The Kurzflügler (Staphylinidae) are a family of beetles and with currently more than 47,000 described species in around 3200 genera one of the largest families at all, but a large number of species has certainly not yet been described. They are grouped in up to 31 subfamilies. There are around 2000 species in Central Europe, around 1554 of them in Germany.

Most of the short-winged birds have an appearance that is extremely atypical for beetles because of their flexible, elongated body with shortened wing-covers ( elytra ) and a more or less unprotected abdomen. They are generally small beetles (2–8 mm), with some species smaller (around 0.5 mm) or larger (up to 40–50 mm).

The body is elongated with mostly parallel sides, rarely short and wide. The coloring is mostly inconspicuous black or brown, occasionally also metallic blue to blue-violet (Paederus, Philonthus), often colored (Oxyporus, Tachyporus); some species are very hairy. The rigid fore wings (Elytren) are very short and leave the largest part (about two thirds) of the abdomen uncovered. This gives the mostly hidden rophies, despite their armor, an unusual mobility for beetles and they can inhabit the smallest cavities and other cryptic microhabitats that are inaccessible to many other animals. Most species are good fliers; some swarm in warm evenings. Despite the short wing wings, the membranous pair of hind wings is usually large and well developed and therefore has to be folded into the rest position in a complicated way in order to fit under the wing wings. The wings unfold very quickly, although the legs have to be used and a comb-like structure on the last abdominal ring must be pulled over the underside of the wing.

Many smaller species are diurnal, the larger ones are usually only foraging at night. Staphylinids occur in practically all terrestrial habitats that are not too dry, and in many ecosystems they are the main component of the macrofauna of the litter and humus layer. They are particularly diverse and numerous in humid habitats, on the edge of various bodies of water (flushing fringes), including cold or salty ones (tidal zone of the sea beaches) ( halophile / halobiont ). Species that inhabit deeper soil layers have diminished eyes and are unable to fly. In contrast to some other beetles, short-winged beetles are a strictly terrestrial group that does not have a truly aquatic species.

Staphylinidae are distributed worldwide. Although the diversity of this family peaks in tropical or moderately humid areas of all continents, the beetles are also quite common in less favorable areas. After all, they are one of the few invertebrate groups that are able to colonize extreme habitats such as deserts, high altitudes in the mountains or high latitudes (near the poles) of the earth. 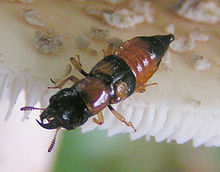 As far as is known, larvae usually appear in association with adult animals, the feeding habits of the larvae generally being the same as those of the sexually mature. Most raven-winged birds are predatory ( carnivorous ) in their eating habits , but some of them feed on fungi ( mycetophag ), decayed animal and vegetable matter ( saprophag ) and, less often, plants (pollen, flower parts) ( phytophag ). Larvae of some species also parasitize on the pupae within the puparium of flies. Some species only live in the nests of birds and mammals. Quite a few species of short-winged species live exclusively in wasp, ant or termite nests ( myrmecophilia ), sometimes there, treated by the ants as members of their nests , throughout their entire development.

The relationships between the beetles and their ant hosts are varied and fascinating: some species hunt the host animals, others eat the carrion in the nest or decimate ants and still others induce their host to choke food for them. The beetle larvae are cared for and fed more intensively by the host ants than their own larvae, deceiving the host by intensely imitating the begging movements and by a substance secreted by skin glands that triggers brood care behavior ( insect pheromones ). Beetle larvae are therefore strong food competitors for the ants' brood.

Others, as hikers, pull out on huntings with the ant army in the rear - or like the mostly symphile forms (i.e. the secretion-donating "breeding products" of those ants), whose specially designed adhesive devices on the feet ensure that these short-winged species sit on the ants' head or back can accompany their forays. 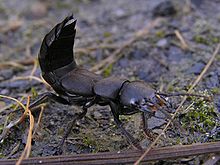 Almost all species are equipped with 1 to 2 pairs, often very large, defensive glands located in the abdomen. The synthesized defense substances are of various kinds and are injected or released in droplets in the event of disturbance, often combined with simultaneous lifting of the abdomen. The humors of certain species of short-winged species contain several poisonous amines . If these get on the skin after the animals have been crushed, blisters and rashes can occur.

These properties in combination with a great reproductive potential and other highly developed traits make the short-winged animals an evolutionarily very successful group of animals.

It is of Pleistocene been reported fossil Staphylinidae from peatlands in northeastern North America and Europe. They seem to belong to recent genera and help to show the earlier distribution of some of today's species. Tertiary fossils have been found in Baltic amber ( Eocene ), Dominican amber (Eocene to Miocene ), and in schists in the United States (Colorado), France, and Germany. Fossils have also been found in deposits from the Middle Cretaceous - Lower Jurassic period in Eurasia . From the chalk also inclusions in Lebanon amber (lower chalk) and in Siberian amber (upper chalk). Most fossil species resemble species of modern subfamilies. The oldest known staphylinids were found in layers from the Upper Triassic (approx. 220 million years ago) in the USA (Virginia).

The more systematic mapping of the fossil animals to the species level is very difficult because the necessary fine-examination of the genitalia in fossils and inclusions ( inclusions ) is not possible.

Some species are occasionally harmful to strawberries and fruit trees, but their importance is certainly no less important than that of other predatory beetles ( ground beetles ) because they decimate pupae and cocoons of forest and agricultural insect pests, recreate bark beetles and fly maggots, and because they eat mold and humus Add components to the soil layers that can be digested for plant nutrition.