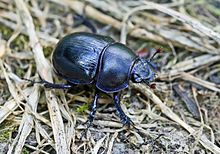 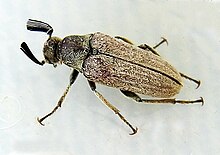 The Polyphaga are a suborder of the beetles (Coleoptera). With more than 320,000 species in 151 families, it comprises the majority of all beetles and is thus not only their most diverse suborder, but also the one with the most strongly derived groups. The grouping confirmed in almost all systematic classifications of beetles was first described by Carlo Emery in 1886.

In the adults, the separation of the pleura of the prothorax and the sclerite that forms the upper side: the pronotum , cannot be seen, the greatly reduced pleura is mobile and fused with the trochantin . The stability of the prothorax is maintained by a suture directly between the anterior section of the prosternum and pronotum. It follows that only one seam between the notum and sternum on the prothorax can be seen, but the other subordinate beetles have two visible seams, between the sternum and pleurum and between the notum and pleurum. The wing folding also differs from that of the other three subordinates. These two transverse veins are located between the posterior branch of the radial artery (RP) and the posterior branch of the median vein MP1 + 2 (MA is fused with RP in the beetles and not visible) , which delimit a distinctive cell called the "oblongum" becomes. In the Polyphaga there is no cell formation and a maximum of one cross vein between the radius and the median. The corresponding wing area is therefore more flexible and can be folded in when the wing is folded.

The group's monophyly is supported by the traits described above that may represent autapomorphies . However, some scientists evaluate the same characteristics differently; depending on the interpretation of the phylogenetic relationship inside and outside the beetle order, it could also be a question of symplesiomorphies . In addition to these characteristics, the merging of the Propleura with the Trochantin is a derived characteristic of the Polyphaga, which also occurs in the Myxophaga and therefore supports a sister group relationship between these subordinates. With this subordination, the Polyphaga also share the property that the larvae lack a leg segment on their five-limbed legs and they only have a single claw on the tarsi . The absence of the sterno-coxal muscle on the prothorax and the coxa-subalar muscle on the mesothorax are probably further autapomorphies of the polyphaga. In addition, only the Polyphaga have two sclerotized braces in the neck area, the cervical sclerites.

The group's monophyly is also strongly supported by molecular pedigrees (based on homologous DNA sequences).

On the basis of the basal limbs of the abdomen, Kolbe distinguished two large groups within the Polyphaga in his work from 1908. The Haplogastra include the taxa in which the second segment has remains of the pleura and sterna on the side, in the Symphiogastra the second is fused with the third sternite and hidden below the hips ( coxes ) of the hind legs. Although these two groups are also supported by a work by Kukalová-Peck & Lawrence from 1993, which differentiates between a “hydrophilic” and a “eucinetoid” line of the Polyphaga based on features on the wings, and also the monophyly of these groups A cladistic study of larval and adult characteristics by Hansen in 1997 is confirmed, it is still unclear whether this subdivision is justified. Beutel & Leschen note that the work of Kukalová-Peck & Lawrence referred to a single, albeit complex, system of characteristics and that Hansen's work was mainly based on the Staphylinoidea and Hydrophiloidea and, furthermore, only three species from the Scarabaeiformia and the "eucinetoid" line included. In addition, recent studies show a need to revise the classification of the Polyphaga, since the structure of several high sub-taxa became doubtful after molecular genetic studies. For example, B. numerous features indicate that the Scirtoidea do not belong to the Elateriformia, but represent the most original Polyphaga.

The Polyphaga are currently divided into five sub-orders with 16 superfamilies :