The arum family (Araceae) are a family of plants within the monocotyledons (monocotyledons). The family includes 115 to 129 genera with 3270, 3305 or 4025 species depending on the definition . They are distributed almost all over the world, but most species are found in the tropics .

Spadix in the area of ​​the male flowers of Amorphophallus titanum

The characteristics of the Lemnoideae often differ greatly from the other Araceae.

The species of the arum family are evergreen or seasonal green, mostly herbaceous plants , and can be from tiny (Lemnoideae) to meters high. There is a broad spectrum of life forms: in addition to many terrestrial species there are epiphytes , lithophytes or climbing plants , many species are geophytes ; the Lemnoideae are plants floating on or under the surface of the water. Some species of the Lemnoideae lack roots. Many species form aerial roots or rhizomes or tubers as underground perennial organs . Sometimes bulbils are formed , for example on the leaves, for vegetative reproduction. Many species form above-ground, independently upright, climbing to creeping stems , which are often green. The stems of some taxa are reinforced ( e.g. Montrichardia ). Often there are prophylls and / or cataphylls under every leaf .

The alternate, only basal or distributed on the stem have leaves in most species with a petiole with a leaf sheath at the base. The very differently shaped leaf blades can be undivided or divided in different ways. Often the base of the spade is heart-shaped or arrow-shaped; sometimes the leaf is shield-shaped (peltat).

The membranous prophylls and / or cataphylls are below the inflorescences. Often there is a leafless inflorescence stem. Most Araceae have an inflorescence typical of this family with an unbranched piston, called a spadix , which usually contains many flowers, and a single bract , called a spathe , which more or less surrounds the cob. The spathe usually has a tubular base, the edges of which can be fused and have a durable to more or less rapidly perishable bract blade.

The flowers are two or three-digit. In hermaphrodite flowers there are six, four or no mostly free bracts . Usually four to six, rarely up to 22 stamens and one ovary are present. Your stamens are free and the dust bags have two counters. Three fruit leaves are a mostly dreikammerigen or sometimes unilocular ovary grown.

Single-sex flowers are almost always missing bracts, only three African genera, including Zamioculcas , have them. Male flowers usually have two to four (one to six) free stamens or two to twelve (rarely up to 32) stamens that have grown together to form a "synandrium". They open at their tips with pores or straight to horseshoe-shaped slits. In most genera, the pollen grains have no apertures and no sporopollenin ; the exine has very different patterns. Staminodes are sometimes present in the female flowers . The female flowers fruit leaves are single-chamber to a mostly, sometimes three to vierkammerigen, mostly upper constant ovary grown. There are one to many ovules in each ovary chamber . The stylus, which is usually barely recognizable, ends in a scar that is moist during anthesis and is sometimes clearly lobed.

In the Lemnoideae, the inflorescence (which is rarely found) is reduced to one or two flowers and the unisexual flowers contain only one or two stamens or only one carpel with one to seven ovules.

They form one to many-seeded berries . The berries are usually found individually in the fruit stands or they rarely form a collective crop in the Cryptocoryne or Syngonium . The berries usually stay closed or in the Monstereae without Amydrium they burst. The berries stay green or when ripe they usually turn red, white or yellow, rarely blue. The berries are sometimes juicy. Endosperm is abundant or absent.

In spring you can spot the arrow leaves of the spotted arum ( Arum maculatum ) in the deciduous forest. The brownish bulb (spadix) gives off a musty, urine-like odor that some insects find irresistible. Trap hairs on the constriction in the lower third prevent the insects from escaping prematurely. Only after sufficient pollen has passed from the male to the female arum flowers does the prison open again. The lizard root ( Typhonium venosum ) has a similar pollination mechanism .

Other arum plants such as the genera Flamingo flowers ( Anthurium ), Spathiphyllum or Zantedeschia seem to be particularly attractive to male bees due to the color of their bracts and their scent.

As a special feature, the Araceae with their alternative respiratory chain have developed a way to produce heat in the spadix. The Arum maculatum species, for example, uses this heat development to better evaporate the scents of flowers (carrion odor) and thus attract insects . Other species such as Symplocarpus foetidus, on the other hand, protect their inflorescences from frost and cold damage through the heat generated in the mitochondria of the central flower stalk: the plant is able to keep its internal temperature constant at 20 ° C even at ambient temperatures below freezing point . 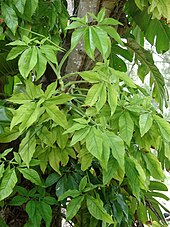 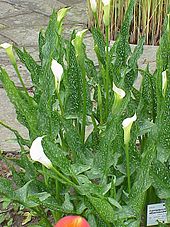 The Araceae family was established in Familles des Plantes in 1789 by Antoine Laurent de Jussieu . Heinrich Wilhelm Schott published in Genera Aroidearum in 1858 and in Prodromus Systematis Aroidearum in 1860 the first classification of the Araceae with a narrow genus concept based on flower characteristics. A clearly different classification of the Araceae was created by Adolf Engler from 1876 with revisions up to 1920 based on vegetative and anatomical features. These two systems competed with one another until the last decade of the 20th century molecular biological studies provided additional data.

Overview of the distribution

The Araceae family is found almost worldwide. Most species thrive in the tropics . Of the 3305 species accepted in the Araceae family in 2012, around 1889 are distributed in the Neotropic , around 1105 species occur in Asia , 152 species are found in Africa , 23 species are native to Australia , 78 species are distributed in the Mediterranean region, 20 species occur only on the Mascarene Mountains and in North America there are only 7 species. Only 2 species thrive in the boreal zone and 29 species have a circumtropical distribution. In Central Europe only the genera Arum ( Arum ), Dragon Arum ( Calla ), Dwarf Duckweed ( Wolffia ), Pond Lentils ( Spirodela ) and Duckweed ( Lemna ) occur naturally; the threefold pinellia ( Pinellia ternata ) has overgrown from botanical gardens.

The Araceae family includes around 115 genera with around 4025 species . The relationships and biogeography of the Araceae are now relatively well investigated using molecular sequence data. Of these, the duckweed family (Lemnaceae) were treated as an independent family until recently and are now assigned to the Araceae as the subfamily Lemnoideae, so that the Araceae are monophyletic . The Araceae family is divided into eight subfamilies .

The cladogram of the Araceae family with its eight subfamilies today:

The eight subfamilies are listed here with their branches and genera:

Popular houseplants with decorative leaves or inflorescences come from the genera window leaves ( Monstera ), Baumfreund ( Philodendron ), Dieffenbachia ( Dieffenbachia ), flamingo flowers ( Anthurium ), Kalla ( Zantedeschia ), Syngonium and single leaf ( Spathiphyllum ). Varieties of a number of species of the arum family play a major role in floristry , for example from the genera flamingo flowers ( Anthurium ) and kalla ( Zantedeschia ). Some species of the arum family are also used in the aquarium hobby, for example the dwarf pear leaf ( Anubias barteri var. Nana ) and a number of water goblets ( Cryptocoryne ).

An important food crop is the taro ( Colocasia esculenta ), whose starchy bulbs are used.