Hokkaidō (  [ hokːaidoː ] , Japanese 北海道 for northern sea district or according to an English-language guideline of the Japanese land surveying office as Hokkai [-] dō for prefecture Hokkai / northern sea prefecture ), formerly known as Ezo or Yezo , is by far the largest prefecture in Japan , the consists mainly of the island of the same name and is the second largest island in Japan after Honshū . Coincident with the prefecture, Hokkaidō also designates a region in Japan . The largest city and also the seat of the prefecture administration is Sapporo .

Hokkaidō is the home of the Ainu people, from whose language many geographical names on the island, for example the name of the capital Sapporo, originate.

The first Japanese settlements emerged in the 15th century in the south of the island as trading posts. Since the usual forms of agriculture in Japan were unusable on the island due to the cool climate, most of the island was only settled by the Japanese in the second half of the 19th century . At that time, western innovations made agriculture possible here too, and at the same time there was an increasing need for defensive positions against Russia . The island only got its current name at this time. The capital Sapporo emerged in the 1860s; In the 1870s, the island's population quadrupled from 58,000 to 240,000.

Shortly after the Boshin War in 1868, a group of Tokugawa loyalists, led by Enomoto Takeaki , claimed the island as the Republic of Ezo . This uprising was put down in May 1869.

Seat of the Hokkaidō authority

On July 8, 1869, the Development Authority ( 開拓 使 kaitakushi ) was established and on August 15, Hokkaidō was subdivided into eleven provinces : Chishima , Hidaka , Iburi , Ishikari , Kitami , Kushiro , Oshima , Shiribeshi , Teshio and Tokachi . After the abolition of the principalities and the first consolidation of the prefectures in 1871, part of the province of Oshima, the former prefecture of Tate (previously the principality of Matsumae / Tate) on the southwestern tip of the island, initially briefly belonged to the prefecture of Aomori and was not transferred to the Hokkaidō development authority until 1872. On February 8, 1882, the development authority was dissolved and divided into the three prefectures of Hakodate, Nemuro and Sapporo. The prefectures were dissolved on January 1, 1886 in favor of the newly founded, directly subordinate to the Ministry of the Interior Hokkaidō authority ( 北海道 庁Hokkaidō-chō ) with headquarters in Sapporo and branch offices ( 支 庁shichō ) in Hakodate and Nemuro. On November 2, 1897, today's 14 branch offices and the Shana branch were established. In December 1903 Shana Nemuro was slammed. On May 3, 1947, the Hokkaidō authority was dissolved and the Hokkaidō prefecture was established.

It was not until 1901 that Hokkaidō received an elected parliament like other prefectures (-fu / -ken) . The governor remained part of the imperial government as Hokkaidō-chō chōkan (thus about "head of authority") - but in principle the governors of other prefectures ([fu / ken-] chiji) were also closely tied to the Ministry of the Interior. Only after the Pacific War was Hokkaidō fully equated with other prefectures: In 1946 some of the special laws for Hokkaidō were abolished, the prefectural order (until then fu-ken-sei ) was extended to the -dō and renamed dō-fu-ken-sei . In 1947, the post-war constitution and self-government law expanded self-government in all prefectures (henceforth -to / -dō / -fu / -ken) and their communities. As in other prefectures, the governor is now called [dō-] chiji and is elected by the people.

In Russia, the island of Hokkaidō is considered a Russian territory by Cossacks . During the Russian expedition headed by IM Antipin-DJ Shabalin 1778–1779, Russians landed in the north of Hokkaido and brought the local residents (Ainu) into Russian citizenship. Many residents were baptized. In Russia there are regular rallies under the motto "Hokkaido - the Russian island".

With the establishment of the development agency, the Meiji government wanted to change the name. The researcher Matsuura Takeshirō made these six suggested names: Kitakaidō ( 北 加伊 道 'North Kai District'), Kaihokudō ( 海北 道 'North Sea District'), Kaitōdō ( 海東 道 'East Sea District'), Hitakamidō ( 日 高見 道 ), Tōhokudō ( 東北 道 'Northeast District') and Chishimadō ( 千島 道 '1000 Islands District'). Finally, as a compromise between Kitakaidō and Kaihokudō and based on the historical regions of Gokishichidō Tōkaidō (' Eastern Sea District'), Nankaidō ('South Sea District') and Saikaidō ('Western Sea District') , the name Hokkaidō was chosen. Matsuura suggested Kitakaidō because the Ainu called the region Kai . Historically, the Ainu and its islands were referred to as Kuyi, Kuye, Qoy, etc., which could be connected to the early modern quay. Kai also closely resembles the Sino-Japanese reading of the characters 蝦 夷 /ka.i/ - more common Kun reading / emisi / - which were used in China and Japan to denote the Ainu and related peoples for over a thousand years. It is possible that Matsuura's Kai one affected by this Sino-Japanese reading variant of Niwchisch - exonym was Qoy for the Ainu.

In addition to the main island with 77,984.41 km², the prefecture consists of many offshore islands in the adjacent seas, the Sea of ​​Japan , the Pacific Ocean and the Sea of ​​Okhotsk . The Kuril Islands directly to the northeast have been administered by Russia since the end of the war ; Japan, however, sees the South Kuril Islands as part of Hokkaidō and is still unsuccessfully demanding their return. The highest point is the Asahidake with 2290 meters above sea level. In the south, Hokkaidō borders the Oshima Peninsula on the Tsugaru Strait , which separates the island from the Japanese main island of Honshū . In total, in addition to the main island, the Hokkaidō region has 508 other islands with a total area of ​​5440 km². Apart from the de facto Russian southern Kuril Islands, the largest islands in Hokkaidō after the main island today are Rishiri , Okushiri and Rebun .

Hokkaido is located in a temperate monsoon zone with a subboreal climate; H. with quite cold and snowy winters. There are active volcanoes on the island .

There is a ferry service to Honshu from the southern ports in Hakodate and Tomakomai . Other ports on Hokkaido are Wakkanai and Abashiri on the north side and Kushiro and Akkeshi on the east coast .

Since 1988, the two islands of Hokkaidō and Honshū have been connected by the second longest tunnel in the world, the 54 km long Seikan railway tunnel under the sea. Initially only with a 1067 mm cape gauge, from 2016 with three-rail track for the Hokkaidō-Shinkansen high-speed railway .

There is an HVDC transmission between Hokkaidō and Honshū for the transfer of electrical energy.

Naomichi Suzuki has been the governor of Hokkaido since 2019 . The former mayor of Yūbari won the 2019 gubernatorial election (part of the unified elections in April 2019 ) with center-right support against the center-left-supported former lower house MP Tomohiro Ishikawa . Hokkaidō had previously had a conservative governor in Harumi Takahashi since 2003. Before that, left-wing governors had ruled since 1983.

The now 100-member parliament of Hokkaidō was also re-elected in the 2019 unified elections. The Liberal Democratic Party won an absolute majority with 51 seats, the Constitutional Democratic Party received 24 seats and the Independents 14. A total of eleven MPs were women, three of them from the LDP, five from the KDP and two out of three Communists.

In the national parliament , the Hokkaidō represent twelve directly elected representatives in the House of Representatives , the lower house, and six in the council house , the upper house. After the 2017 general election , the majority electoral MPs from Hokkaidō are six Liberal Democrats , one Kōmeitō member and five Constitutional Democrats . After the 2016 and 2019 elections and party reshuffles that have taken place since then , Hokkaidō will be represented in the Council House by three former Democrats ( KDP 2, DVP 1) and three Liberal Democrats, including ex-Governor Takahashi. In terms of proportional representation to the House of Representatives, Hokkaidō is the only prefecture next to Tokyo that forms a proportional representation block , which elects eight members.

The Hokkaidō prefecture, the largest in terms of area, is one of the financially weaker prefectures in the country, despite its comparatively large population. In addition to the already declining population across the country, many rural areas are severely affected by migration to the cities; with the former mining town of Yūbari , Hokkaidō is now the only insolvent city in Japan. 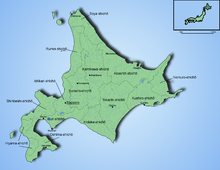 The Hokkaidō Prefecture is divided into nine Sōgō Shinkō-kyoku ( 総 合 振興 局 , literally Velvet Funding Office , English General Subprefectural Bureau ) and five subordinate Shinkō-kyoku ( 振興 局 , literally Funding Office , English Subprefectural Bureau ). These were set up on April 1, 2010, but go back directly to the previous 14 Shichō ( 支 庁 English Subprefecture ). As administrative level they resemble the present in some German states, administrative districts and enable effective management, even for the very large by Japanese standards, and in winter inaccessible parts of the prefecture.

As early as the second half of the 1980s, the population of the Hokkaidō fell for the first time, since 1995 the prefectural population has decreased with every census.