The prefecture of Kagawa ( Japanese. 香 川 県 , Kagawa-ken ) is a prefecture of Japan and is located in the north (east) of the western Japanese region Shikoku on the main island Shikoku and over 100 other islands in the Seto Inland Sea . The seat of the prefecture administration is the city of Takamatsu .

A first Kagawa Prefecture emerged in 1871 in the Sanuki Province from the principalities of Takamatsu , Marugame and parts of the Kurashiki Prefecture, which emerged from Shogunate land . Kagawa has been finally independent since 1888, when it was separated from Ehime . 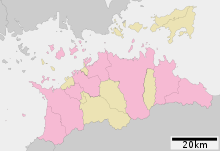 The prefecture is divided since 2006 into eight independent cities ( Shi , 市 ) and nine (kreisangehorige / small) cities ( Chō , 町 ), the six counties ( Gun , 郡 ) are organized.
After the introduction of today's forms of commune, there were 182 congregations in 1889, only one of which was independent and five of which were part of a county. In 1953 there were 157 municipalities, in 1960 there were 44 and on September 1, 2003 there were still 7 urban and 30 urban districts. With the incorporation of the last village on February 15, 1970, all villages ( mura ) in the prefecture disappeared.

In the table below, the districts (郡) are shown in italics, with the small towns (町) below them (indented). The prefectural affiliation of a regional authority can be seen in the first two digits of the regional authority code (1st column), a connection between the district and the associated municipalities in the third. The independent cities are at the beginning of the table.

Political groups in the prefecture parliament
(as of April 30, 2019)
A total of 41 seats

The 22-story main building of the prefecture administration, completed in 2000.

The governor of Kagawa has been Keizō Hamada since 2010 , who, with the support of the major political parties, was elected to succeed Takeki Manabe . In the 2018 gubernatorial election , Hamada was re-elected for a third term against the communist Eiji Himeda with the support of the LDP, DVP, Kōmeitō and SDP. The 41-member parliament was elected in the unified regional elections in April 2019 , the Liberal Democratic Party (LDP) held a clear absolute majority with 27 seats. However, their group split for the first time in May 2016 and again in July 2017, so that at times there were three LDP parliamentary groups in Kagawa's parliament.