For the first seven years of his life, Roger Chaffee grew up in Greenville , Michigan , with his parents Don and Blanche Chaffee. Don Chaffee was a biplane - pilot who deals with passenger and parachute flights as a staff pilot of the US and 1942 artillery earned his money. When he took his son on a flight over Lake Michigan at the age of seven , it was immediately clear to him that he wanted to become a pilot.

Roger Chaffe's interests at a young age were model flying and music , which he became interested in from school. He learned wind instruments and started a dance combo with others in high school .

When he was thirteen, Chaffee joined the local boy scouts , where he quickly earned his first badges of achievement. At school, his interests were in science subjects like math and chemistry . Electronics aroused his particular interest .

From high school to navy pilot

After graduating from school in 1953, Roger Chaffee applied to several universities and finally began his studies in the fall semester at the Illinois Institute of Technology in Chicago , for which he received a scholarship from the US Navy through the Naval Reserve Officer Training Corps (NROTC) program. In 1954 he decided to combine his passion for flying and technology in his studies and to become an aerospace engineer. This was best accomplished at Purdue University in Lafayette , Indiana .

He met his wife from Oklahoma City in September 1955 , and they both married in August 1957.

On June 2, 1957, Roger Chaffee received his bachelor's degree from the university , where he also passed the test for his pilot's license shortly before . His military flight training continued in Pensacola , Florida , where he flew the Beechcraft T-34 Mentor and the North American T-28 Trojan. He later trained on the Grumman F9F Cougar Jet in Kingsville , Texas .

After completing his flight training, he went through various flight jobs in the Navy until he was a quality officer with the Heavy Photographic Squadron 62 based in Jacksonville , Florida . One of the tasks was taking photos of the newly built Cape Canaveral .

From the Navy to NASA 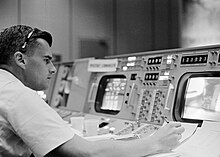 Roger B. Chaffee during the Gemini 3 flight at the CapCom console

After the first Mercury - astronauts were named Roger Chaffees interest steered in that direction. He geared his further education and training to the goal of being selected as an astronaut.

In 1963 the third group of astronauts was recruited by NASA ; Chaffee was one of a group of 1,800 applicants.

In 1962, Chaffee was offered a master's degree in industrial engineering in Dayton , Ohio . He moved with his family, but without neglecting the astronaut selection tests. NASA advised his family of his selection when he was on a hunting trip. On October 18, 1963, Chaffee flew to Houston and was officially accepted into the astronaut corps.

In 1964, after the family moved to Houston, Roger Chaffee began training as an astronaut. This included not only further flight training, but also survival training for faulty land or water landings , as well as studying the surface of the moon , as the third group of astronauts had to prepare for the moon landing . The training units also included EVA training (space exit) in a large pool of water.

When astronaut Theodore Freeman was killed on a training flight on October 31, 1964 , Roger Chaffee had the honor of carrying the coffin with other colleagues at the funeral . This was repeated with astronaut Elliot See , who crashed two years later with his colleague Charles Bassett .

One of Chaffe's first major tasks was to act as a communications assistant on the Gemini 4 mission in June 1965. Together with Gus Grissom , he also flew a mission as an escort pilot on an unmanned Saturn 1B mission to photograph its launch. 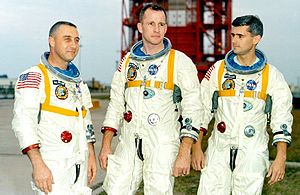 Shortly after the flight of Gemini 8 with Neil Armstrong and David Scott in March 1966, NASA announced the crew members for the first manned Apollo mission. Gus Grissom was named as commander , along with Ed White as chief pilot and Roger Chaffee as pilot. The mission was scheduled to start in the spring of 1967.

Over the next several months, the crew in Downey , California got to know their Apollo spacecraft CSM-012, which was assembled at the local facility, by heart.

Since the Apollo spacecraft had not yet reached the mature status of the Gemini predecessor models, the start was postponed and further tests were scheduled.

A crucial test took place on January 27, 1967 on the launch pad in Cape Canaveral . The entire crew, namely Grissom, White and Chaffee, took their places in the command module to carry out a plug-out test . However, during the test, the interior of the capsule caught fire (probably from a short circuit or an electric arc ). All three astronauts were killed.

Chaffee was buried in Section 3 next to Gus Grissom at the American National Cemetery in Arlington near Washington with a state funeral.