An electrical short circuit is an almost resistance-free connection between the two poles of an electrical voltage source , or more generally two circuit points with normally different potentials, through which the voltage between these parts drops to a value close to zero. This term describes both the physical connection (without current flow) and the event of extreme current flow through this connection as soon as it or the voltage source is activated.

In contrast to electrical connections that are used for shielding or field control , a short-circuit connection can cause a high current to flow, which is usually a multiple of the operating current. This high short-circuit current is caused by the low ohmic resistance (see Ohm's law ).

Mobile and stationary earthing and short-circuiting devices are used for maintenance work on switchgear and overhead lines .

Large capacitors (power capacitors ) must be short-circuited during storage and transport to ensure that they are discharged and that they do not pose a risk if the connections are touched, even if a certain discharge time is specified according to the VDE. It is not enough to discharge a capacitor once, as the dielectric absorption allows new charges to migrate from the dielectric to the electrodes .

ESD - sensitive electronic components ( MOSFET , IGBT , ICs ) are often short-circuited prior to installation for transport and safe handling in order to avoid damage from electrostatic discharges. Static charges generate voltages of several thousand volts , which would otherwise destroy the components when discharged.

In the event of a short circuit between the poles of a battery or live external conductors, or an external and neutral conductor of a three-phase system , the current reaches its maximum value, the "initial short-circuit current ". This current is limited only by the resistance of the line and the series internal resistance of  the voltage source . The short circuit current  is therefore:

Short circuits are mostly caused by defective insulation or by a switching fault in electrical systems or circuits. Short circuits between all outer conductors L1 / L2 / L3 are called three-phase short circuits. All short-circuit currents are recorded by protective devices and the current-carrying conductors are switched off by miniature circuit breakers or fuses.

In the case of underground cables , it can be difficult to locate the short circuit, since it is often impossible to expose the cable along its entire length.

A short circuit can have the following causes: 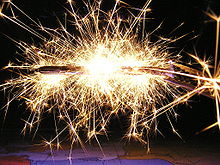 In the event of a short circuit across a fault resistance, an arc with a characteristic arc voltage can occur. The arc is highly non-linear, it does not limit the current and causes high temperatures (5,000 to 15,000 ° C) and interference voltages. Due to its thermal and ionizing effects, other insulating components can be damaged.

Since the arc ignites with each half-wave of the alternating current after the voltage has passed zero at a higher voltage than it goes out, it causes a phase shift of the current as in a phase control .

In three-phase networks, a three-pole (symmetrical), two-pole (between each two of L1, L2 or L3) or a single-pole (asymmetrical, between L1 and earthing devices) short circuit can occur.

The "two-pole short circuit" is the one in which the largest short-circuit current flows in three-phase networks, since the three-phase voltage source is relatively lightly loaded despite the short circuit and therefore still has most of the energy reserves available in this short circuit. In addition, there are asymmetries which can lead to overvoltages in the other conductors.

Electrotechnical regulations and guidelines for calculating the short-circuit current for electrical (high-voltage) switchgear can be found in VDE standard 0102.

Size of the short-circuit current

The maximum expected short-circuit current therefore depends on the internal resistance or the network impedance of the power network and its nominal voltage. Overload protection switches (circuit breakers , miniature circuit breakers , fuses ) must be able to switch off this current. In house installation networks it is around 500 to 3000 A.

Failure to limit the short-circuit current or the short-circuit-like fault current can lead to damage due to overheating (further insulation damage, fires ) in the course of the lines or cables or the electrical switchgear components if these are not protected by fuses that are not adapted to the cross-section of the cable .

In extreme cases, wires affected by the short circuit can suddenly evaporate and trigger an arc. If an arc occurs, there are further hazards due to radiant heat, metal splashes and the pressure wave. Modern medium-voltage switchgear are equipped with pressure relief flaps that switch off the feeder circuit breaker via a contact.

To prevent the consequences of short circuits, so-called miniature circuit breakers and fuses of various characteristics are used in low-voltage networks . When a high short-circuit current occurs, fuses must “blow” and disconnect the short-circuit point from the rest of the supply network as quickly as possible . The switching off must be made depending on the system very quickly (maximum in 1 / 10 -Sekundenbereich) depending on characteristics of the application range (household installation, electronics protection, control protection, etc.) are different to the effects of the voltage dip and the short-circuit current be kept low.

In the high and medium voltage networks, network protection relays are used that can detect a fault and its location based on current and voltage measurements and switch off the corresponding parts of the network by means of a circuit breaker. The so-called automatic reclosing  (AWE) is used for overhead lines , since a brief "branch drop" should not lead to a shutdown. In the event of a trip, the circuit breaker (s) will be switched on again after approx. 250 ms (short interruption); If the error still occurs, the circuit breaker finally switches to the OFF position: AR successful - error is gone, AR unsuccessful - error still exists. Railway power substations , too , often carry out one or more automatic reclosures a few seconds after a short-circuit shutdown in order to enable the relevant section to continue operating in the event of certain faults (arcing caused by lightning strikes or birds).

The mechanical strength, e.g. B. of exposed busbars must be measured in AC voltage networks according to the largest occurring short-circuit impulse current. This short-term current surge is linked to the initial short-circuit alternating current via the surge factor κ. The factor κ is in the range from 1 to 2 and is determined by the effective resistances and reactances in the short-circuit path. The mechanical loads show a dynamic behavior due to the mains frequency.

Particularly large forces occur in short-circuits close to the generator and cause mechanical damage or - in the case of oil-filled transformers - transformer fires that are difficult or impossible to extinguish. Power transformers are therefore often set up outdoors and separated from their surroundings by appropriate concrete walls.

Transformers for converting the level of the mains voltage (230 V) to protective extra-low voltage below 50 V can be designed so that the magnetic core has a sufficiently large leakage flux to limit the primary-side current in the event of a secondary-side short circuit. A similar principle applies to welding transformers , which are short-circuited on the secondary side for operational reasons.

Typical applications are bell transformers and small toy transformers, which are formally designed as conditionally short-circuit-proof according to VDE 0551 and EN 60742. The primary current flow must also be limited to protect against short circuits in the supply lines. Further protection is usually provided by a thermal protection device that separates the primary current flow when a core temperature is exceeded until it cools down.

Short circuit at the inputs and outputs of electronic devices

In order to check an electronic device to determine whether there is interference at the input of a device, it is often helpful to "short-circuit" the inputs (NF inputs, antenna socket). This is "technician jargon". It is more correct to say that the inputs should be bridged, because no current will flow, but interfering signals are diverted to ground. In this way one can isolate the source of interference.

On the other hand, it is usually not possible to short-circuit an output (e.g. loudspeaker connection of an amplifier , antenna connection of a transmitter ) without damage . Such short circuits do not cause any danger, but usually lead to overloading and destruction of the output stages or individual components ( transistors , etc.).

Accumulators can, depending on their type, deliver considerable short-circuit currents, which can not only damage or destroy the accumulators, but also cause property damage and personal injury.

Car starter batteries ( lead accumulators ) can deliver over 1000 A, for example, which can lead to cable fires in the event of a short circuit - a common cause of fire in car accidents. If a short circuit occurs when working on the pole terminals of the starter battery due to a conductive tool or piece of jewelry (metal watch strap or ring), this can cause burns and / or metal splashes. Therefore the rule applies that the earth connection (-) must always be loosened first and connected last.

In redundant and diode-decoupled battery systems with a DC voltage of 220 V, there is an intentional short circuit in the event of a double fault: In the event of a (-) earth fault on battery 1 and a (+) earth fault on battery 2, or vice versa, an impermissibly high voltage is created (due to both Earth faults caused series connection of both batteries: max. U1 + U2 = 440 V). With a rigid connection of both (-) poles, these two faults cause a short circuit to earth and thus an upstream overcurrent protection device switches off safely. This avoids overload due to an impermissible increase in voltage on the consumer.

The surge short-circuit current  is decisive for assessing and calculating the mechanical strength, in particular of

The surge short-circuit current is the highest instantaneous value of the alternating current after the occurrence of the short-circuit and is specified as the peak value.

Factor between 1.02 and 2 depending on the ratio of the resistance  to the reactance of  the short-circuit path

The overvoltage (another term)

The physical and technical opposite of a short circuit is the electrical interruption. If a constant current source is interrupted , an overvoltage can occur without protective measures. In principle, this is the case when there is a charged inductance in the circuit . Thus, in certain cases, an interruption can also pose a danger.