A dielectric (plural: dielectrics) is an electrically weakly or non-conductive substance in which the charge carriers present cannot move freely. A dielectric can be a gas, a liquid or a solid. The term dielectric is used in particular when there is an electric field in the area of ​​space under consideration (from the Greek dia-: “through”, i.e. the field goes through the material).

The field sizes of the dielectric are the electric field strength and the electric flux density . You are in the electrostatic , i.e. H. time-constant case and linked in an isotropic medium by the permittivity via the following relationship:

The permittivity is the product of the electric field constant and the material- specific , dimensionless relative permittivity :

Insulators such as the insulating material between capacitor plates , coaxial cables and the like are called dielectric. Also antennas can have function-determining dielectric components.

The liquid in an electrical discharge machine , which prevents the electrode sparks from being too long, is also called a dielectric.

Insulating materials that only serve to electrically isolate conductive parts from one another are generally not referred to as dielectrics, although their dielectric properties can be decisive for their functioning.

Polarization of a dielectric 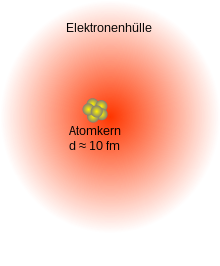 Since the charge carriers cannot move freely in a dielectric, they are polarized by an external electric field . A distinction is made between two types of polarization:

The capacitance of a capacitor essentially depends on the dielectric used and its relative permittivity , the electrode area A and the distance between the electrodes.

The following applies to a plate capacitor:

An important parameter of a dielectric in capacitors and cables is also its breakdown strength , that is at what voltage the dielectric its insulation properties lost and there will be arcing between the capacitor plates or wires.

Depending on the application, the dielectric loss factor also plays a role in capacitor dielectrics. With alternating voltage it leads to the heating of the capacitor. The pronounced dielectric absorption of some materials can lead to a partial recharge of a capacitor after a complete discharge by short-circuiting.

The insulating material between the conductors of a cable (especially high-frequency and coaxial cables ) is also referred to as the dielectric , which essentially determines its line impedance and the frequency-dependent attenuation per length (usually given in decibels [dB] or neper [Np] per km).

Dielectric antennas, resonators and dielectric waveguides are used in high-frequency technology and obey the same laws of refraction as in optics or fiber optic cables .