Phase control and phase control serve as power controllers for electrical consumers that are operated with alternating voltage . Typical applications are dimmers , the torque control of AC motors (e.g. electric hand drills ) or the current setting for resistance welding with alternating current. It is a form of pulse width modulation (PWM). 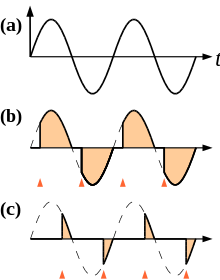 Phase angle control: (a) line voltage as a function of time, (b) and (c) output voltage at high and low power. Small arrows indicate when the triac is fired.

With phase control, the current flow is usually controlled by a triac (antiparallel connection of two thyristors ). After the AC voltage (and the current) has passed zero, the triac does not conduct the current until it receives an ignition pulse; from this point in time (this "phase" of the alternating current signal) the consumer is supplied with energy (until the next zero crossing). The later the triac is ignited, the lower the average power.

The phases of section controllers are for capacitive not suitable loads (due to the sudden voltage rise, it would be a very high current flow), this phase section controls are used. In contrast, phases from non-cut controls for inductive loads suitable (peak voltage during turn-off of the current).

So-called universal dimmers automatically recognize whether there is an inductive or capacitive load and accordingly act as a phase-to-phase control.

RMS value of the voltage

To calculate the effective value of the voltage, it is sufficient to integrate over half a period of the voltage curve, since both sine half waves experience the same phase angle:

Advantages and disadvantages of phase control

The advantage of phase control (and phase control) compared to circuits in which the voltage is regulated by a resistor is its very low power loss. In contrast to complicated, controllable switched-mode power supplies , which also have a low power loss, phase-angle control is much simpler, smaller and less prone to failure. The variable transformers also used for power control are much larger and heavier than phase control systems.

The consumer receives a non-sinusoidal voltage from the phase control or phase control. While this is not a problem for ohmic consumers such as incandescent lamps and heating resistors, electronic devices that are connected to a phase control can be damaged as a result.

In transformers , e.g. As for halogen lamps is one hand it is important to ensure that the phase control suitable for this application, on the other hand should not: Caution should be exercised (ie the dimmer..) Switching power supplies as they are increasingly used today in phases to be connected cut controls. The transformer can be thermally overloaded due to the increased proportion of harmonics of the fundamental wave in the output current of the controller.

However, there are phases from cutting controls that are suitable for electronic voltage transformer. Switching power supplies can be recognized by the fact that they are much smaller and lighter than transformers of the same power. With universal dimmers with automatic load detection, both transformers and switched-mode power supplies can be used. Most leading edge controls (dimmers) are not suitable for fluorescent lamps or energy saving lamps .

The biggest disadvantage of phase control (and phase control) is the non-sinusoidal course of the current. Because current and voltage do not have the same shape, distortion reactive power occurs. The lagging shift of the current compared to the voltage curve has the same effect as an inductive load that is only tolerated by the electricity supply company for small outputs. With high powers, therefore, either a vibration packet control that does not cause a phase shift must be used, or the basic circuit of the phase control must be expanded in order to achieve the same or at least to reduce the phase shift.

In order to avoid or reduce the phase shift at high outputs, the basic circuit of the phase control is extended. There are two ways of doing this:

Both of the above controls are also used for electric locomotives that are operated with alternating current (thyristor control).

The picture on the right shows the simplified circuit diagram of a phase control. The lamp La is controlled via the triac Tr, which is ignited via the diac Di. R1 and C1 reduce the hysteresis and R2 and C2 form two phase shifters that delay the AC voltage, so the threshold voltage of the diac is only reached long after the zero crossing and the triac only ignites shortly before the next zero crossing of the AC voltage. With the potentiometer P a less delayed alternating voltage can be "mixed in". The smaller its resistance, the earlier the diac and the triac ignite and the brighter the lamp shines.

To simplify matters, important circuit components (fuse, interference suppression choke and capacitor, RC element on the triac to protect it) have not been shown in practice. Today, integrated circuits are often used to control the triac (or thyristor) , e.g. B. the TCA 785. 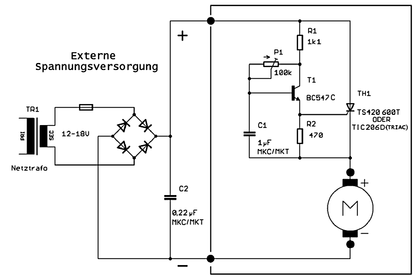 Thyristor control with double the mains frequency for a DC motor

A speed control designed for mains or alternating voltage supply for direct current motors preferably built into small tools can be based either on a thyristor or triac control. In the example shown of an industrial design for tool motors with a power consumption of up to approx. 50 W, the bridge rectifier provides half-waves directed only in one polarity range, so that the phase control or the motor clocking takes place at twice the line frequency. The thyristor or triac is ignited when the base-emitter voltage has risen from T1 to approx. 0.65 V, so that R1 is switched through to the gate and the ignition voltage is thus supplied. The switching threshold or the phase control angle is determined by the timing element from P1 and C1.