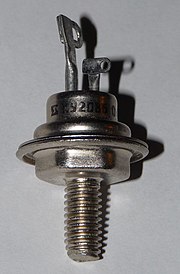 Thyristor is the name for a component in electrical engineering . It is a trunk word from the two terms thyratron and transistor .

A thyristor is a semiconductor component made up of four or more semiconductor layers with alternating doping . Thyristors are switchable components, which means that they are non-conductive in the initial state and can be switched on by a small current at the gate electrode . After switching on, the thyristor remains conductive even without gate current. It is switched off by falling below a minimum current, the so-called holding current.

The thyristor has three pn junctions in the sequence pnpn . Like a diode , it has an anode and a cathode ; compared to the diode, there is also a gate connection.

There are several ignition options:

In practice, the thyristor is used as a controllable diode.

The thyristor can be ignited (switched conductive) by current injection into the third layer (control at the gate). The prerequisite for this is a positive voltage between anode and cathode and a minimum current through the middle barrier layer. A characteristic of the thyristor switch-on process is that the process is supported by positive feedback . In contrast to other power semiconductors , the speed of the switch-on process can not be influenced via the gate. The current density in the third layer is problematic during the ignition process. When the electrons are injected, the layer at the point of entry becomes conductive. Until the entire silicon surface is conductive, the current is concentrated on the already conductive area, in which the entire power loss is converted. The power loss density can exceed the permissible value and lead to local temperature increases above the diffusion temperature or even the melting temperature (1683 K) of the silicon. It is therefore important that the rate of current rise (critical current rate of rise) does not exceed a certain value, which in most cases is ensured by inductance in the load and the lines. If a capacitive load is to be switched, the rate of current rise may have to be limited by additional measures. In the case of strongly inductive loads, on the other hand, the increase in current lags behind the increase in voltage. It can therefore happen that the so-called latching current is not yet reached immediately after the ignition pulse has been extinguished.This is understood as the minimum value of the current that must flow through the thyristor so that it remains conductive when switched on even without gate current. This leads to undefined switching processes, which are also known from AC dimmers ( phase-angle control ) (working with triacs ) , and lamps controlled in this way can often flicker in the lower load range. To avoid this effect, a snubber network is used, which means an RC element (series connection of a resistor and a capacitor, typical values: 470 Ω and 100 nF), which is connected between the anode and cathode of the thyristor section. When igniting, the capacitor discharges through the resistor and the thyristor and thus provides a small current for a short time in order to exceed the latching current. A series-connected choke coil for radio interference suppression is often found in thyristor circuits.

(That is in the off-state offset) deleted is the thyristor, either by falling below the holding current (engl. Holding Current ,) which is generally at shutdown or reversal of the voltage in the load circuit or in a current zero crossing (z. B. in the rectifier) of the load circuit happening , or by reversing the polarity in the reverse direction. The speed of this process is limited by the release time t q , which is necessary for the thyristor to regain its full control and blocking capability after the conduction phase has ended. This is only achieved again when the relevant middle barrier layer has been cleared through recombination of charge carriers . The release time is a component property and is specified in the data sheet. Depending on the type, it can be 10 to 400 µs. When inductive loads are switched off, the release time requires a limitation of the rate of voltage rise; this is also done by the aforementioned snubber network. Otherwise (the inductance still carries the holding current) spontaneous re-ignition ("overhead ignition") can occur. Newer thyristors (“snubberless” types) are able to cope with this voltage increase even without an RC element.

Specially designed variants ( GTO thyristors ) can also be switched to the blocking state by a negative current pulse at the gate. The required current intensity of the negative extinguishing pulse is, however, orders of magnitude higher than that of the ignition pulse. A charged capacitor is frequently connected to the gate connection to provide the erase pulse.

The first thyristors were developed at General Electric (GE) in 1957 after William B. Shockley , Jewell James Ebers and John Lewis Moll did the preliminary work at Bell Laboratories . The component was initially referred to by GE as SCR (from English silicon controlled rectifier , German controlled silicon rectifier ). Westinghouse produced similar components a little later and referred to them as trinistors. The AEG called their components first controllable silicon cell . The term thyristor first caught on in the 1960s, but SCR is still used in English-speaking countries.

The thyristor was the first controllable power semiconductor component for high performance and quickly opened up a wide range of applications. In the meantime, thyristors have been replaced by other power semiconductors in many applications, but still have a large market share due to their high switching capacity and robustness, especially in the field of high-current applications. New types with improved parameters are still being developed, e.g. B. with lower ignition currents, improved switch-off behavior or robustness against steep voltage increases when the holding current is torn off at inductive loads, which otherwise make a relief circuit ( English snubber ) necessary. 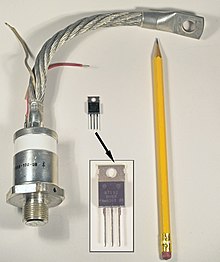 In addition to these desired components, the alternating doping of the n-channel and p-channel field effect transistors in CMOS semiconductor components can result in undesirable, so-called “parasitic thyristors”. If these thyristors are triggered by short voltage peaks at the inputs of a CMOS stage ( latch-up effect ), the CMOS component can be destroyed. 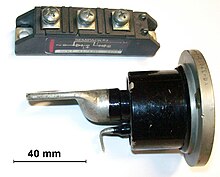 Thyristors in the module housing (top, half bridge) and in the flat bottom housing 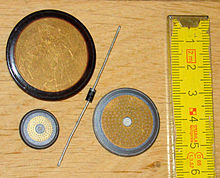 The picture below shows the internal components of thyristors without a housing. The silicon wafers are soldered to tungsten plates, the polished bases of which are pressed onto the heat sink. The upper side is vapor-coated with gold and has spring contact so that the crystal cannot be destroyed by thermal expansion. The ignition contact can be seen in the middle of the SCR discs.

Thyristors or triacs of low power are used in household appliances to control the speed of universal motors (vacuum cleaners, mixers, hand drills). Dimmers for lighting control work in a similar way . At the end of the 1970s, they were also used in the horizontal output stages and power supplies of televisions, later they were replaced by bipolar transistors or MOSFETs .

In connection with a Zener diode , the thyristor is used in clamping circuits . In normal operation, the Zener diode and thyristor block. If the zener voltage of the diode z. B. is exceeded by a defect in a transformer , the thyristor becomes conductive and causes an intentional short circuit, whereby the fuse of the power supply immediately burns out. This prevents more expensive components in the connected device from being destroyed by an output voltage that is too high.

In the power range above 2 kW, thyristors are used in numerous industrial applications. In most cases, circuits for operation with three-phase current are used. Thyristor allow as soft starter cranking of squirrel-cage induction motors with controlled start-up currents and torques. The output voltage of high-current rectifiers, e.g. for electroplating, or of high-voltage rectifiers, e.g. for supplying electrostatic precipitators , can also be regulated with thyristor controllers. The thyristor controller is arranged on the primary side of the transformer, while power diodes are used on the secondary side for rectification. Thyristor switches for alternating current and three-phase current have the same structure as the thyristor controllers. The power control does not take place here via phase control, but via the variation of the pulse-pause ratio . They are therefore only suitable for controlling loads with a large time constant, such as heating elements.

Thyristor rectifiers were used to control the speed of DC motors. But also in many modern frequency converters for the speed-variable operation of three-phase motors, thyristors work in the input rectifier to enable controlled charging of the DC voltage intermediate circuit .

Systems for inductive hardening with working frequencies of 5 to 20 kHz used to be built with frequency thyristors. In this application, thyristors were replaced by IGBTs early on . 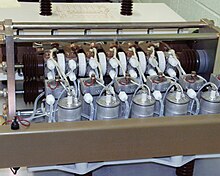 Water-cooled thyristor unit for around 10 kV and 2 kA as a sub-unit in the Nelson River Bipol system . 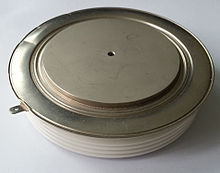 High-power frequency thyristors are still used today in load-commutated inverters in the megawatt range. In the converter motor, a load-controlled inverter works together with a synchronous machine and thus enables the variable-speed operation of turbo compressors. Systems for inductive melting are still implemented with frequency thyristors with high power and working frequencies of up to 1 kHz.

Variable-speed drives with high performance on the three-phase network can also be implemented with direct converters at low speeds . Several thyristor rectifiers are interconnected and controlled in such a way that a three-phase system with frequencies of up to 20 Hz is created on the output side.

Pulse inverters with thyristors are used in electric railways in both traction vehicles and stationary systems. The pulse inverter enables the squirrel cage asynchronous motor to be used in traction vehicles. Together with the power converter on the line side , which also works as a pulse converter, here referred to as a four-quadrant converter, energy can be fed back into the grid when braking. The converters of the first three-phase locomotives series 120 or ICE 1 power cars (the first 40 power cars ; meanwhile, however, have been converted to IGBT ) are still designed with frequency thyristors and quenching circuits, while GTO thyristors were used in later series. In the meantime, thyristors have been largely replaced by IGBTs. Pulse-controlled inverters with GTOs and IGCTs are used in stationary systems to couple the rail network with the national network.

Thyristor rectifiers of high power are used for aluminum and chlorine electrolysis .

In systems of high-voltage direct current , but also in systems for reactive power compensation thyristors are used in power transmission and distribution.