A cathode [ kaˈtoːdə ] (also cathode , from ancient Greek κάθοδος káthodos "return", literally "way down") of a component is an electrode at which electrons are fed to a component. A vacuum (see electron tube ), a gas phase (see gas discharge tube ), a plasma or an electrolyte can be present in the component . According to the definition, reduction reactions can take place at this electrode , e.g. B. positive ions ( cations ) are discharged.

Depending on the electrical polarity between the electrodes, either a positive pole (+) or a negative pole (-) is assigned to a cathode . In the case of voluntary redox reactions , such as when batteries are discharged , the cathode is the positive electrode. In the case of a redox reaction, such as electrolysis , forced by an applied voltage , the cathode is the negatively polarized electrode.

In the case of rechargeable batteries ( accumulators ), the same electrode works either as an anode or a cathode, depending on whether the accumulator is being charged or discharged.

Half cell of a galvanic cell with a cathode made of elemental copper . Dissolved copper sulfate is present in the aqueous phase . i shows the technical current direction

Deposition of elemental copper as a partial reaction in a Daniell element :

Release of gaseous hydrogen as a partial reaction of water electrolysis : 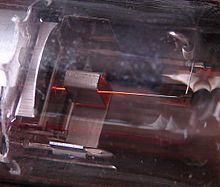 In the electrical engineering , the cathode is an electrode of a cathode ray tube , fluorescent lamp (with the special case of cold cathode lamp ), diode , fuel cell , lead storage battery and so on.

In the case of components where the anode has positive voltage compared to the cathode, electrical energy is converted into another form of energy (heat, chemical energy, ...), e.g. B. a diode, a cathode ray tube or an accumulator that is being charged.

In the case of components in which the anode has negative voltage compared to the cathode, electrical energy is given off to the external electrical circuit at the expense of another form of energy (e.g. chemical energy), e.g. B. in a fuel cell or an accumulator that is being discharged.

Very elaborate cathodes can be found in systems for high-voltage direct current transmission , for example in the form of huge copper rings laid in the sea; also in electroplating plants or also in accumulators (e.g. car batteries) and in cathodic corrosion protection .