As corrosion protection measures are called for avoiding damage caused by corrosion can be caused by metallic components. Since absolute corrosion resistance cannot be achieved, the protective measures taken generally aim to reduce the speed of the corrosive attack to such an extent that damage to the component can be avoided during its service life.

The term corrosion is no longer only used for metallic materials, but also for glass, plastics, building materials, etc. The attacking medium is called a corrosive agent. If the functionality of a component is impaired as a result of a corrosion attack, this is referred to as corrosion damage.

According to DIN EN ISO 8044, a distinction is made between the following types of corrosion:

Scheme drawing for the formation of rust 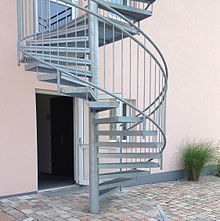 Synthetic resins such as EP or PU , plastics such as PVC and plastic films , oils , lacquer , rubber or hard paraffins are used as coating materials applied in liquid, paste or powder form .

Examples of (inorganic or metallic) coatings are a conversion layer by a phosphating , an anodized layer , a hard anodic oxide film , a chromate or other conversion layers with rather non-metallic character and hot-dip galvanizing , which in turn form a protective passivation layer and, moreover, in case of damage to the substrate as a sacrificial anode to protect .

Large and long pipelines made of steel for water transport are preferably lined with an inner coating of cement mortar to protect against corrosion . The corrosion resistance can be further improved by adding suitable plastics. The main advantages of this type of coating are:

Also, by electroplating , or chemically generated, metallic cover layers of tin , gold , nickel , copper , chromium , zinc or alloy coatings such as nickel-phosphorus ( chemical nickel ) or zinc-nickel bring about a corrosion protection. Also finds galvanizing (a hot-dip process) is widely used. The protective effect of metal layers is based on their property of not corroding themselves (precious metals) or on the barrier effect through the formation of a dense oxide layer on the surface (so-called passive layer), which serves as corrosion protection. Some metals are able to form a surface layer "by themselves" that protects the base material, such as the patina on copper or zinc.

With metallic layers, the protective effect in the event of layer damage depends on the type of layer. Less noble layers protect the workpiece cathodically and act as a sacrificial anode - the layer preferentially dissolves and thus maintains the function of the component for as long as possible. Even smaller defects or damage in the layer therefore initially have no serious effects (so-called remote effect). A classic example is the galvanizing of steel , but also the protection of hydraulic structures such as As ships, locks, sheet piling, boat parts and rails by attaching sacrificial anodes of zinc - aluminum - or magnesium - alloys . More noble layers than the base material protect it anodically, but have the major disadvantage that if the layer is damaged, the less noble base material underneath is dissolved more quickly ( contact corrosion ).

A certain amount of corrosion protection is offered by B. tinplate - here tin is used as a coating material so that food can also be packed with it. However, after some time, if the can is open, tin ions are formed, which are toxic to z. B. Cress work. Therefore, the can should also be painted .

In rust converters , corrosion protection is achieved by removing the original, porous iron oxides and further oxidizing the upper iron layer to form an Fe oxide with a smooth surface that prevents water from being absorbed and thus preventing further rusting. Phosphoric acid or tannin is used for this, mixed with additives. After the treatment, sealing with polymer varnishes is common in order to achieve permanent protection. Products are also offered that are intended to combine both functions.

Another possibility for cathodic corrosion protection - KKS for short - can be achieved by means of external current and external current anodes . In the case of oil pipelines , z. B. at intervals of a few kilometers at a distance of a few hundred meters across the line electrodes sunk into the ground, which are fed with a counter voltage. The other pole is on the pipeline, so that this voltage gradient precisely compensates for the galvanic element made up of the ground and metal line, which is in the range of a few volts . Since this depends on the chemical composition of the soil, it must be examined and the counter-voltage fed in must be adapted to the local conditions.

In bridge construction , especially on motorway bridges, the KKS is carried out using an impressed current anode. For this purpose, an anode grid made of coated titanium is applied to the surface to be protected and about 2 cm to 3 cm is injected with shotcrete . The shotcrete serves as an electrolyte . The current is fed into the reinforcement via a rectifier, thus providing cathodic protection. The measure is continuously checked with an automatic monitoring system.

Iron is more positive than zinc in the electrochemical series , ie zinc is less noble than iron and represents the anode in the galvanic element, and iron is the cathode. Iron, as a noble metal, is cathodically protected until the zinc has corroded away.

The aim of active corrosion protection without external current is to protect a metal from rust that often comes into contact with water, for example. To do this, one uses a less noble substance that is sacrificed for the nobler metal. For corrosion protection using a sacrificial anode , anodes made of different materials are used depending on the application. The sacrificial anode must be conductively connected to the metal to be protected in order to achieve protection. A current of a few milliamps flows in the resulting circuit, which is fed from the redox reaction of the oxidation of this sacrificial anode .

In the case of iron and magnesium, the reaction proceeds as follows: As soon as magnesium or iron comes into contact with the water, it is oxidized to Mg 2+ or Fe 2+ . According to the electrochemical series, there is a potential difference between magnesium and iron of 1.9 V (standard potentials at 25 ° C; 101.3 kPa; pH = 0; ion activities = 1). Since magnesium, with a potential difference to hydrogen of –2.362 V, has a significantly more negative potential than iron with –0.41 V, magnesium is oxidized at the anode and the iron is reduced by accepting electrons. This reaction takes place very slowly, but can be accelerated by changing conditions. The incident on the water electron now divide this into H 2 and 2OH - on. The iron does not change because it can take up the electrons given off by the magnesium. The magnesium, on the other hand, gradually dissolves and must be renewed after it has been completely broken down.

In order to protect ships made of steel from corrosion by the sea water, magnesium anodes are attached to the outside of the hull at regular intervals.

A simple attempt at corrosion protection: