This article deals with the corrosion of ferrous materials. For other meanings, see rust (disambiguation) .

Course of corrosion on a painted surface 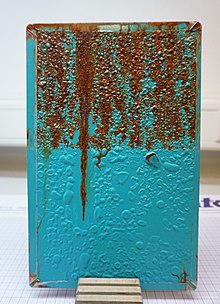 Rust on a sheet that was in the salt spray tester. On the upper half without primer, on the lower half primer + top coat

When rust is defined as the corrosion product composed of iron or steel by oxidation with oxygen in the presence of water is formed. Rust is porous and does not protect against further decomposition, unlike the oxide layer of other metallic materials such as chrome, aluminum or zinc or Corten steel that only rusts on the surface . On the basis of these properties, the metals are divided into the groups ferrous metals (rust) and non-ferrous metals (do not rust). The weathering of ferrous materials in the air and water to form rust causes damage running into billions worldwide every year.

From a chemical point of view, rust is generally made up of iron (II) oxide , iron (III) oxide and crystal water . Sum formula :

Rust is thus a hydrous oxide of iron, a chemical compound that belongs to the oxides and also contains water and hydroxide ions (oxide hydrate). It is created by the oxidation of iron without the need for higher temperatures. Rust thus resembles the compound manganese dioxide ( manganese dioxide containing water ), which is also to be regarded as an oxide hydrate of a transition metal.

Rust forms loose structures of low strength . The oxidation causes an increase in mass and volume. The latter leads to tension and flaking of the rust layer (see illustrations).

To protect against corrosion, ferrous materials are coated with protective layers, provided with sacrificial anodes , or also subsequently derusted with phosphoric acid or citric acid and then protected again .

Reinforcing steels do not rust if they are well encapsulated in the concrete , since the alkaline environment (pH> 12) in the concrete forms a passive layer on the surface of the steel that protects against corrosion. As a result of the carbonation process , the pH value of the concrete can drop so far that there is no longer a protective passive layer on the steel. If water and air gain access to the steel, it can rust. As a result of the increase in volume of the rust, the concrete surface bursts in the area of ​​the rusting steel and the decay is accelerated because water and air have even better access.

Rust on a tractor

on the metal surface.

In the case of acid corrosion ( hydrogen corrosion ), the protons (hydrogen ions) of the acid withdraw electrons from the metal: Iron reacts with hydrogen ions in the water (at A) to form iron (II) cations:

The hydrogen ions (oxidizing agent) react to hydrogen gas ( redox reaction ) because they absorb the electrons of the metal (reduction of the oxidizing agent). The reaction scheme of the overall reaction is thus:

Schematic representation of the rusting of iron (gray) in the presence of water (blue) and oxygen (white). See text for an explanation of the numbers.

In the case of oxygen corrosion (weathering of iron to rust), oxygen acts as an oxidizing agent: it absorbs electrons.

In the schematic representation of the grating (see picture) there is a drop of water (blue) on an iron surface (gray), surrounded by air (white). According to the voltage series of the elements , the positively charged iron ions diffuse into the aqueous environment, the electrons remain in the metal and charge it negatively, see ① in the schematic drawing.

The negative charge of the metal and the boundary layer of positively charged iron ions above the iron surface generally prevent rapid reaction with protons: oxygen and air-free water do not attack the iron metal.

But if oxygen is present, it takes over the transport of the electrons. It diffuses from the outside into the water droplets (see diagram). The difference in concentration in the water drop now creates a potential difference between ② and ③. The anodic area ② and the cathodic area ③ form a galvanic cell with the water as electrolyte , a redox reaction takes place.

The electrons react with water and oxygen to form hydroxide ions, see ③ in the diagram:

Iron (II) hydroxide is olive green to gray green and is converted to iron III ions in the presence of water and air. Together with the hydroxide ions, rust-brown iron (III) hydroxide is formed in this second redox reaction :

In simplified terms, the overall reaction scheme is thus:

Due to the release of water, sparingly soluble iron (III) oxide hydroxide is formed, which is deposited on the iron surface at ⑤:

When iron comes into contact with another metal, a local element is created at the contact point , which leads to corrosion of the less noble metal. The rusting process is also accelerated by the presence of salts, as these increase the conductivity of the water. The migration of the ions in the water is important for the corrosion process, otherwise the circuit would be interrupted and the corrosion would come to a standstill very quickly (see salt bridge in a normal electrochemical cell).

Even with other metals such as zinc , chromium , aluminum or nickel , some of which are less noble than iron, only the top atomic layers oxidize to a barely visible oxide layer, which shields the metal below from further reaction with oxygen (see also passivation ).

At temperatures above 180 ° C, protective layers of magnetite (Fe 3 O 4 ) form on the surfaces of ferrous materials when exposed to high-temperature water vapor . It is created by the reaction of metallic iron with water molecules to form hydrogen. In the case of pipes in high-pressure vessels with very high local heat loads, this reaction can take place more intensely and is sometimes one of the causes of pipe ruptures. High pH values ​​of the water, especially in the presence of alkali ions, additionally accelerate this reaction. 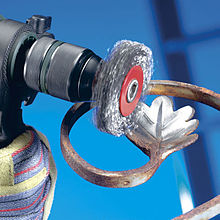 Heavily rusted metals can be freed of rust by brushing or grinding. One of the most effective methods of derusting is blasting with sand or similar materials that are free of silica. This method is mainly used in technology before painting. If the sandblasting method is not sufficient, the pneumatic needle scaler can also be used. The complete removal of rust down to the bare metal is one of the prerequisites for a corrosion-resistant coating to be achieved.

Light rust can also be washed off with a weak acid . Dilute phosphoric acid , for example, is suitable . So that the acid does not attack the metal, it must then be rinsed off with plenty of water. The metal must be dried thoroughly and protected from further corrosion. Phosphoric acid also acts as a rust converter and is used in various mixtures for repairing cars , for example .

With all these methods of derusting, the rust is removed and the rusty material is lost.

Three strategies for corrosion protection can be derived from the model :

Keep away from oxygen

However, these reactions can also be prevented by various other protective measures. One example of this is passivation : the coating with such less noble metals that form a stable oxide layer. A metal can also be provided with another metal as a protective layer against oxidation by electroplating , galvanizing or chrome-plating . Further protective coatings are diffusion-proof and pore-free paints and coatings with plastics and spun concrete.

Keeping away from moisture

Since water acts as an electrolyte in the reaction to rust development, keeping it dry is a good counter-strategy. For example, there is practically no rust damage to cars in areas with low humidity .

Pipeline pipes and the sheet steel wraps around lead cables (for telephone and electricity until about 1970) were covered with bitumen- filled jute mats or strips to prevent the soil from wetting with water. Even today, the areas that are particularly at risk of corrosion, where traffic light or lamp masts or grounding poles penetrate the pavement, are provided with a bituminous, greasy or concrete cover.

Another possibility are protective layers made of grease , paint , chrome or metal coatings (metallic coatings) that shield the iron from the environment ( hot-dip galvanizing , tinplate ). As soon as this protective layer is destroyed, the rusting process begins, see pictures on the left and right.

Stainless steel is an iron alloy with a chromium content of more than 12% and is protected from oxidation by the chromium oxide layer .

Reduction of the potential difference in local elements

Example 1: Hot-dip galvanizing provides long-term protection for iron against rust. If the coating is damaged, zinc and iron form a local element (similar to a battery) when exposed to water. Zinc, the less noble metal, corrodes and protects iron from oxidation. In most zinc dust paints (“zinc spray”), however, the zinc cannot have a galvanic effect, as it is isolated from the binding agent. Only zinc dust paints with an electrically conductive binder or zinc dust paints based on epoxy resin with a suitable pigment volume concentration ( PVC ), at which the zinc particles touch, provide good protection against corrosion.

Example 2: Iron pipes are electrically connected to a so-called sacrificial anode made of a less noble metal. As in the first example, iron is protected at the expense of the sacrificial anode, provided that both are in contact via an electrolyte , e.g. moist soil.

Example 3: Instead of a sacrificial anode, an electrically conductive electrode (e.g. graphite) also protects if it is kept at a positive potential relative to the iron via an external DC voltage source. This is called cathodic corrosion protection , which is used in pipelines and in bridge construction .