The impedance ( lat. Impedire " hemmen ", "hinder"), also alternating current resistance , is an electrical resistance in alternating current technology . In the case of a two-pole network element, it indicates the ratio of electrical voltage to current strength . The term is used in particular when there is a phase shift between the two quantities , which means that the ratio of resistance differs in DC applications.

The impedance is a physical quantity used to describe it

Representation of the impedance as a pointer in the complex plane

The impedance is advantageously specified as a complex-valued function of the frequency . It is the summary of two statements:

Both properties are mathematically summarized by representing the impedance as a complex quantity:

, where is the imaginary unit .

The amount of the complex impedance is the impedance . The time shift is given by the phase shift angle, which can assume values ​​between −90 ° and + 90 °. In a different spelling is

The real part is the part of the impedance at which no phase shift occurs; this is always positive. The imaginary part is the part in which a phase shift of 90 ° occurs; this can be positive or negative, - positive when the current lags the voltage, - negative when the voltage lags the current. The phase-shifting component is frequency-dependent, the non-phase-shifting component can either be frequency-dependent or independent; see under keyword electrical resistance .

The reciprocal of the impedance is the admittance (complex conductance).

The choice of terms in this article follows the standardization which defines:

In the technical literature, the term impedance is not always used consistently and is used synonymously for both the complex size and its amount .

In the case of the effective values, the normalizing factors are reduced.

Impedance curve of a loudspeaker as a function of frequency

The impedance is important for the adaptation of high frequency lines, but also for the wave propagation in free space. If, for example, the input impedance of a device does not match the impedance of the line, reflections occur , which reduces the power transmission and can lead to resonance phenomena and thus to a non-linear frequency response .

Electrodynamic loudspeakers are operated with alternating current, which is why the inductive resistance of the built-in voice coil causes a phase shift between current and voltage that is frequency-dependent. For this reason, we do not speak of resistance, but of the impedance of the loudspeaker.

If impulses are transmitted through cables , an ohmic resistance of the cable has little relation to the impedance of the cable. Here it is almost always important to avoid reflections of the impulses at the opposite end of the cable. The terminating resistor required for this is practically real for lossless lines, i.e. an ohmic resistor. This value is a characteristic impedance and characteristic impedance referred to the cable. Depending on the line losses at low frequencies, this can become complex-valued and highly frequency-dependent. It can be determined using time domain reflectometry .

In biology , the impedance can be used by means of electric cell substrate impedance sensing to detect changes in shape in animal cells . In the case of in vitro cell cultures, the electrical impedance at a fixed frequency is given as the TEER value .

The impedance has the unit ohm with the symbol Ω. In the two representations as a complex quantity , its components and their meaning can be read:

In a consumer with an inductance , this has a positive (inductive) reactance ; the voltage leads the current. It stands for the angular frequency of the oscillation. In a consumer with a capacitance , however, this has a negative (capacitive) reactance ; the voltage lags the current. (For the sign convention used, see note under reactance , for derivation see under Complex AC Calculation ). 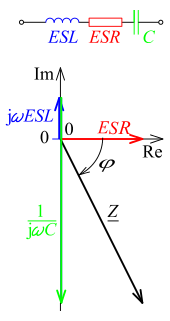 Equivalent circuit diagram of a capacitor at a higher frequency (above); Representation of the associated impedance as a vector diagram in the complex plane (below)

The vector diagram for shows how the component behaves,

The apparent resistance is provided by the Pythagorean addition of the active and reactive resistances:

In the case of technical devices, often only this amount of impedance, i.e. the apparent resistance, is specified. In a general network of ohmic resistances, inductances and capacitances, however, this is frequency-dependent.

Loudspeakers have highly frequency-dependent impedances - however, a nominal value (e.g. 4 Ω or 8 Ω) is specified. According to the international standard (IEC 60268), the lowest impedance occurring in the frequency range must not fall below this nominal value by more than 20%. Any higher impedances at other frequencies are permitted.

In antennas , the input impedance is also called base impedance, it should at the frequency for which the antenna is intended to be real and match the impedance of the cable (eg., 60 Ω or 240 Ω).

When transmitting alternating voltage, waves are reflected when the impedance of a line or of the transmission medium changes. In principle, this is not tied to the number of wavelengths on a line, but with short transmission paths in relation to the wavelength, the change in the impedance of the transmission medium has hardly any effect. A part of the incoming wave is reflected at the place where the impedance changes. The magnitude of the reflection factor is between 0 and 1. If its magnitude is 1, the entire wave is reflected and if = 0 (that means ) there is no reflection, in this case impedance matching is present. This is often desirable with high-frequency lines and electromagnetic wave propagation.