As a two-terminal network (including one-port or English. One Port Devices called) is known in the electrical engineering generally an electrical component or an electrical circuit with two "connections" (terminals). The extension is the quadrupole (two-port). 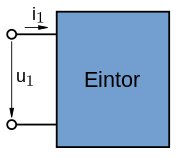 Symbol of a one-gate (two-pole)

According to the clamping behavior with sinusoidal alternating voltage, two-pole terminals are divided into three categories:

There are mixed forms from the categories mentioned above: resistive-inductive, resistive-capacitive. An example of a resistive-inductive two-pole is an electric motor. An oscillating circuit can show all three behaviors depending on the frequency. A resonant circuit is often normalized by its resonance curve via the detuning , instead of being represented by a UI diagram.

In addition to these three categories, other properties of a two-pole can be determined:

If bipoles consist of purely passive elements, these are usually connected to one another by combinations of parallel connections and series connections and can easily be combined. In rare cases, however, it happens that three elements form a so-called star or triangle and prevent a direct combination. A star-delta transformation can, however, resolve such a problem area, which enables further summarization. If more than three switching elements form one of these problem areas, one speaks of stars and polygons and consequently the generalized star-polygon transformation . 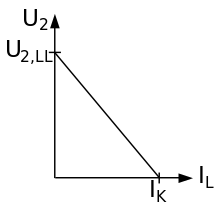 UI characteristic of the output

An equivalent circuit for an active two-terminal network consists of a backup power source or backup power source and an internal resistance . In the picture on the right, a simple voltage divider is shown as an example of a simple active two-pole circuit consisting of a voltage source U and two resistors R 1 , R 2 connected in series . The output voltage U 2 falls over the parallel circuit of R 2 and any connected load resistor R L from. The value of the equivalent voltage source shown on the right in the next picture, the so-called open circuit voltage , can either be measured at the output in the unloaded state without R L ( ) with a voltmeter or determined using the voltage divider rule. For the example, the value of the equivalent voltage source results as follows:

With both values, the internal resistance of the equivalent circuit results as:

The output power is determined by:

The total output is:

The efficiency is calculated by:

The two-pole theory deals with the theoretical consideration and calculation of two-poles. The clamping behavior is described using the relationship between current and voltage , which can be frequency-dependent . If this relationship is entered in a two-dimensional diagram, different graphs are created depending on the component. This results characteristics , characteristic surfaces or individual points. However, a current-voltage diagram cannot be drawn for all elements.