The Chamissoplatz (named after Adelbert von Chamisso ) is a square in the Berlin district of Kreuzberg ( Friedrichshain-Kreuzberg district ) and is located between Willibald-Alexis- and Arndtstraße. The residential area was laid out in the second half of the 19th century and built on with the then popular Wilhelminian style houses.

The square is located near the former Tempelhof Airport in the south and Bergmannstrasse in the north. This area of ​​Kreuzberg is also called "Chamissokiez" by the residents. The Kiez is a preferred place for artists and students .

In character, the inner part of Chamissoplatz is a children's playground . A place on its east side all year Saturdays 9 15:00 farmer's market with organic products from the region Berlin-Brandenburg held. Among other things, the Marienhöhe farm , which has been operating biodynamically since 1928 and is the oldest organic farm in Germany, offers products .

Due to the uniform development, the square is a frequent destination for sightseeing tours. There are several restaurants at Chamissoplatz. Sometimes it is the location of filming when it comes to using an old Berlin backdrop. Among other things, the film Berlin Chamissoplatz by Rudolf Thome was shot here in 1980 . The entire building ensemble on Chamissoplatz and the adjacent streets are under monument protection . 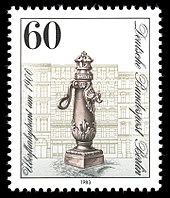 Handle pump on Chamissoplatz around 1900, postage stamp from 1983

The area around Chamissoplatz emerged during the rapid urban growth of the Wilhelminian era and was developed as a supplement to the Hobrecht Plan from 1877. The Schmuckplatz was created according to a design by the Berlin gardening director Hermann Mächtig from 1887. It was named after Adelbert von Chamisso on April 24, 1890. At that time, the development on the edge was already completed. A distinction was initially made between Chamissoplatz and Am Chamissoplatz , which denoted the western and eastern borders. The area was initially the residential area of ​​the common people like teachers, civil servants, craftsmen and workers. By means of backyards there was a dense development with little comfort, between 15 and 20 families are given per house. The surrounding streets were paved with cobblestones . The gas lanterns that were first erected are still there, although the Senate decides that they will disappear all over Berlin.

After squatting in the 1980s, the buildings in the entire neighborhood were extensively renovated . The significantly improved living conditions and further privatization of entire buildings have led and still lead to rent explosions and a change of residents towards the well-heeled . For the area around Chamissoplatz, the district office issued a conservation ordinance in 2005, which, among other things , is intended to control the conversion of rental apartments into owner-occupied apartments .