The Berlin Senate is a constitutional body and exercises as state government of the country Berlin the executive power at the state level from. The Senate consists of the Governing Mayor at the top and up to ten Senators .

From 1808 Berlin was ruled by a magistrate headed by a lord mayor . In 1920 this was comprehensively regulated with the Greater Berlin Act.

Since the German Municipal Code came into force in 1935, the Berlin administration was headed by a city president during the Nazi era .

From the end of the war to the division of Germany 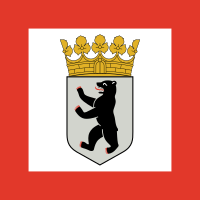 Standard of the Senate of Berlin

The first magistrate after the Second World War was installed on May 19, 1945 by the Soviet military administration for Greater Berlin and initially continued after the four-power status came into force . On October 20, 1946, a general assembly of Berlin city councils was elected. The Reuter magistrate, elected by the city assembly on June 24, 1947, was not recognized by the Allied command .

As a result of the currency reform and the Berlin blockade in 1948, the joint city government of Greater Berlin came to an end. In West Berlin a new city ​​council was elected on December 5, 1948 , and in East Berlin one was installed by the Soviet occupying power. The advancing division of Germany and the establishment of the Federal Republic of Germany in 1949 manifested the special status of West Berlin and its state government.

Division of the city and reunification

The division of Berlin

After the entry into force of the Constitution of Berlin in West Berlin in October 1950, was changed to " Berlin House of Representatives renamed" city council re-elected, which, due to the position of West Berlin by West German understanding as a country of the Federal Republic of Germany the position of a regional parliament took. In place of the term magistrate who stepped on the model Hanseatic - city-states of the Senate and the place of the mayor of the mayor . Both new names were intended to underline the character of Berlin as a state and thus set the city apart from a “simple commune ”.

The first freely elected state parliament of East Berlin, the city council, elected the magistrate of Berlin on May 30, 1990 under its chairman Christine Bergmann , the first democratically elected state government for the eastern part of Berlin in a parliamentary individual vote of the candidate magistrate members, namely the mayor Tino Schwierzina and his city councilors. The new magistrate was elected from the parliamentary groups of the SPD and CDU . The Senate, elected a short time before, consisted of a red-green coalition .

The offices of the governing mayor and the lord mayor were equal for this special status until reunification , as were the senators and city councilors. For the latter, the Senators' Act applied in the financial amount of the salary group B11 customary in the country . The Senate and Magistrate proposals were signed jointly by the responsible senator and the city council before the resolution was passed and submitted to the government meetings.

The task of the “Magisenat” was to normalize and harmonize the political structures that had developed divergently for decades in preparation for reunification as quickly as possible. The basis was state administrations and institutions of both parts of Berlin had to be united.

As an example, the municipal administration for finance under its city councilor Bernd Fritzsche is shown here. For the eastern part of Berlin, the first state budget after 1945 had to be democratically drawn up, resolved and put into effect as quickly as possible in 1990. This was the first state budget after the Second World War, which was drawn up in an exemplary manner without new borrowing, with budget savings in the millions. This remained a novelty until the state budget of 2008 under the then Finance Senator Thilo Sarrazin , which was also drafted without new debt. City Councilor for Finance Fritzsche had to set up a new tax administration for the eastern part of Berlin in coordination with the regional finance department. Seven tax offices were set up. Fritzsche contributed to the fact that 15 new housing companies could be established as GmbH from the old district municipal housing administrations , which received management. Furthermore, City Councilor Fritzsche arranged for the Berlin state assets to be recorded and secured outside the city limits in the Brandenburg area (former Berlin city assets ). Fritzsche supervised the Landesbank Berlin under the chairmanship of Hubertus Moser for the realization of the monetary union, i.e. the rapid introduction of the D-Mark in the GDR and East Berlin.

The city council continued to supervise the German class lottery Berlin , whose lottery offer was extended to the eastern part of Berlin by its decision. Fritzsche founded the “State Office for the Regulation of Open Property Issues” in order to quickly issue the investment decision taking into account existing claimants and new investors and, on the other hand, to initiate the compensation scheme so that construction and jobs could be created quickly in Berlin. The parallel colleague Finance Senator Norbert Meisner (SPD) acted cooperatively and helpful in all matters . These great tasks under time stress applied equally to all municipal and senate administrations as well as to their city councils and senators.

Its own municipal administration as an institution was finally dissolved by the city council for reunification. Some of the workforce went to the tax offices , the Senate Department for Finance, the State Audit Office of Berlin and the newly established state ministries of the eastern states. The title of "City Councilor in the Magistrate" expired on reunification. His area of ​​responsibility was taken over by the senators of the former western half, who were now all of Berlin's senators. After reunification in the newly elected state government under the governing mayor Eberhard Diepgen (CDU / SPD coalition), the colleague Finance Senator Elmar Pieroth (CDU) took over the office of the City Councilor for Finance in the magistrate .

Until the constitutional amendment came into force on July 6, 2006, the governing mayor, unlike the Federal Chancellor and the other Prime Ministers, had no authority to issue guidelines . Rather, he had to submit his political ideas to the House of Representatives and have them confirmed by them. Up until then, the governing mayor did not have the authority to decide the responsibilities of the senate members and to appoint the senators.

Both the departmental responsibilities and the staffing of the departments were decided by the House of Representatives on the proposal of the Governing Mayor. The formation of a government was thus only completed with the election of the last proposed Senate member and the Governing Mayor only took office when the House of Representatives had confirmed all of its members. Conversely, the governing mayor could not dismiss a senator, a senator could only lose his office if he resigned or was voted out by parliament. Correspondingly, votes of no confidence in individual senators or parts of the Senate were also permitted, as happened most recently when Eberhard Diepgen was voted out. However, these peculiarities were abolished with the above-mentioned constitutional amendment by the House of Representatives, so that the Governing Mayor has similar powers to the other Prime Ministers. He now has the authority to issue guidelines and appoint the mayors and the other senators.

The Senate usually meets weekly in the Senate meeting room of the Berlin City Hall .

The legal relationships of the Senate members are regulated in the Senators Act.

The current governing mayor since 2014 has been the SPD politician Michael Müller , who heads a coalition of the SPD , Die Linke and Greens , which was formed as a result of the election of the House of Representatives on September 18, 2016 and began work on December 8, 2016. In addition to Müller, the incumbent Senate includes four senators from the SPD, three from the Left and three from the Greens.

Senate administrations ( = ministries ) of the State of Berlin

Senate Chancellery of the Governing Mayor