The real power is the electrical power that is available for conversion into other powers (e.g. mechanical, thermal or chemical). It must be distinguished from the reactive power that cannot be used for this conversion.

With variable values and the real power is the equivalent of the instantaneous power :

For periodic voltages and currents, averaging over a period with the period duration:

The electrical power supply network or three-phase alternating current network is an important application . Only this is dealt with here. The voltage has a sinusoidal curve over time; Voltage and current are alternating quantities with the same fundamental frequency . In this case there are stipulations in DIN 40108 and DIN 40110 that must be observed for this article. 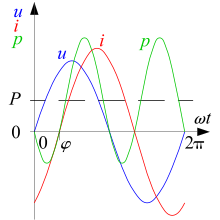 Voltage, current and power over time

The sinusoidal course of the current only occurs if there are only linear consumers in the network. With ohmic loads, voltage and current are in phase. When capacitive or inductive loads occur, there is also a shift in the phase angle between the course of current and voltage. With the effective values of voltage and current , the amplitudes and  , the phase shift angle and the angular frequency is

By applying the trigonometric relationship

and with the use of the rms values

This results in the sinusoidal curve

The component of the current that is decisive for the active power is called the active current .

The conventions on counting directions of the voltages and currents by means of generator and consumer arrows mean that the active power is positive for the flow of energy from the generator to the consumer. The picture of the time course shown above also shows negative values ​​of ; then energy is fed back. The real power is thereby smaller than the apparent power; but it remains positive.

In networks with several sources and loads, the direction of the energy flow between network sections cannot only reverse for a fraction of a period. In terms of power, this is described by reversing the sign of the real power, so that values can also make sense.

If the voltage is sinusoidal but the current is not, the equation remains valid with the restriction that and are parameters of the fundamental oscillation of the current. Harmonics are not included.

Measurements in the energy supply network

A power meter has a current path and a voltage path . It multiplies instantaneous values ​​of voltage and current strength, averages over the instantaneous values ​​of the product and is therefore an active power meter according to the definition of active power. The electromechanical measuring mechanism suitable for this has been replaced by electronic measuring transducers .

Every measuring device has a measuring range that must not be exceeded because otherwise no error limit is guaranteed. In addition, the power meter includes nominal values of voltage and current which, according to the manufacturer's instructions, may only be exceeded to a small extent, otherwise the device will be damaged. This type of overload can definitely occur without exceeding the measuring range!

For the measurement with the correct sign, it is important to ensure that the paths are correctly connected, which are specified by correct circuit diagrams. As a rule , within this article, in accordance with DIN 43807, the following is consistently observed in the circuit diagrams:

(Some voltage arrows are not shown in the circuit diagrams; how they should indicate is nevertheless clear according to the system.)

If this results in a negative measured value, but no negative value can be output, a deliberate reversal of the direction on the voltage path (or current path) helps.

The terminals on the input side of laboratory devices are often marked with an asterisk; Devices for permanent installation are numbered according to DIN 43807; See picture for examples.

Every power meter has its own consumption

With the real measuring device, a distinction must be made between the active power of the producer and the consumer.

There are two ways to connect the power meter, see the corresponding picture. However, none of the circuits records the active power of the producer or consumer, but is measured

In the upper circuit, which is preferably used, the costs of the energy consumption of the measuring device are borne

The most comprehensive case is the four-wire circuit with a neutral conductor and three outer conductors, as is common in the low-voltage network with = 230 V or = 400 V, in connection with any load. Arbitrary means here: Currents with different amplitudes and different phase shifts with respect to the respective reference voltage can flow in the three outer conductors. Then

This can be measured with three power meters or a combination device.

Voltage indicator in the three-phase network 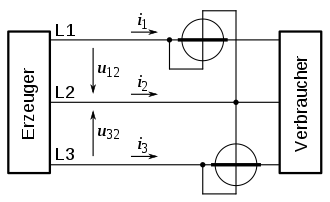 where the last summand is zero, which means that it vanishes. In a three-wire circuit with any load, two power meters are sufficient if they are operated in an Aron circuit according to the next equation.

where = angle between and

and = angle between and 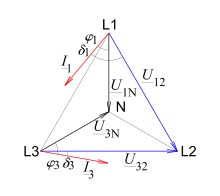 Voltages, currents and angles for the Aron circuit

With symmetrical loading, it is sufficient to use only one power meter for the power consumption through one of the outer conductors. The total output is three times that.

In a three-wire circuit, the neutral conductor potential must be artificially created using a star point as shown in the picture with two resistors that are just as large as the resistance of the voltage path in the power meter.