An arc is created by impact ionization when the electrical potential difference (= voltage ) and current density are sufficiently high . The gas discharge forms a plasma in which the particles ( atoms or molecules ) are at least partially ionized. The free charge carriers cause the gas to become electrically conductive. Most plasmas are quasi neutral, so the number of positively charged ions and electrons is identical. Since the ions are much slower than the much lighter electrons, the electrons are often almost exclusively relevant for the transport of electricity.

In the electric power industry during switching operations occurring arcs are as switching arc called. Unwanted arcs, which often lead to damage or accidents, are known as arcing faults . 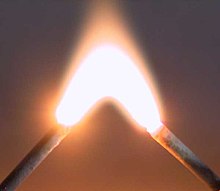 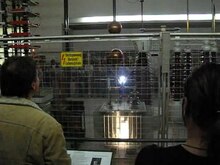 Sir Humphry Davy discovered the short pulse arc in 1800. In 1801 he described the phenomenon in an article published in the Journal of Natural Philosophy, Chemistry and the Arts by William Nicholson (chemist) . As far as we know today, Davys described a spark rather than an arc. In the same year Davy publicly demonstrated the effect in front of the Royal Society by transmitting electrical current through two touching carbon rods and then pulling them apart a little. The demonstration created a “weak” arc between points of charcoal that cannot be easily distinguished from a persistent spark. The company subscribed to a more powerful 1,000-plate battery and saw a large-scale arc demonstration in 1808. The name of the arch is ascribed to him. He called it an arc because it takes the shape of an upward arc when the distance between the electrodes is not small. This is due to the buoyancy on the hot gas.

The first continuous arc was discovered independently in 1802 and described in 1803 by Vasily Vladimirovich Petrow , a Russian scientist who experimented with a voltaic column of 4,200 disks, as a “special liquid with electrical properties”. 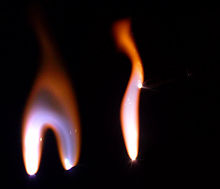 Arc at an alternating voltage of 4 kV and a current of 4 A.

Characteristic of the arc are:

With copper cables, arcs require a minimum voltage of around 12 V and a minimum current of around 0.4 A. In addition to high-frequency waves, they also typically emit intense infrared , visible and ultraviolet radiation .

A voltage of approximately 30 volts is required to maintain this.

Depending on the operating parameters, various processes can be largely responsible for the emission of electrons from the cathode material. An important characteristic is the work function , in order for electrons can leave the solids that are made. In the case of arcs, this is reduced by the existing external field ( Schottky effect or also Schottky reduction). Other relevant processes in electron emission can be the following:

In an electric arc, the plasma is heated up by collisions between the electrons accelerated in the electric field and the heavy particles. The heat is transported to the outside through heat conduction . In addition, emission and absorption of radiation must be taken into account in the power balance. The current account is:

Taking into account the speed of a volume element, the change in enthalpy can be written as:

If you now consider a vertically arranged, stationary, cylindrical arc, then the power balance can be represented more simply. If the flow (in this case the upward movement of a volume element) and the radiation terms are neglected, a power balance is obtained that describes the heating and the rotationally symmetrical heat conduction to the outside:

The temperature profile of the arc depends on the gas used. Molecular gases are dissociated in the arc . In the radial areas in which the dissociation of the molecules increases sharply, the thermal conductivity of the gas is very high and accordingly the temperature gradient is steeper than when using single-atom noble gases . Furthermore, segregation effects (ambipolar diffusion, cataphoresis ) can also occur.

Arcs were first used in lighting technology: arc lamps are the oldest electrical light sources. Davy probably made his first observations in this regard as early as 1802, but published them only later (1812). The arcs were first operated openly in air. There were graphite electrodes used, which burned down relatively quickly.

In high- pressure mercury lamps , argon with a pressure of a few millibars and mercury are used. The lamp ignites with a high voltage pulse and first forms a glow discharge . As the temperature rises, the mercury evaporates, the pressure increases according to the mercury vapor pressure and the discharge changes into an arc discharge. The strong mercury lines dominate the spectrum of the arc.

The xenon short-arc lamp is used in cinema projectors and powerful headlights. Xenon has many optical transitions in the visible spectrum. In connection with high discharge pressures, a strong line broadening is achieved, so that together with the continuum emission of the free electrons, a very continuous spectrum similar to daylight is emitted. The radiation source has a small spatial extent and can therefore be easily collimated with reflectors and lenses .

In addition, different variants of arcs have been established as radiation standards for certain wavelength ranges.

All kinds of arcs are used as a heat source in arc welding, as well as in fiber optic splicing .

An important application is the electric arc furnace for making steel in electric steelworks .

Before the invention of the much more efficient Ostwald process (from 1908), nitric acid was produced through the production of nitrogen oxides by burning air in an electric arc ( Birkeland-Eyde process ).

Another application is the production of thin metallic layers by means of arc evaporation (Arc- PVD ). Here, by means of the kinetic energy of the electrons of the arc, atoms or molecules are released from a solid material (target) and deposited on a substrate. This process is used, among other things, for wear- reducing titanium nitride coatings on cutting tools .

The classic application of the arc is in spectral analysis for the determination of main and trace components, mainly of solids. The material to be analyzed is vaporized in an electric arc, with the corresponding spectral lines being excited. The determination of the chemical elements via their emitted lines and the determination of their proportion in the sample by means of the intensity of the emission takes place in an optical emission spectrometer (OES). Direct current arcs with carbon or graphite electrodes are mainly used.

Arc engines use an arc to strongly heat a thrust gas and thereby accelerate it from a nozzle at high speed (> 4 km / s). Arc engines are used as engines on satellites to carry out orbit maintenance and orbit change maneuvers. The thrust that can be generated is significantly lower than with chemical combustion engines, but the specific impulse is significantly better.

The US company Startech operates a pilot plant in Bristol , Connecticut , for the plasma gasification of waste by means of electric arcs. Two electrodes, which are under high voltage, protrude into the interior of the reaction vessel. The high voltage transforms the air in between into electrically conductive plasma. Up to 17,000 degrees Celsius are reached, and there are still 1,700 degrees on the walls of the chamber. The molecules of the substances introduced break down into their atoms: the inorganic components of the waste melt and collect at the bottom of the reactor. The organic substances (e.g. plastics), on the other hand, evaporate into gas. In addition to hydrogen, it mainly contains carbon monoxide.

The problem with the process is the exorbitantly high energy consumption. In the near future it should only be economical for hazardous waste disposal.

This is a process for producing ethyne from coal.

The process was developed in 1980 as a joint project between Hüls AG ( Marl Chemical Park ) and the DMT company for the production of acetylene. Before the reaction, the coal must be ground very finely (particle size: 100 μm). At very high temperatures of 1000–2000 K in the arc plasma (cathode made of tungsten doped with ThO 2 , anode made of copper), a mixture of hydrogen and carbon particles is caused to react with short contact times (a few ms); quenching with water produces ethine. The coal throughput of the pilot plant was about 350-500 kg / h with a coal conversion of 50%, an acetylene yield of 20/100 kg coal, a current of 1000 A, a voltage of 1250 V. In addition to acetylene (weight 25 , 0%) still have a considerable proportion of carbon monoxide (weight 19.9%) and hydrogen (weight 33.6%).

The process may be of interest for the production of hydrocarbon compounds if cheap coal and electricity are available in some regions of the world.