A glow discharge is a gas discharge that occurs independently between two cold electrodes connected to a DC or AC voltage source at low gas pressure. The color of the glowing glow depends on the gas. The noble gas neon , which gives the color orange-red, is often used in indicator lamps .

Glow discharge in a glow lamp

The light emissions resulting from the discharge are used in fluorescent tubes and glow lamps for lighting or display.

In vacuum technology , a glow discharge is used to clean surfaces to be vaporized. For this purpose, a vacuum of 10 −2 to 10 −3  mbar is set in the recipient and a glow discharge is built up between a ring electrode and ground using a controllable high voltage source . The gas discharge ( plasma ) spreading throughout the recipient sublimes and oxidizes impurities adhering to the surfaces, e.g. B. organic compounds that are difficult to remove with other cleaning methods. In addition, the glow discharge is used as a source of excitation in carbon dioxide lasers .

The heat generated by the glow discharge is used to move bimetal sheets : in the conventional starter for a fluorescent tube and in the optical simulation of a flickering candle flame. By feeding one of 10 digit-shaped electrodes, the corresponding digit figure lights up in a display tube.

Glow discharge can be used in spectrometers for material analysis for elements on the surface of samples and can also selectively penetrate to a depth of 0.15 mm. Glow discharge is a way of generating plasma in order to influence the polymerization of reactants or to change the surfaces of plastics, for example to make polyethylene printable.

Spatial structure of the discharge stages 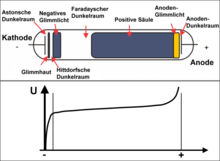 Names of the light and dark rooms of a glow discharge. Below: Spatial potential curve

Moving from the cathode to the anode , the glow discharge can be divided into eight successive layers:

Highly schematized current (I) -voltage (U) characteristic of a gas discharge:
1) Dependent discharge: When charge carriers hit the oppositely charged electrode, these are neutralized. For a steady flow of electricity, a constant new production of charge carriers is necessary. In the case of dependent unloading, this production takes place from the outside - in contrast to independent unloading, in which the production z. For example, by impact ionization occurs
2) glow discharge
3) arc discharge

In contrast to other forms of gas discharge, the temperature of the electrodes and walls remains low in the glow discharge, as only little heat is released due to the low current density and the associated impact of charge carriers.

Due to the low gas pressure typical of glow discharges, the mean free path of the electrons is greater than that of atmospheric discharges. This reduces the energy exchange between electrons and the heavier gas particles (atoms, molecules and ions ) during glow discharges , since the number of particle collisions decreases. The temperatures of the individual gas components therefore differ considerably from one another. If the mean energy of the electrons is converted into a temperature, the result is temperatures of 10 3 to 10 5  K. The temperature of the ions and neutral particles, on the other hand, remains close to room temperature. In this case, one also speaks of a non-thermal plasma .

The shape of the positive column depends on the interaction of the electrons with the glass tube. The glass tube slows the electrons, which increases their recombination rate and reduces the electron density. This gives the remaining electrons enough energy to ionize more atoms. If the diameter of the tube is too large relative to the electrodes, no positive column will form. For this reason, there are no spherical fluorescent tubes . Tubes with a smaller diameter allow higher gas pressures and shorter lengths for the same operating voltage.

A clear development of the luminous layers is only possible if there are very defined excitation states in the gas. For this reason, gas mixtures should not be used for observing the phenomenon in the experiment, and the gas should have a simple electrical excitation structure, as e.g. B. is the case with noble gases .