Schematic diagram of bimetal: In this case, metal 1 has the greater coefficient of linear expansion

A bimetal (also known as a thermal bimetal ) is a metal strip that consists of two layers of different metals on top of each other. The two layers are materially or positively connected to one another . Due to the different coefficients of thermal expansion of the metals used, one of the layers expands more than the other, causing the strip to bend.

For example, zinc or brass and steel are used . In the narrower sense, Invar is an iron-nickel alloy with a 36% nickel content (FeNi36 / 1.3912). In a broader sense, the term is also used as a generic term for a group of alloys and compounds which have very small or partially negative coefficients of thermal expansion in certain temperature ranges. 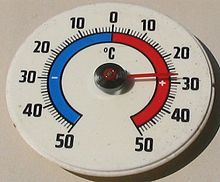 Two metals with different expansion coefficients lengthen to different degrees when heated. If two metal strips are connected over the entire surface by rolling or at the ends by riveting , the different extension leads to a bending of the bimetallic strip.

Bimetals are mostly produced in sheet metal or strip form.

The bare metal sheets free of oxide layers are rolled onto one another under pressure. In the contact zone, a permanent connection is created by cold welding and a subsequent diffusion annealing treatment. Alternatively, the sheet metal strips lying on top of one another are drilled through and riveted or screwed together.

To increase the deflection of the bimetal, the strips are also formed into a spiral spring.

Instead of an elongated strip, a slightly convex circular disc with a diameter of about 2 cm made of thin bimetal sheet can be used. When heated, the material on the inside of the shell expands, turning the disc inside out into a concave curvature. This component is bistable due to the rapid snap movement from the one-sided curvature to the other . It switches suddenly and powerfully. The spring tension of the bulge holds the disc in position on both sides until the tension becomes too great and the disc snaps around. It thus has a large hysteresis and contact stress.

Bimetals are used for control purposes, such as for temperature-dependent automatic actuation of valves, switching processes and sometimes also in measuring instruments.

In bimetal thermometers , a pointer is attached to the free end of a bimetal spiral, which moves on a circular path when the temperature changes and shows the temperature on a round scale.

Long-burning stoves often have a strong bimetal strip that mechanically opens or closes a slide for the supply air.

In shipbuilding , bimetals are also used to join different metals (usually steel and aluminum). Since the metals cannot be welded conventionally, bimetallic strips are used, which have been prefabricated by explosion welding . On the construction site, the methods commonly used in shipbuilding ( MAG / MIG ) can then be used, for example to weld one side to the steel hull and the other side to the aluminum deckhouse. 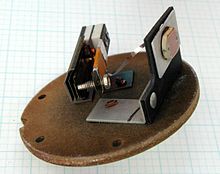 In an American, electromechanical twilight switch for street lighting, a light-dependent resistor ( LDR , right) is connected in series with the heating coil (orange) of the thermal bimetallic switch. In the dark, the electrical resistance of the LDR increases; when it cools down, the bimetal bends and switches on the circuit.

Bimetal switches are used in many heating devices , for example for regulating the temperature of irons and boilers, for controlling coffee machines , toasters and kettles .

In the temperature switch, the bimetallic strip opens or closes - in cooperation with a bistable spring element or magnetic adhesion - depending on the temperature, a contact which, for example, switches a heater on or off.

One end of the bimetal strip is fixed in temperature switches and thermal relays and the other end is provided with an electrical contact . Current sensors - In motor protection switches and miniature circuit breakers, bimetal strips are used that either carry a current themselves or have a heating coil.

If a bimetal strip is placed in the supply line of the filament of an incandescent lamp, the lamp starts to flash after a short heating-up time. The current flow is interrupted by the heating; when it cools down, the circuit closes again. A bimetal relay also works accordingly . 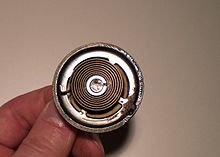 Applications in the automotive sector

K-Jetronic - a mechanically-hydraulically controlled, driveless single injection system for gasoline engines, in which the fuel is injected into the intake manifold. Manufacturer Robert Bosch GmbH, used since 1973.

Cooling water thermostats in motor vehicles used to contain a bimetal, whereas today's thermostats are operated by a capsule located in the coolant flow, which is filled with a so-called expansion material (a wax ).

In bimetal flasher relays, a wire winding wound around the bimetal strip is heated by the current flowing through the light bulb. The strip bends, opens the contact and cooled down again due to the interrupted flow of current. The strip, which returns to its original position when it cools down, closes the contact and the turn signal lamp starts to light up again. If one of the lights fails, the flashing accelerates. Today this function is simulated by charging a capacitor and semiconductor.

Components with a complex cross-section

Components such as B. L-profiles, T-profiles, H-profiles or components with a rectangular cross-section can often not be reasonably manufactured from metals with different coefficients of thermal expansion. If such profiles bend when heated, a plastic deformation of part of the cross-section usually occurs, so that the profile does not return to its original shape after cooling. 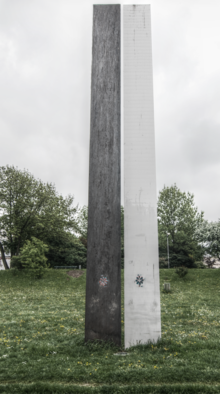 The work of art "Thermocouple" in Linz

In Linz in the Donaulände Park stands the slim sculpture “Thermocouple” ( Piotr Kowalski , 1977) made of two approximately 6 m high, approximately 50 cm wide and 3 cm thick bimetal plates. They protrude from the ground next to each other and are uniformly directed straight up at 0 ° C. When heated or cooled, they bend in opposite directions.

The strips consist on one side of ordinary, rusting steel (type OR37) and on the other side of shiny, stainless steel. They stand next to each other in a row. However, one stripe shows its rusty side while the other presents the shiny side. When heated, the stainless chrome-nickel steel expands more and bends the shiny strip away from the viewer, while the other, rust-brown one leans towards the viewer. In summer heat of 30 ° C, the ends of the strips are up to 1/2 meter apart, as the rusting steel extends by 2 mm, while the stainless steel stretches by 3 mm.