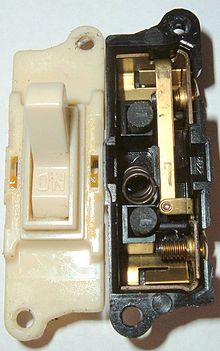 Insoluble connections are not absolutely insoluble; in order to solve them, however, an at least partial destruction of the connection is necessary.

Connections that can be detached with tools

Plug connections , screw connections with knurled screws or Edison threads ( lamps , screw locking devices) can be loosened by hand. Detachable connections have fewer operations than endure switch contacts, among them the preservation is the low contact resistance in the foreground. They are therefore often made of silver or gold-coated base materials. Other common coatings are tin and chrome . Uncoated, detachable plug and screw connections are made, for example, of copper , bronze or brass .

Switching contact in close-up from a relay. Left as good as new. Right after approx. 100,000 switching cycles with contact erosion

Switching contacts can be found in contactors , relays , buttons / switches . They are the most demanding electrical contacts because they often have to maintain their mechanical and electrical properties over many millions of switching cycles :

Despite its high conductivity, silver is only suitable to a limited extent for low switching capacities, as it forms silver sulfide layers.

The most important features of a switch contact specified by the manufacturer are:

Switching contacts (keys, keyboards) for high-resistance signals often consist of a pair of conductive rubber on the one hand and gold or graphite conductive paste on the other. They are particularly reliable and show little bouncing .

The bouncing of switching contacts is a periodic closing and re-opening at the moment of switching. With switching contacts for high switching capacity, it leads to increased contact erosion or even to welding ("sticking") of the contacts. Digital circuits sometimes work so quickly that, without countermeasures, the multiple contact with just one operation would be interpreted as multiple commands, which is why debouncing is necessary.

Sliding contacts (also sliding contacts) are used to contact moving parts. Examples are commutators , current collectors , slip rings and position sensors such as potentiometers or rotary encoders . Pairings made of copper / copper alloys and graphite as well as pairings made of precious metals are used.

High demands are placed on the surface coating of electrical contacts, especially in the case of electrical relays with many switching cycles . At voltages above 50 volts and high currents, arcs are formed. They can melt the base material and promote oxidation of the surface. Tungsten compounds are resistant to high temperatures, but have very high contact resistances. A gold coating conducts well and protects against corrosion, but wears off quickly.

For low-power relays up to approx. 20 amperes, the alloy silver-nickel is a good compromise. For high loads (100 amps), cadmium oxide , alloyed with silver ( AgCdO ) is considered optimal to prevent the contacts from welding. On the other hand, the RoHS guidelines stipulate that cadmium should be avoided if possible. Tin oxide , also alloyed with silver (AgSnO2), is a good substitute.

Types of contacts according to their control logic

The connection of a closer is in English as NO (normally opened), so normally open titled. (With normally is unconfirmed meant.) If the relay is not energized (its spool so energized), this contact is open.

This type of contact is therefore always used when a consumer is to be safely switched off when the control voltage is not applied to the relay ("safety control"). For this reason, contactors in household and industrial electrical installations are preferably equipped with working contacts. This is security relevant.

On the other hand, self-locking FETs or MOSFETs (enhancement MOSFET) are used in industrially manufactured semiconductor relays ( positive control logic ).

The connection of an opener is in English as , NC (normally closed) so normally closed titled. If the relay is not energized (its coil is de-energized), this contact is closed.

The marking of the contacts of automotive relays is standardized according to DIN 72552 :