The following important information is missing from this article or section:
Binary technology is only a small branch of digital technology. This article will jump back and forth between different topics. These are essentially: digital circuits, digital signals. There is a mixed jump back and forth between these topics, very sketchy, combined with interspersed island knowledge.
Help Wikipedia by researching and pasting it .

The digital technology is a branch of technical computer science and deals with the function of digital circuits . In these, the signal processing takes place with digital signals , i. H. with signals that are discretized (time-discrete) as well as quantized (value-discrete). It represents the counterpart to analog technology .

The most important form in practice is binary digital technology, which comprises only two discrete signal states. These are commonly referred to as logic zero (0) and logic one (1) . Non-binary digital circuits in which there are more than two value states represent, for example, MLC memory cells , where more than one bit of information can be displayed and stored per MLC memory cell . In addition, the non-binary digital technology is used in the context of digital signal processing such as digital modulation methods .

Electronic components in digital technology are, for example, logic gates , microprocessors and data memories . In analog technology , an analog signal can assume any number of value states; the transition takes place in so-called mixed-signal circuits, some of which have properties of purely digital circuits, such as analog-to-digital converters or digital-to-analog converters or clocked analog circuits . 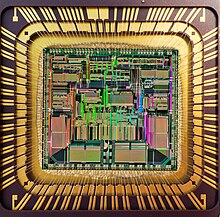 On a ceramic package bonded chip a Motorola 68040 - microprocessor

Binary digital technology, which is restricted to this in the following, uses the dual system with two possible signal states. These two values ​​are designated differently depending on the context. Examples for the designation are logical zero (0), L ( English low ), or "false". The second symbol is usually referred to as a logical one (1), H ( English high ), or “true”. If a high level is represented with 1 and a low level with 0, we speak of positive logic , and if the situation is reversed, negative logic .

The main components of digital circuits are logic gates such as NOT and NAND as well as capacitors as volatile memories; all other gates, counters , flip-flops and so on are built on this. More complex circuits are then represented by memory circuits and processors . In digital technology, the dual system (according to the above yes-no distinction) is usually used as a basis using switching algebra . In this way, a switching function can be created for each logic element that describes how it works. In practice, mostly only NAND gates are used, which can be used to simulate the functions of the other gates.

Digital circuits can additionally include logical functions to time-dependent components, and further clock - or state-controlled (synchronous / asynchronous) operate. If a digital circuit only contains logic elements without feedback from outputs to inputs, it is called a switching network . If additional memories are used, or if at least one output is fed back to an input, then it is a switching mechanism or an automatic machine . A microcontroller or processor mainly consists of these logic elements and is expanded with memories and other digital assemblies via a data bus . A staggered execution of logic links is possible. These can be hardwired or programmed.

Further advantages of digital signal processing compared to analog technology are, in addition to the lower costs of the components due to the high integration density and simplified development, above all the higher flexibility. With the help of special signal processors or computers , circuits can be implemented in software and programmable hardware ( PLDs ). This makes it easier to adapt functions to changed requirements. In addition, complex algorithms are easy to use that would only be feasible in analog form with great effort or not at all.

In digital technology, special developer tools can be used in the context of computer-aided engineering (CAE) and description languages ​​such as Very High Speed ​​Integrated Circuit Hardware Description Language (VHDL) or Verilog for the rapid development of new applications and circuits.

The number of components implemented on a chip is usually much greater in digital circuits than in analog circuits. A current microprocessor consists of billions of transistors, operational amplifiers of around 100 transistors and a power Darlington transistor of 2 transistors. However, this is compensated for by a high integration density on corresponding chips .