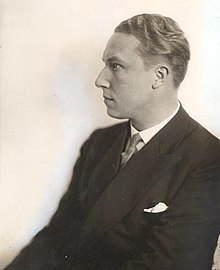 Douglas Sirk (born April 26, 1897 in Hamburg-Eimsbüttel , † January 14, 1987 in Lugano , Switzerland ; bourgeois Hans Detlef Sierck ) was a German film and stage director. Sirk initially worked in Germany as a theater and film director. Because of his Jewish wife and political opposition to National Socialism, Sirk fled Germany at the end of 1937. After his first American film in 1943, he was able to successfully establish himself as a director. In the 1950s, Sirk shot melodramas for films that set the style for the genre and received numerous positive reviews and analyzes in the specialist press.

Life until the seizure of power in 1933

Detlef Sierck spent his youth in Hamburg as the son of an elementary school teacher and later school principal. Vacation trips with the grandparents often went to Skagen . The young Sierck was very interested in art and culture and was greatly encouraged by his father. His maternal grandmother regularly went to the movies with little Sierck. After graduating from high school, Sierck was drafted at the end of the First World War and was a midshipman in the Reichsmarine. From 1918 he first studied law in Munich, then for a short time in Freiburg. He gave up law and began to study philosophy in Jena. He continued this from 1920 in Hamburg with Ernst Cassirer . But more and more he devoted himself to the history of art with Erwin Panofsky . He also worked as an editor for the Neue Hamburger Zeitung . He regularly visited theaters, cinemas, operas and concerts and exhibitions. He also painted himself. In 1922, Sierck gave up his studies. In the same year a translation of Sierck's Shakespeare sonnets was published in Hamburg. As early as 1920/21, on the mediation of Richard Dehmel , Sierck was given a position as assistant dramaturge at the Deutsches Schauspielhaus in Hamburg, and in 1921/22 he was promoted to dramaturge. In 1922 he directed there for the first time. Since Sierck was not allowed to perform Shakespeare plays in Hamburg, he went to Chemnitz after 1922/23. The Small Theater in Chemnitz ran into financial problems at exactly that time. The actors and the rest of the employees formed a collective whose director was Sierck. They kept their heads above water through popular comedies. The Bremer Schauspielhaus became aware of Sierck during this time and invited him as a guest director. In 1923 he staged Henrik Ibsen's pillars of society there with Albert Bassermann in the leading role. I liked his work there.

After the Chemnitz theater was closed, he took the position of senior director at the Bremen theater from 1923/24 to 1929. There he directed Arthur Schnitzler a . a. Anatol's wedding morning . He also staged The Tower of Hugo von Hofmannsthal, who was of Jewish descent . In 1930 Sierck staged Brecht's and Weill's Threepenny Opera . In autumn 1929 he was appointed artistic director of the Old Theater in Leipzig, which he remained until 1936. There he staged, among other things, the play The Sacco Vanzetti Trial . Shortly after the seizure of power in 1933, the anti-Nazi musical stage play Der Silbersee , written by Kurt Weill and Georg Kaiser , was about to be premiered. The performance was postponed and took place simultaneously in Leipzig, Erfurt and Magdeburg on February 19. The performances of this piece were first disrupted in Magdeburg by thugs from the Sturmabteilung (SA). Several performances took place in Leipzig, about which the local newspapers reported benevolently, before the Nazis prevailed. The Jewish general music director Gustav Brecher had to flee from the concert hall from the Brown Thugs on March 4, 1933 and went into exile with his wife. Kurt Weill also left the country a short time later with his wife.

Life after seizure of power

Then Sierk switched to guest productions abroad for some time. In 1934, Sierck turned to film. He received a contract as a director from Ufa, which lacked good directors after the forced flight of many well-known artists from Germany by the National Socialists. With the help of a special permit, he was allowed to make films. In 1935 he made his first film Supporting Society and in the following years was responsible for the rise of Zarah Leander , whom he discovered. Because of his success with Zarah Leander, Sierck received his passport back in 1937, which had been withdrawn due to a denunciation. Sierck's greatest success in Germany was the film final chord . In his first marriage, Sierck was married to the theater actress Lydia Brincken († 1947), who kept his name even after the separation, and had a son with her, the actor Klaus Detlef Sierck . The marriage ended in divorce in 1934. In 1934 Sierck married the actress Hilde Jary . Out of consideration for Hilde Jary, who was persecuted as a Jew, the couple left Germany in 1937 and first went to France via the Netherlands and then moved to the USA.

In the USA, where Detlef Sierck renamed himself Douglas Sirk , Sirk and his wife first had to run a chicken farm because it was difficult to find work in film. Siercks first tried his hand at scriptwriting. The director's chance came in 1942 after the assassination attempt on Heydrich and the atrocities of the Nazis in Lidice . The American government was interested in increasing the willingness of the population to become involved in World War II and had an anti-Nazi film made. In 1942, the MGM Sirk film studio gave the first directorial commission. That film was Hitler's Madman , a film about Reinhard Heydrich and Lidice. The film was the breakthrough for Sirk. It continued with the elegantly staged melodrama Sommerstürme from 1944, based on the play A Drama on the Hunt by Anton Chekhov . The critics praised the intelligent implementation of the original and especially the sensitive leadership of the actors, including Linda Darnell in her best role to date. In 1948 he was personally chosen by Claudette Colbert to direct the film Noir Sleep, My Love , in the course of which Don Ameche attempts to drive Colbert insane as an unsuspecting wife. In 1949 Sirk tried again for a short time in Germany, but he soon returned to Hollywood, where he finally found his new artistic home at Universal Pictures . In the 1950s he became one of the most successful directors of melodramas, which became his trademark. Together with producer Ross Hunter , he made some of the most stylish films in the genre from 1953, often as remakes of old universal classics. After a few smaller films he found All my longing , which describes the fate of a woman with a dubious past, played by Barbara Stanwyck , as his actual formal language as a director. In his films the individual fights for a place for his feelings against the conformist and restrictive codes of conduct of society.

In Jane Wyman , Sirk found his ideal actress for the emotional fate of women. The two films The Wonderful Power of 1954 and What Heaven Permits from 1955 were successful at the box office, but received only mixed response from critics. In addition, they ensured the rise of Rock Hudson to the studio's top star, who performed his best acting performances under Sirk's direction. In the years that followed, Sirk made some of the best films of the genre in The Wind , Battle Hymn , The Tarnished Angels, and Time to Live and Time to Die . With the latter film in particular, a sensitive adaptation of the novel of the same name by Erich Maria Remarque with Liselotte Pulver , Sirk won the special respect of Jean-Luc Godard and François Truffaut , who were enthusiastic about the innovative use of new techniques such as Cinemascope and Technicolor for the description also sensitive and intimate moments. In 1959 Sirk made his last and financially most successful film with Solange There People with Lana Turner and Sandra Dee in the lead roles. The flick offered a low-key study of racial prejudice and the inability to combine emotions and careers. Juanita Moore was nominated for an Academy Award for Best Supporting Actress for her portrayal of a self-sacrificing mother.

At this height of his success in Hollywood, Sirk said goodbye to America and moved to Lugano , Switzerland. In the 1960s he sporadically directed several plays in Germany, especially at the Hamburg Thalia Theater and the Munich Residenztheater . He turned down various offers to direct a film again. From 1974 to 1978 he taught as a guest lecturer at the University of Television and Film Munich , where Rainer Werner Fassbinder attended one of his courses. In 1978 he received the German Film Prize for his life's work and the Bavarian Film Prize in 1986 . He died in Lugano in 1987 at the age of 89.

Sirk is one of the most valued directors of the 1950s today. Back then, however, it was different: while his films were popular with audiences at box-office hits, most critics despised them as "sappy and cheesy". After he was praised by the filmmakers of the Nouvelle Vague in the 1960s as an example of an auteur filmmaker , Sirk is now one of the most respected filmmakers from the Hollywood of the studio system era. His melodramas from the 1950s received the most attention, while his productions in other genres are even less studied or viewed as weaker. Rainer Werner Fassbinder was sometimes ecstatic about the cinematic qualities of Sirk and always frankly admitted that he was influenced by his work. Even Pedro Almodóvar and Kathryn Bigelow count him as their role models. Wim Wenders called Sirk a " Dante of Soap Operas" who was able to convey the dark sides associated with the American Dream in dramatic images.

Other aspects of Sirk's work were appreciated, including the excellent camera work and the many symbols that he had often incorporated into his mise en scène : In Was der Himmel allows , for example, he repeatedly uses barred windows to reflect the imprisonment of the characters in their conventions express, and several times in the film he uses a deer as a symbol. His use of color is also often commented on - most of his Technicolor films are characterized by appealing, but almost exaggerated colors. The colors underlined the artificiality of American society, but at the same time increase the emotional aspect of the film plot through their color dramaturgy. In his works, Sirk repeatedly criticized the repressive lifestyle and the strict social rules in America: "Sirk's melodramas are about people who are trapped in their homes and social morals."

The Hamburg Film Festival has been awarding the Douglas Sirk Prize annually since 1995 to a personality who has made outstanding contributions to film culture and the film industry.