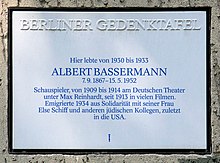 Albert Bassermann (born September 7, 1867 in Mannheim ; † May 15, 1952 on the flight from New York to Zurich ) was a German theater and film actor . Since the end of the 19th century he has been considered one of the most important German-speaking stage artists and was the bearer of the Iffland-Ring . 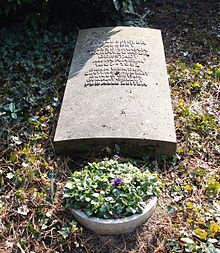 Albert Bassermann came from the Baden-Palatinate merchant family Bassermann , he was the son of the sewing machine manufacturer Johann Wilhelm Bassermann (1839–1906) and his wife Anna nee. Pfeiffer (1841–1902) born in Mannheim. His uncle was the actor and theater director August Bassermann . Bassermann first made a commercial apprenticeship and studied chemistry from 1884 to 1886 before starting an acting course in 1887.

After engagements in Mannheim and Basel , he worked at the court theater in Meiningen for four years before coming to Berlin in 1895. From 1899 he was engaged by Otto Brahm (until 1904 at the Deutsches Theater and then until 1909 at the Lessing Theater ). Max Reinhardt brought him back to the Deutsches Theater from 1909 to 1915. After that, Bassermann no longer belonged to an ensemble and worked as a freelancer.

Albert Bassermann received the Iffland-Ring from Friedrich Haase in 1911 . After his death, the ring that Bassermann placed on the coffin of the late Alexander Moissi was passed on to Werner Krauss by the Cartel Association of German-Speaking Stage Members in 1954 . Since then, the ring has been owned by the Republic of Austria .

Bassermann was one of the first German theater actors to get involved in the film. As early as 1913, he played the main role of the lawyer Haller in Max Mack's The Other (it was also his first film) based on the play of the same name by Paul Lindau . In numerous other film appearances in German silent film, he worked under Richard Oswald , Ernst Lubitsch , Leopold Jessner and Lupu Pick .

Emigration and an international career

Bassermann, who had participated in the world premiere of Hanns Johst's play Schlageter on April 20, 1933 , left Germany in 1934 because of his wife, the actress Else Bassermann , who was discriminated against as a Jew , and initially emigrated to Austria. After Austria was annexed to the National Socialist German Reich , he left Vienna with his wife Else on March 13, 1938 and lived in the USA from then on . In Hollywood , although he only spoke the English language with a very strong Mannheim accent, he became a sought-after character actor . Albert Bassermann was nominated for an Oscar for his supporting role in Alfred Hitchcock's The Foreign Correspondent (1940) . In 1944 he made his stage debut on Broadway in an English-language play, as Pope in the world premiere of the stage adaptation of Franz Werfel's novel The Embezzled Heaven .

After the war, Bassermann returned to Europe in 1946. During a guest appearance at the Vienna Volkstheater he played in Paul Osborn's Der Himmelwart (Death in the Apple Tree) as well as in Henrik Ibsen's master builder Solness and - "in favor of the political victims of Nazi terror" - in Ibsen's Ghosts, both directed by Walter Firner and in the set by Gustav Manker . The premiere was attended by Federal President Karl Renner , Federal Chancellor Leopold Figl , Vienna's Mayor Theodor Körner and representatives of the four allied occupying powers. However, as Fritz Kortner put it , Bassermann allegedly returned as a “broken old man (...). The audience could no longer warm up to the dying man ”. Nevertheless, Bassermann often took part in touring theater in the last years of his life and also had numerous German-language radio play roles: including Michael Kramer in the drama of the same name, Vater Knie ( Katharina Knie ), Striese ( The Robbery of the Sabine Women ), Nathan ( Nathan the Wise ), Attinghausen ( Wilhelm Tell ).

He also played in America and commuted back and forth between his new and old homeland for work. He played his last film role in 1948 in the legendary British ballet film The Red Shoes .

Bassermann, who had been married to Else Bassermann, born Elisabeth Sara Schiff (1878–1961) and father of a daughter, since 1908, died on a flight from New York to Zurich and is buried in the main cemetery in Mannheim . Albert Bassermann's birth town named a street after him. His daughter Carmen was killed in a traffic accident in 1970.

A barrel-vaulted slab made of shell limestone lies on his grave.

When he died, Bassermann left a pocket watch, the so-called Albert Bassermann watch , which the actor Martin Held received at his request in 1952 in recognition of his art. This watch has since been passed on to the actor Martin Benrath and then to the radio play director and long-time director of the Süddeutscher Rundfunk, Otto Düben . The current sponsor has been the actor Ulrich Matthes since May 1, 2012 .

He was also an honorary member of the German Theater Members' Cooperative .

Bearer of the Iffland Ring