Ernst Lubitsch (born January 29, 1892 in Berlin ; died November 30, 1947 in Los Angeles , California , USA ) was a German film director and actor with US citizenship. After he was able to celebrate his first successes as a director in Germany, he moved to Hollywood in the 1920s . There he made a name for himself above all as a director of cultivated and elegant “salon comedies” - the special charm of which film critics later described as the Lubitsch touch . Shortly before his death, Lubitsch received an honorary Oscar for his life's work.

Much information not proven

Ernst Lubitsch was the son of the dressmaker Simcha (Simon) and his wife Anna (née Lindenstaedt) Lubitsch. His parents were Ashkenazi Jews , the father came from Grodno in what is now Belarus, the mother from Wriezen in Brandenburg . He attended the Sophiengymnasium in Berlin (with his later colleague Lothar Mendes ). After an apprenticeship as a fabric dealer, Lubitsch became a student of Max Reinhardt , the director of the Deutsches Theater in Berlin at the time. First appearances at cabarets and cabaret stages followed until he was hired as an actor at the Deutsches Theater in 1911. 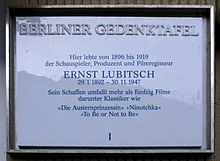 Berlin memorial plaque on the house at Schönhauser Allee 183, in Berlin-Prenzlauer Berg

Lubitsch had his first verifiable film role with Deutsche Bioscop GmbH in the film The Ideal Wife , where he was signed for a short time. Lubitsch later directed himself, his first film was Blindekuh , and occasionally appeared as an actor. After initially shooting mainly slapstick films, from 1919 onwards he increasingly changed genres and alternated between historical costume films and comedies, preferably starring Ossi Oswalda as well as Emil Jannings or Pola Negri . Lubitsch's film team regularly included the screenwriter Hanns Kräly , the cameramen Theodor Sparkuhl and Alfred Hansen, and the production designer Kurt Richter .

Emigration to the USA

In 1922 Lubitsch emigrated to the USA, making him the first European director of high standing in Hollywood.

After the international success of the period films Anna Boleyn and The Pharaoh's Wife , Negri, Jannings and Lubitsch moved to Hollywood one after the other. In 1922, Lubitsch was hired by Mary Pickford as a director for her next film, with which she attempted to expand her previous repertoire from little-girl roles to more feminine representations. Even beforehand, tensions arose in some cases after Pickford abandoned the original plan to film Faust on the advice of her mother. In return, Lubitsch refused to accept the costume drama Dorothy Vernon of Haddon Hall as material. Instead, the parties agreed on Rosita , who tried to turn Pickford into a mandolin player in Spain. Although the film was well received by critics and audiences, Pickford dropped the option to make another film. Lubitsch then received a contract with Warner Brothers , for which he worked for three years, before moving to Paramount . The films of the time are mostly elegantly staged romances and salon comedies like Lady Windermeres Fan and Kiss Me Again . But Lubitsch also made period films like The Forbidden Paradise , which brought him back together with Pola Negri , and with Der Patriot a monumental film, Emil Jannings' last great success in the USA. Under the motto Goodbye Slapstick - Hello Nonchalance! the studio advertised Lubitsch comedies and the critics soon noticed the famous Lubitsch touch . This touch, so to speak the trademark of his sometimes frivolous social comedies, consisted in not showing all the details of the plot, but leaving it to the viewer to complete the plot. In America, which at that time was still morally strict, with its strict censorship regulations, Lubitsch was able to integrate risky situations and ambiguities into the plot in this way , without slipping into slippery or vulgarity. The American critics liked to describe this mixture as naughty, but nice (German: naughty, but nice).

His prestige rose rapidly, and in 1927 Irving Thalberg entrusted him with his wife Norma Shearer for the film Alt-Heidelberg , an opulent film adaptation of the operetta The Student Prince . Two years later, Lubitsch filmed the romantic adventure romance The King of Bernina with Camilla Horn and John Barrymore . In 1929 Lubitsch became the most famous director in Hollywood when he not only made a star out of Maurice Chevalier with the musical Love Parade , but also knew how to use the innovation of talkies in the best possible way. The film Monte Carlo from the following year contained many technical innovations that permanently improved the use of sound technology. Thanks to the success of The Smiling Leutnant , musicals slowly became en vogue again in 1931 , after an oversupply affected the audience's taste to the detriment of the genre.

Excursions into the dramatic field were not accepted by critics and audiences and the failure of the war drama The Man Who Driven His Conscience , which starred Nancy Carroll and Phillips Holmes in 1932 , convinced the director to only make comedies in the future. In the period that followed, he shot two of his style-defining works with Troger in Paradise and Serenade for three , which particularly impressed Billy Wilder . Wilder later wrote various scripts for Lubitsch. In 1934, at the personal request of Louis B. Mayer and Irving Thalberg , Lubitsch was loaned from MGM to take over the production of The Merry Widow with Maurice Chevalier and his long-time partner Jeanette MacDonald . MacDonald got the role, however, after Grace Moore had not been able to agree with Chevalier on the order of the naming of the title.

Lubitsch tried twice to bring Marlene Dietrich , whose career had stagnated since the middle of the decade, back into the favor of the public. While the comedy Perlen fortunately , the production of which Lubitsch closely monitored, was still fairly successful in 1936, the failure of Engel the following year convinced those in charge at Paramount to release Marlene Dietrich from her contract.

After Lubitsch became head of production at Paramount for a short time in 1936, he switched to MGM in 1938 to shoot the film Ninotchka with Greta Garbo . Garbo wanted Lubitsch to direct Queen Christine in 1933, but the plans came to nothing. The studio advertised with the tagline Garbo Laughs and the film grossed over $ 1 million in the US. Garbo was nominated for an Oscar and one critic said succinctly about the film's chances of success in Russia: Stalin won't like it. (Eng .: Stalin will not like it.) In 1938, Lubitsch was appointed as a representative European filmmaker in Hollywood by Paul Kohner as President of the newly established European Film Fund - a fund that was supposed to support European filmmakers who had emigrated to the United States in need . He remained its president until his death in 1947.

After the film classic Rendezvous after closing time and the Merle-Oberon comedy Ehekomödie , which was not very successful when it was released , Lubitsch made his most famous film in 1942, the Nazi parody To be or not to be based on the text Poland is not lost yet by Melchior Lengyel . The leading actress Carole Lombard died shortly before the premiere in a plane crash. The New York Times read critically: As it is, one has the strange feeling that Mr. Lubitsch is a Nero , fiddling while Rome burns. (Eng .: You can't get rid of the strange feeling that Mr. Lubitsch is a Nero who makes music while Rome is on fire.)

In 1945 Lubitsch suffered a heart attack while filming Scandal at Court , from which he never fully recovered. Scandal at court had to be completed by Otto Preminger . In 1946 he shot Cluny Brown on the loose , targeting pre-war English society and its customs. In spring 1947 he received an honorary Oscar for his innovative direction and life's work. On November 30, 1947, Ernst Lubitsch died in Hollywood of another heart attack. He was buried in the Forest Lawn Memorial Park in Glendale , California. The shooting of his last film The Woman in the Hermelin had to be completed again by Otto Preminger.

In 1922 he married the actress Helene Sonnet Kraus (also known as Irni Kraus), from whom he divorced in 1930. Both were photographed by the Berlin society photographer Frieda Riess . On July 27, 1935, he married the British actress Vivian Gaye (real name Sania Bezencenet ). With her he had a daughter, Nicola Lubitsch, who was born on October 27, 1938. Nicola and her nanny Consuela Strohmeier were on board the British ocean liner Athenia when it was sunk in the Atlantic by a German submarine with over 1000 people on board on September 3, 1939 . Strohmeier let the child sit on her shoulders in the water until both were rescued.

He has stars for his work on the Hollywood Walk of Fame and on the Boulevard der Stars in Berlin. The Ernst Lubitsch Prize is named after him.

Lubitsch was known as an autocratic director who left his actors little room for interpretation. Both Mary Pickford and his fellow directors Josef von Sternberg and Clarence Brown said that the actors would play Lubitsch on screen instead of putting their own personalities in the foreground. Many of his films were also characterized by the fact that Lubitsch left certain processes and events in his films to the audience's imagination. Lubitsch said: “Every good film is filled with secrets. If a director doesn't leave a few things unsaid, it's a lousy movie. (...) A film is good when it is mysterious, with things unsaid. "

Star on the Boulevard of Stars