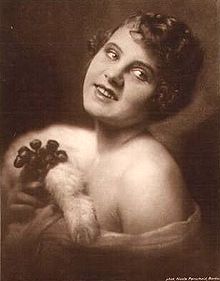 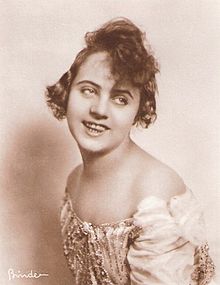 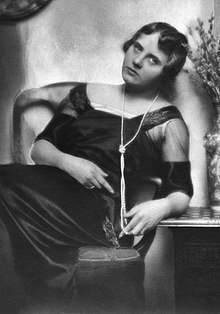 Oswalda was born as the daughter of a high school teacher in Niederschönhausen (a district of Berlin since 1920). The father died when she was four years old, so she grew up with her deaf-mute mother. After taking dance lessons as a prima ballerina with Eva Peter , she went to a Berlin theater as a choir dancer , where she was discovered in 1916 by Hanns Kräly , to whom she recommended Ernst Lubitsch . Between 1916 and 1920 she made around a dozen films almost exclusively with Lubitsch, the majority of which are now considered lost. Other directors also knew how to use their talent. Scruffy, cocky and flashy, she became a crowd favorite, which is why she was soon referred to as "the German Mary Pickford ". Alongside Henny Porten and Asta Nielsen , she was "one of the first great female stars in German film."

In 1921, Oswalda founded her own film company Ossi-Oswalda-Film , which was headed by her then husband Gustav Freiherr von Kóczián-Miskolczy (in a later marriage father of the actress Johanna von Koczian ). The director of the films she produced was her film partner Victor Janson . From 1925 she was under contract with Ufa and starred in around 50 silent films until 1930.

The sound film marked the end of her film career. In 1943 she wrote the screenplay for the film The Fourteenth at the Table ( Čtrnáctý u stolu ). Then it went quiet about the former silent film diva. In the last years of her life, the once celebrated star fell into oblivion. She died completely impoverished in Prague in 1947. She was buried in the Olšany cemetery in Prague.

In Schuhpalast Pinkus , her first film and her first collaboration with Ernst Lubitsch, Oswalda only played a tiny role as an apprentice and the daughter of a shoe seller and was initially given smaller roles in the following films. At that time it was still under the name "Miss Storry". Oswalda played her first leading role in 1917 in Lubitsch's Wenn vier do same thing , in which she was first perceived as the backfish of German films in the succession of Dorrit Weixler , who died in 1916 .

"Ossi Oswalda as Backfisch is so delightful, so naive and cocky and plays her somewhat stereotypical role so charming that the loss suffered by the German film industry with the death of Dorrit Weixler, the first and so far unsurpassed Backfisch actress, has by far made up for it becomes. Personally, I place Ossi Oswalda as a mimic even higher than her predecessor. "

Oswalda quickly became a prominent comedian - "the wild screeching maid who wants to assert her head against fathers, guardians and, if necessary, husbands and does not fit at all with the civic ideal of the submissive , quietly tolerating housewife."

As Oswalda's "probably ... best comedy" I don't want to be a man in which she plays the main female character Ossi , as in several of Lubitsch's films . She appears here in the "until then typical role of the spoiled and cheeky young woman who evidently grew up without parents and fiercely defends herself against the discipline that her uncle and above all the governess want to impose on her ". As a woman, she gives herself completely to her (in) female needs and smokes, drinks, plays poker and likes to go shopping. As the first German actress, she embodied an image of women in which "erotic attraction is softened by the boyish girl ". Her portrayal, also in later films such as Die Ausernprinzessin , had unrestrained and sometimes rough features, which also met with rejection. Béla Balázs wrote with regard to The Oyster Princess : "An Ossi-Oswalda film [can] be recognized by a series of raw, bochesque tastelessnesses." Other critics rated the overdriven roles as dubbing:

“Ossi Oswalda delighted [in I don't want to be a man ] with her bubbly temperament, her exuberant mood and her mischievous coquetry. Nonetheless, it could increase its effectiveness if it wanted to curb its agitation a little and moderate its facial expression, which sometimes increased to the point of facial distortion. You can be incredibly funny and cheer up without underlining it so obtrusively. "

While Oswalda was the backbone of German film in the 1910s, her image changed in the 1920s to "a" Berlin girl "with sophisticated attitudes, good for ecstatic dance performances in extravagant costumes."