Glendale is a city in the US state of California with around 191,000 inhabitants (as of the 2010 census ). It is located in the Los Angeles area and is the third largest city in Los Angeles County . The urban area has a size of 79.4 square kilometers. The city is bordered by Burbank to the northwest , Atwater Village ( Los Angeles ) to the southwest, and Pasadena to the east . The Los Angeles River also flows through the town .

Today it is primarily a residential city in the Los Angeles area. About half of Glendale's population was not born there. The 2010 census showed a population of just over 191,000, making it the third largest city in Los Angeles County. Compared to the previous census in 2000, this is a slight decrease from around 2000 residents. Nevertheless, the population has risen steadily since the beginning of the 20th century, and the 100,000 mark was exceeded in the mid-1950s. In the 1980s, the population exceeded 150,000. Glendale experienced the greatest population growth in the first three decades of the 20th century, when the population rose by more than 300 percent over a period of ten years.

Glendale is home to a large Armenian community . In 2005, 40 percent of Glendale's residents were of Armenian descent. Armenians also have a majority in the city council. Some of the Armenians fled the civil war in Lebanon from 1975 onwards .

White Americans of European descent make up a clear majority, around 61 percent of the population, even if their number has declined over the past decade. Around 17 percent of Glendale's residents are of Hispanic descent, so-called Latinos . Citizens of Asian descent are represented in the city with 16 percent for California standards, while African American and other ethnic groups are minorities.

From 1926, an all-metal airship , the "City of Glendale" , was built at Glendale Airport under Thomas Benton Slate . However, it already broke shortly after the first rollout in 1929.

The US headquarters of Nestlé and DisneyToon Studios are also located in Glendale . 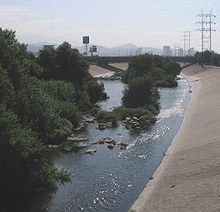 The Los Angeles River in Glendale