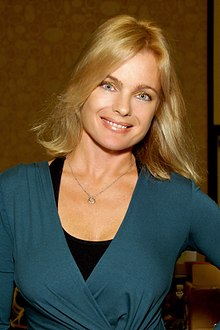 Erika Maya Eleniak (born September 29, 1969 in Glendale, California ) is an American actress and former playmate . She was best known for the role of Shauni McClain in the television series Baywatch .

Eleniak's father, who came to the United States from Canada to become an actor, also encouraged his daughter to get involved in the field. As a child, she appeared in various commercials and in the following years repeatedly worked as an advertising model . She first appeared in a film in 1982. In ET - The Extra-Terrestrial she played Elliot's classmate during Frog - Sezierungs scene in which Elliot kissed her at the end. After becoming addicted to alcohol and other drugs in high school , she defeated her addiction in 1988 and landed various minor roles on series such as Charles in Charge and Broken Angel .

In 1989 she tried to become a Playmate to give momentum to her stagnant career. Her plan worked, and after appearing in two Playboy issues, she was offered a lead role on the new Baywatch series . She worked on the hit series for two seasons until she left it because of her partner and co-star Billy Warlock , making room for Pamela Anderson . After separating from Warlock in 1992, she achieved her greatest success to date: In addition to Steven Seagal , she played a playmate on Red Alert . A year later, the comedy The Beverly Hillbillies Are Going! released, but flopped considerably. Her next film, Chasers, by director Dennis Hopper, was also unsuccessful.

In the following years Eleniak tried different independent and television films. However, she was denied further success. Eleniak has a daughter born in 2006.