Pamela Denise Anderson (* 1. July 1967 in Ladysmith , British Columbia , Canada ) is a Canadian - American actress and a pinup -Girl. She became an international star in her role as a lifeguard in the hit series Baywatch . She is considered the sex symbol of the 1990s. 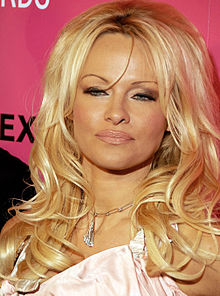 Discovered at a football game in 1989, Anderson immediately received offers for commercials with which she caused such a sensation that the first Playboy cover followed that same year . The following year she moved to Los Angeles to try her hand at actress.

Anderson became known on television for her appearance as Lisa in the US comedy series Listen, Who's That Hammering with Tim Allen . However, she became famous through the television series Baywatch , in which she played the lifeguard Casey Jean "CJ" Parker from 1992 to 1997 . During this time she was also seen in the TV movies Snapdragon, Good Cop, Bad Cop (1994) and Naked Souls .

Her first movie Barb Wire - Flucht in die Freiheit (1996) was a commercial success, but she received the negative award Golden Raspberry as worst newcomer and two other nominations for her acting performance . She then played the lead role of Valery Irons, the figurehead of a bodyguard company, in the self-produced series VIP - Die Bodyguards .

In 2003 she dubbed the cartoon series Stripperella , the main character of which is based on her own person. This was followed by the sitcom Stacked , in which Anderson played the lead role of the attractive bookseller Skyler Dayton .

After she had herself photographed in a Canadian flag for Bryan Adams ' book Made in Canada , she sang as a "replacement" for Melanie C. on his greatest hits album , released in October 2005, in the duet When You're Gone .

In 2007 she was assistant to the magician Hans Klok for five months on the Las Vegas show The Beauty of Magic .

Anderson has been the face of designer Vivienne Westwood's advertising campaigns since 2009 .

In spring 2010, she took part in the tenth season of the American television show Dancing with the Stars . The season achieved the highest ratings since the show began.

In 2016, Anderson starred in the music video for the single Le Lac by French singer Julien Doré .

In 2018 she took part in the ninth season of the French dance show Danse avec les stars . 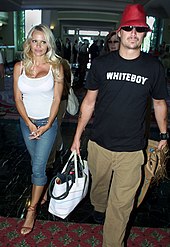 Anderson's marriage to Tommy Lee , the drummer and scandal rocker of the heavy metal band Mötley Crüe , from which two sons emerged, made headlines in the tabloid press . The high-profile couple was a popular topic in the rainbow press. When Anderson suffered a miscarriage, the paparazzi made an attempt to stop the ambulance and take pictures of her. Their joint, privately shot amateur porn video, which they recorded while on vacation on a houseboat on Lake Mead in 1995, also achieved fame : They kept the videotape in a 500-pound safe that was built into the basement of Tommy Lee's recording studio and was covered with a carpet. When Anderson and Lee were on a trip to London, there were craftsmen in their mansion, including an electrician who used to be a porn actor and was well connected to the adult industry. When the couple returned from their trip, the massive safe was stolen, in which, in addition to the video tape, there was also jewelry. Lee and Anderson suspect that said electrician stole the videotape and resold it. A short time later, the Internet Entertainment Group published the private video in the internet, which was still a new medium at the time, and as a high-volume copy in stores. The couple took legal action against it, but were unsuccessful in court: The judge ruled that Pamela Anderson and Tommy Lee are famous personalities of public interest and that the distribution of such a video film is therefore legitimate. In 1998, Lee was sentenced to four months in prison for having reported him for assault. Eventually the marriage ended in divorce on February 28, 1998.

Between 2000 and 2001 she had a relationship with the Swedish top model Marcus Schenkenberg .

In late July 2006 she was married to Kid Rock for the second time, but she filed for divorce in November of that year. That same month, Anderson miscarried repeatedly .

On October 6, 2007, she married producer Rick Salomon . They got married in Las Vegas during a break from the stage of the magician Hans Klok , on whose show she was working as an assistant at the time. However, at the end of March 2008, the marriage was annulled.

From 2016 to 2019 she was in a relationship with the French national soccer player Adil Rami . she separated from him in June 2019.

On January 20, 2020, she married the film producer Jon Peters . As early as February 1, it became known that the two separated again.

Anderson lives vegan and is an advocate for animal rights and an active member of the animal rights organization PETA . She has been a vegetarian since she was a teenager . She is also the Chair of the Sea Shepherd Conservation Society .

Anderson made it onto the cover of Playboy a total of 14 times . This makes her the most popular playmate of all time.

In 2013 she ran the New York City Marathon for the benefit of an aid organization for earthquake victims in Haiti , for which she had collected 75,000 US dollars , in a time of 5:41 hours. Her brother Gerry accompanied her on the run.

In March 2002, Anderson announced that it to Hepatitis C suffer. In May 2014, she made public that she had been raped several times in her childhood and youth . Her love for animals helped her to process these experiences.

Anderson called for the election of Jean-Luc Mélenchon in 2017 . Regarding the actions of the yellow vests movement , she said: "I hate violence, but what is this violence of all these people and what are burning luxury cars compared to the structural violence of the French - and global - elites?" Anderson, who Julian Assange regularly in the Ecuadorian Had visited the embassy in London and referred to him as a “hero” several times on her Twitter user account, was outraged about his arrest on April 11, 2019 by the British police.

“My breasts have had a brilliant career. I've just tagged along for the ride. "

"My breasts had a fabulous career - I just kept trotting along."