Dennis Lee Hopper (born May 17, 1936 in Dodge City , † May 29, 2010 in Los Angeles ) was an American actor and director . As a director he directed the influential cult film Easy Rider (1969), in which he also played one of the leading roles. In his roles in films such as Apocalypse Now , The American Friend , Blue Velvet and Speed , he embodied in particular non-conformist or violent outsiders.

Dennis Hopper grew up on a farm in Dodge City, Kansas before moving to San Diego with his parents . There, actress Dorothy McGuire encouraged him in the mid-1950s to go to Hollywood and seek his fortune in the film business.

After a few appearances on television, he was signed by Warner Brothers . He had two of his first film roles in the James Dean classics ... because they don't know what they're doing and giants . Dean was also one of his friends privately; they both shared a passion for fast cars and motorcycles. However, since Hopper was regarded as stubborn and unteachable, he was rarely offered leading roles. He attended the Lee Strasberg School The Actors Studio and appeared in a few westerns in supporting roles. He met Peter Fonda through B-movie director Roger Corman and became friends with him.

In 1969 they shot the road movie Easy Rider on a budget of around $ 400,000 . The film became a cult film of the hippie movement and ultimately a legend, as did the famous theme song Born to Be Wild . One reason for this was that it was fundamentally different from anything that had previously been seen in the cinema. Easy Rider didn't fit into any scheme, didn't look outdated, but fresh - New Hollywood was born and had found three of its first heroes in Dennis Hopper, Peter Fonda and Jack Nicholson .

Hopper was still considered an eccentric . With his next directorial work The Last Movie , he won the Critics' Prize for Best Film at the Venice Film Festival in 1971 . But in Hollywood, Hopper received consistently bad reviews. Since he came into conflict with most directors due to his idiosyncrasy, he was on a so-called black list for a long time . For this reason he had little commercial success in the 1970s and 1980s, with the exception of his supporting role as a journalist in the award-winning milestone of the New Hollywood era Apocalypse Now (1979). 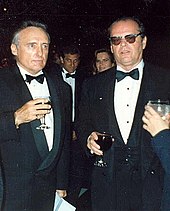 Dennis Hopper (left) with Jack Nicholson at the 1990 Academy Awards

Dennis Hopper shot a lot in Europe and worked a. a. with the German director Roland Klick for the film White Star . Wim Wenders brought him for Der American Friend u. a. together with Bruno Ganz and Lisa Kreuzer in front of the camera.

In 1986, Hopper caused a stir in the role of a sadist in David Lynch's Blue Velvet . In 1988 he reached a wider audience for the first time since Easy Rider with his directorial work Colors . After a long stay in a therapy facility because of his high drug and alcohol consumption , he moved back from Texas to Los Angeles . In the following years he was seen in several Hollywood productions - mostly in supporting roles.

One of his best-known films from the 1990s is Speed , in which he plays the psychopathic criminal Howard Payne who tries to blow up a bus. But that's just one of almost 50 projects Hopper worked on in the 1990s. In total, he has made over 140 films.

The German voice actor for Hopper has been Joachim Kerzel since 1976 .

Two of his greatest passions besides acting were photography and painting. His works have been exhibited worldwide. His photographs from 1961 to 1967 were exhibited for the first time in Europe under the title Dennis Hopper: The Lost Album by the Martin-Gropius-Bau in Berlin in autumn 2012. These are recordings that Hopper made in various locations in the United States. They show everyday situations as well as celebrities from the 1960s such as B. Paul Newman , Phil Spector , Jane Fonda , Ike & Tina Turner , Andy Warhol and Martin Luther King on the march from Selma to Montgomery . Some of the photographs had already been published in magazines such as Vogue or Artforum .

In 2010 the Museum of Contemporary Art, Los Angeles (MOCA) dedicated an exhibition to the visual artist Dennis Hopper : “Dennis Hopper Double Standard”. The exhibition was curated by Julian Schnabel , who calls Hopper an artistic role model. Hopper had also been an art collector since the 1960s , screen prints and pictures by befriended Pop Art artists were his first purchases. In November 2010 and January 2011, large parts of his art collection were auctioned off in Christie's New York auction house for the benefit of his heirs.

Hopper has been married five times, with

He had four children from four different women. In January 2010, Hopper filed for divorce from Duffy.

Hopper died of complications from prostate cancer in his Venice home . He was buried in Taos , New Mexico . Large parts of the cult film Easy Rider were made at this location and its surroundings .