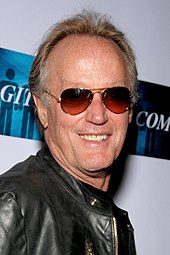 Peter Henry Fonda (born February 23, 1940 in New York City , New York - † August 16, 2019 in Los Angeles , California ) was an American actor and film director . He achieved worldwide fame through the film Easy Rider , which made him an icon of the counterculture .

Like his father Henry Fonda , Peter Fonda began his career in the theater, where he made his acting debut in 1960. In 1962 he was seen for the first time on television with a guest role in the series Gnadenlose Stadt . First cinema roles followed in 1963 and Fonda was nominated for a supporting role in the star-studded war film Die Sieger for a Golden Globe Award for best young actor . At first he seemed to be subscribed to well-behaved romantic lover roles. That all changed when B-movie director Roger Corman cast him in the role of leader of a motorcyclist gang in his film Die wilden Engel . The cast was obvious and suited the young actor, as Peter Fonda was also enthusiastic about motorcycles in his private life. With his subsequent films, Peter Fonda acquired a reputation as the “black sheep” of the Fonda family, as many of his film projects were controversial and his characters often appeared untamed or even violent. In 1967 he played again under Corman's direction in the film The Trip , which thematized and showed the use of drugs. 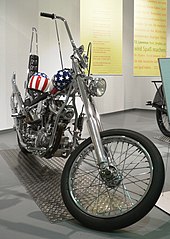 He finally became known to a large audience with the road movie Easy Rider , in which he played the main role of Captain America (Wyatt) . The film is considered New Hollywood's first major success and the scenes in which the Wyatt portrayed and his friends drive through the southern United States on their choppers to the song Born to Be Wild are considered classics of film and music culture. In addition to being in front of the camera on Easy Rider, Fonda co-produced and co-wrote the script, which earned him an Oscar nomination for Best Original Screenplay . His role in Easy Rider made him an icon of the American " counterculture " at the end of the 1960s , comparable to the more well-known term in Germany of the '68 movement . For example, he inspired John Lennon to write his song She Said She Said about him. However, his image from Easy Rider also depended on him, so that he could hardly free himself from the role of the rebel.

In 1971 Fonda first directed the western drama Der weite Ritt , in which he also took on the lead role. As a director, Peter Fonda remained loyal to New Hollywood , but was unable to build on the success of Easy Rider - his two other directorial works Expedition in the Future (1973) and Wanda Nevada (1979) never achieved such a status. Fonda also starred in other directors' films in the 1970s to finance his own projects. Probably the most successful of these was Kesse Mary - Mad Larry (1974), in which he played the role of a racing driver turned criminal out of financial difficulties. After the end of New Hollywood cinema in the early 1980s, Fonda was no longer able to finance his own film projects and he was also less in demand as an actor. In 1983 he played a friendly American soldier in Germany under the direction of Marianne Rosenbaum in Peppermint Frieden , who made friends with Bavarian village children after the end of World War II. Fonda appeared in many second rate films, but was also more concerned with his Montana ranch and children. 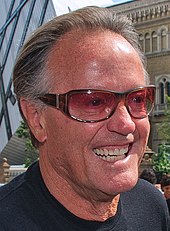 Peter Fonda made another comeback as an actor from the mid-1990s . In 1998, he received an Academy Award nomination for best actor for the role of a widowed bartender in the drama Ulee's Gold . He also won two Golden Globes , in 1998 for Ulee's Gold and in 2000 for a supporting role in the television film The Passion of Ayn Rand , a television biography of Ayn Rand's life . His name has been on the Hollywood Walk of Fame since 2003 . In 2004, he voiced the character The Truth in the video game Grand Theft Auto: San Andreas . In 2007 he played in two successful action films: In Death Train to Yuma , he played a western villain, in Ghost Rider the role of Mephistopheles . Also in 2007, based on his role in Easy Rider , he made a self-deprecating appearance in the road movie Born to be Wild . Peter Fonda was in front of the camera until shortly before his death, the war film The Last Full Measure , in which he played a veteran of the Vietnam War , was released posthumously .

From the Fonda family, Peter's sister Jane and his daughter Bridget also became known as film actresses. Peter Fonda described the relationship with his famous father Henry as not always easy because he was distant and the children found it difficult to live up to his expectations. Frances Seymour, the mother of Peter and Jane Fonda, died of suicide in April 1950 , a few months after learning that Henry Fonda was about to divorce her.

Fonda was also repeatedly involved in politics and environmental protection, for example he produced the documentary The Big Fix together with filmmaker Tim Robbins . This addresses the role of the oil company BP in the 2010 oil spill in the Gulf of Mexico and also criticizes the actions of the then US President Barack Obama , whom Fonda described as a “traitor”. On Twitter , Fonda also criticized Donald Trump's policies , but was also criticized when he wrote - alluding to Donald Trump's asylum policy and the separation of Mexican children from their parents - that Trump's youngest son Barron (* 2006) wrested from his mother and put in a "cage full of pedophiles". Fonda later apologized for the tweet.

Peter Fonda had two children and was married three times: from 1961 to divorce in 1974 with Susan Jane Brewer, from 1975 to divorce in 2011 with Portia Rebecca Crockett and since 2011 with Margaret DeVogelaere. He published his autobiography Don't Tell Me Dad in 1998. Fonda last lived on a ranch in Paradise Valley , Montana , and in Los Angeles, where he died of lung cancer in August 2019 at the age of 79 .