An autopsy ( Latin obductio , from obducere : 'to cover', retrospectively 'to bring in ' or 'to present') is an internal examination ( opening of the body ) to determine the cause of death and to reconstruct the process of death . This type of inquest is of pathologists and coroners ( forensic performed), with them Section Expert (in Austria: Prosekturgehilfen ) assist. The person performing an autopsy is called an autopsy .

The term autopsy is usually used for clinical ( pathological ) sections and forensic sections.

Clinical autopsies are almost exclusively performed by a pathologist . This usually works with a medical taxidermist (medical dissection and dissection assistant or prosecution assistant ). Here are the cause of death and the medical history of a deceased person by internal medical inquest found. Usually the last doctor treating the deceased applies for an autopsy. The prerequisites for a clinical dissection are that the deceased or the next of kin give their consent and that death has occurred from a natural cause (e.g. heart attack , cancer , pneumonia ). There is the possibility of a partial autopsy at the request of the relatives. In such cases z. For example, the brain is not removed, which means that no cuts can be seen in public laying out. A good cosmetic result can also be achieved in the head area through an adapted cut. Such a procedure is not possible in forensic medicine, since the scope of §89 StPO is specified here. It is not only used for quality assurance in medicine, but can also be a relief for relatives (e.g. self-reproach for not noticing symptoms in time). Furthermore, an autopsy can occasionally provide indications of familial risk factors (e.g. cancer or hereditary diseases ). It is sometimes used for insurance issues (e.g. occupational illnesses that may have contributed to death, as well as concealed previous illnesses). Last but not least, it serves for the advanced training of doctors and medical professions in hospitals.

Forensic autopsies can be ordered by the public prosecutor or by a court if a non-natural cause of death, i.e. a homicide , suicide or accidental death , is suspected or established and further clarification appears necessary. If the type of death is documented on the death certificate as "unclear", a section ordered by the court is usually also carried out. The legal basis for both the autopsy and exhumation (excavation) in Germany is Section 87 (ff) of the Code of Criminal Procedure (Section 159 in conjunction with Sections 87 ff. StPO). These sections must be carried out by two doctors, one of whom is a specialist in forensic medicine in the practice.

Pathological and forensic sections are very similar in procedure. In the case of pathological autopsies, however, a toxicological examination is dispensed with, as this was generally carried out before death. The determination of the body temperature of the deceased, which allows conclusions to be drawn about the time of death, is also omitted. However, differences can be observed in the details of the cut. So z. B. in forensic medicine the soft tissues of the neck are prepared in an artificial hemorrhage.

Depending on the cause of death and the complexity, an autopsy usually takes two to three hours, but no more than four hours.

An autopsy in forensic medicine costs around 950 euros in Germany. An examinations ordered by a court are rewarded with an expert remuneration of 850 euros. The costs of a section are mostly borne by the public purse, since the status of the insured person in the statutory health insurance is extinguished upon death. A section that is only requested by relatives must be paid for.

In Germany, around one to two percent of the dead are autopsied. There is evidence that suggests that a significant proportion of the clinically suspected causes of death are false. A study published in the Archive for Criminology in 1997 came to the conclusion that of the approximately 900,000 deaths in Germany, around 11,000 non-natural deaths and 1,200 homicides are not recognized each year.

Anatomical sections ("dissections") are used to train medical professionals; Anatomists and students do it together. The deceased to be dissected usually made their corpse available voluntarily for this purpose during their lifetime, unless they were animal carcasses for study purposes. The term autopsy is not normally used in this context; instead, one speaks of dissection (formerly also dissection ) or the preparation of corpses. The term preparation is also used for the preservation of corpses and parts of corpses.

An anatomical section is much more detailed. It is not limited to the three body cavities (see below), smaller details are also shown, as all anatomical structures of the body are to be learned during the dissection course . Therefore, an anatomical dissection takes a whole semester or at least a few weeks. Hence the need to embalm the corpse. A restoration of the body is then no longer possible. In the end, the corpse is mostly buried individually and (largely) completely. However, there are also group burials where all corpses and parts of a course are buried together. This is done anonymously or by name, depending on the last will, by cremation or burial. However, particularly successful specimens are kept for longer, often for many years or decades, for teaching purposes and are only buried later and therefore usually separate from the rest of the body.

An autopsy begins with a close inspection of the body . Height, weight, nutritional status and skin color are recorded. The location and color of the dead spots as well as the degree of rigor mortis are documented. Skin changes such as scars, wounds, surgical wounds, pigment spots, tattoos and the like are also described. Particularly in forensic autopsies, great importance is attached to a precise external description which, in addition to any injuries (such as gunshot or stab wounds), also includes clothing and other items (e.g. jewelry, wristwatch, etc.). The examination of clothing, effects , body size and dental status is particularly important for the identification of unknown dead. In addition, conclusions about external influences etc. can be drawn from the external inspection.

The internal coroner is divided into an opening in the cranial, thoracic and abdominal cavities. During the autopsy ordered by the court, all three body cavities ( cranial cavity , chest cavity and abdominal cavity ) of the deceased must be opened in accordance with Section 89 StPO , thus exposing the organs. The organs are assessed according to size, shape, color, consistency and coherence, with changes deviating from the norm being recorded in the descriptive part of the autopsy report. Morphologically visible organ changes have a correspondence in pathological-anatomical diagnoses, which in turn correspond to certain clinical symptoms. The preparation technique is adapted to the clinical findings submitted. So with certain previous findings a representation of z. B. leg vessels are necessary. Small samples of important organs are preserved for further light microscopic and possibly also microbiological investigations. For forensic medical reports, the blood and urine of the deceased are also obtained for the purpose of toxicological tests.

The Y or T cut

This cut has either the Y- shape, here the cut is made from both collarbones at an angle to the breastbone and from there straight to the pubic bone. Alternatively, a slightly curved cut is made from shoulder to shoulder across and then in a second cut centrally down to the pubic bone, the T- cut . Through these incisions, the pathologist or forensic doctor can access all organs in the chest and abdomen (after removing the sternum and the adjacent ribs).

Following the internal inspection, the organs are placed back in the body cavities of the deceased, whereby the removed organs or parts of organs can be processed and archived for clinical or scientific purposes. If larger amounts of tissue are missing as a result, these z. B. replaced by pulp in order to approximately restore the external shape of the body. The skin incisions are roughly sutured and the body washed. This makes it possible to say goodbye at the open coffin .

The samples obtained are later examined microscopically and microbiologically . In a judicial section, drugs and possibly toxins and drug levels are toxicologically determined. Occasionally, special examinations such as DNA analyzes , entomological (insect-related) and radiological procedures are also used. The various reports are only sent to the section's client.

The autopsy report consists of a descriptive part that leaves no room for interpretation and is essentially related to an image description. As a result, the descriptive part is an objective description of the organ systems, which ideally should be so precise that an expert can read out all pathological-anatomical diagnoses from the report and, if necessary, revise them. A list of the causes of death and the individual pathological-anatomical diagnoses is attached to this description. 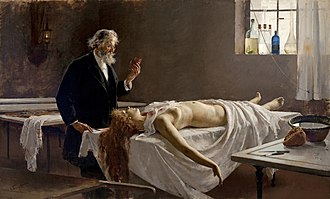 As early as the 12th and 13th centuries, corpses were occasionally opened in Europe to determine the cause of death . In 1286 a doctor in Cremona found the same pathological change in the heart as in the examined chickens during the dissection of a person who died during an epidemic. The first demonstrable teaching sections concerning human anatomy took place around 1300 in Bologna, in 1391 by Mondino dei Luzzi , in Padua in 1341, in Montpellier in 1366 and in Lérida in 1391. Also that for Charles VI. The surgeon Valescus de Taranta, who worked in France , came from Portugal and worked as a professor in Montpellier and a doctor in Bordeaux, conducted sections himself around 1400, the findings of which he published in a textbook. In the Renaissance in the 15th and 16th centuries, autopsies (sections) were increasingly carried out to gain anatomical knowledge. The clinical autopsy as a prerequisite for the systematic description and recording of clinical pictures then gained in importance from the middle of the 19th century through the combination of macroscopy and microscopy. In 1535 Burghard Mithobius (1501–1564) and Johannes Dryander were pioneers of the anatomical section in the German-speaking area , but even before 1530 "anatomies" were carried out in Germany.

In Germany, the section is only regulated in the federal states of Berlin and Hamburg in separate section laws. The funeral laws of some other federal states also contain regulations on the section, e.g. B. in Brandenburg and North Rhine-Westphalia .

Under the impression of the violent death of the two-year-old Kevin, who was beaten to death by his stepfather and kept in a refrigerator, the Bremen Senate decided in 2009 that an autopsy should be carried out regardless of suspicion in the unexplained death of children under six years of age. The regulation, which came into force in 2011, aims to clear up possible abuse. The law was de facto not implemented - the child autopsy rate remained unchanged. Critics complain that the regulation also clearly does not cover violent deaths and, for example, represents an additional burden for parents in the case of children who have died due to illness.

If there is a suspicion of an epidemic hygiene-relevant issue (for example: open TBC), the health department can order a medical police section.

The churches in Germany consider autopsies to be an act of charity, as they serve the common good.