The death certificate, also known as a death certificate or corpse certificate ( L-Schein ), is a public document in Germany in which a doctor, after a thorough examination of a human body, certifies the death of this person with personal details and time and place of death , if possible stating a cause of death and the type of death noted, i.e. whether it was a natural or unnatural death ( examination of the corpse ). For stillbirths with a birth weight of 500 g or more, a death certificate must be issued. The structure of the form and the type of information to be noted in it vary slightly in the individual federal states. This is because the Funeral Act is a state and not a federal matter ( federalism ).

It is not to be confused with the civil death certificate .

In Germany, more than 850,000 death certificates are issued every year. 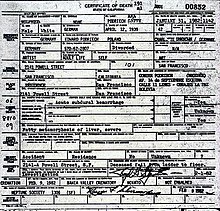 Death certificate from the canton of Basel , Switzerland (2018)

The use of the confidential part varies significantly from state to state. In most cases, the death certificate is sent to the health department and the crematorium in the event of a cremation and, in the case of an "unnatural" type of death, to forensic medicine in advance and then to the public prosecutor for clearance.

The non-confidential part of the corpse certificate and the findings documented in it are the basis for decisions by registrars to certify the death (also for the extension and reduction of the funeral period) and the issuance of a death certificate . In addition, the death certificate is also evaluated for the population statistics, namely the cause of death statistics .

The cause of death statistics are used in health policy and in the health economy for decisions about investments in preventive and curative measures. Studies from 1987 and 2019 show, however, that death certificates are often incorrectly issued. Often the statement "cardiovascular failure" does not provide any indication of its cause; Infectious diseases, for example, often go undetected. In Germany, the information provided by doctors has to be converted into ICD codes by the statistical authorities of the federal states, although this practice varies from one state to another, which further distorts the statistics.

In some federal states, an additional clearance by the police is required for clearance for cremation and in all federal states except Bavaria a second examination of the corpse must be carried out by a medical officer in the crematorium.

In some federal states (e.g. Rhineland-Palatinate, Saarland and Saxony) emergency doctors only issue a temporary death certificate. The nearest resident doctor who can be reached is obliged to examine the corpse and issue the final death certificate.

In most cases, the medical fees for the death certificate are disbursed by the funeral home. The death certificate is subject to the fee schedule for doctors (GOÄ). Item 100 GOÄ includes the examination of a dead person including the determination of death and issuing of the corpse certificate according to GOÄ B VII. In addition to item 100, a road allowance according to § 8 with night surcharge GOÄ can be claimed; it depends on the distance (one way). Travel compensation according to § 9 GOÄ will be charged for distances over 25 km.

According to current case law, the additional billing of a home visit to carry out the inquest is no longer permitted since 1998. The current GOÄ, which has been valid since 1996, does not contain any further regulations.

Funeral law is state law, but is subject to the Federal Funeral Ordinance.