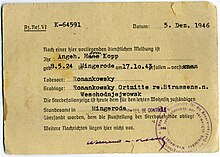 Death notification of Hermann Kopp, who died on the Eastern Front in 1943.

A death (depending on the context, also death , inheritance ) is the occurrence of the death of a specific person.

Next to it is ordering groundwork for the bereaved sense. All documents that are important in the event of serious illness and death are kept close to one another:

For each contractual partner, in particular the address and the business or file number are necessary, often also a note on what to do.

Even very personal matters can be settled during your lifetime. This includes storing a contact list with the contact details of the people who should be notified in the event of death. This can include relatives, friends and acquaintances of the author. A note on who should be invited to the funeral service can also be added. A funeral directive can also be useful. Especially if the deceased has requested a cremation or an alternative burial, a written burial decree is required in order to be able to prove this will. For the bereaved, this has the advantage that they do not have to worry about the wishes of the loved one. Funeral directives are available as pre-printed forms.

Duties of the bereaved

The following is often observed in Germany (other countries sometimes have significantly different procedures):

Depending on what the external post-mortem examination of the unclothed deceased person accomplishes on the spot or in the institute, the type of death and the mostly suspected cause of death are entered in the death certificate. In any case, a (usually only bureaucratic) investigation of death is carried out by the responsible department of the State Criminal Police Office and the public prosecutor's office . This can also order the autopsy (section) of the corpse. Every adult citizen is obliged to identify corpses.

The death certificate is issued by the registry office that is responsible for the place of death. In the event of death in aircraft, on ships and during a train journey, special provisions apply. It is advisable to apply for several copies of the death certificate. The death certificate, it must identity card of the deceased and the recent civil document to be submitted, depending on marital status , either the birth certificate or the marriage certificate (the family register ). Home and hospital managers are required to report to the registry office in the event of death in the facility, otherwise co-residents of the household in which the deceased died ( Sections 28 to 30 of the Civil Status Act ).

The employer / pension provider and the relatives and friends of the deceased must be notified, often landlords, pastors, other authorities, the health insurance company and also insurance companies. Before a life insurance policy is paid out, an internal investigation, i.e. an autopsy , is often also requested, if this is not done anyway at the request of the relatives or by order of the public prosecutor . There may be other things to consider such as phone, subscriptions, travel or scheduled appointments. Anyone who finds or keeps a will is obliged to hand it over to the probate court (a department of the local court) at the last place of residence of the deceased when the death becomes known ( Section 2259 BGB). The will is officially opened there. Banks are obliged to transmit the account balances of deceased bank customers to the tax office if the value of the assets to be displayed exceeds EUR 4,999.99. The heirs are obliged to submit an inheritance tax return.

The burial obligation is the responsibility of those responsible for the care of the dead (not the heirs, they are only obliged to pay for the funeral, § 1968 BGB). Those liable to be buried are regulated in the federal state burial laws; as a rule, it is the spouse and immediate relatives . If they do not take care of it, the local public order office has to arrange the funeral, which charges the costs mentioned above.

An undertaker can be entrusted with many tasks in the event of a death, for example the transfer of the dead, the hygienic care and coffin of the deceased, the acquisition of the grave via the cemetery administration , as well as the entire organization of the funeral service and burial . Also with the funeral meal , newspaper advertisements and information from health insurers and insurance companies . Any such service will be billed to the surviving dependents.

About six weeks after the burial , the grave should be cleared and grave maintenance organized.

With the death of man, the so-called. Inheritance that occurs succession one. This means that all assets and debts become the property of the heirs. A distinction is made between legal and voluntary succession. To prove the inheritance you usually need a certificate of inheritance, which you can apply to the probate court. The heir is also obliged to submit the inheritance tax return. If you do not want to pay for debts of the deceased (testator), you have to expressly refuse the inheritance at the probate court . Some other measures can also limit liability for debts of the testator. See under inheritance law . Rights to draw from life insurances (and other investments) in the event of the death of the insured person / account holder are gifts , not inheritances.

The tenancy does not end with the death of the tenant. The heir can enter into the rental agreement or terminate it within one month with the statutory three-month notice period ( Section 564 BGB) and dissolve the household . Priority over the heir are the spouse and partner as well as the children of the deceased tenant ( § 563 BGB) as well as other co-tenants thereafter ( housemates , § 563a BGB).