The following important information is missing from this article or section:
This article applies to people only. There is no evidence of the causes of death of other living beings.
Help Wikipedia by researching and pasting it .

The cause of death is the cause of the occurrence of dying and death . Depending on the perspective, the term can be defined differently. Causes of death in a broader sense include events and circumstances that can result in death. In the field of medicine, specific illnesses or external acts of violence are named as causes of death.

The term type of death refers to the distinction between the causes of death in three categories: natural , not natural, or unexplained .

Determination of the cause of death

The determination of death in humans is a matter for doctors. The technical term for this is morgue , this is carried out in Germany by a licensed physician. In the death certificate (death certificate, corpse certificate), the cause of death is indicated as far as possible.

If no natural cause of death is determined (i.e. unnatural or unclear cause), the public prosecutor decides on how to proceed ( death investigation procedure ). Usually an autopsy by a forensic doctor follows . The determination of the exact cause of death by the autopsy also enables an important quality control with regard to the previous diagnosis and therapy .

Particularly in the case of unexpected deaths, it should be investigated which illness or violence caused the death.

Within the process of dying, another complication can ultimately lead to death without, from a medical point of view, triggering the dying process, in which more and more organ systems irreversibly cease to function. For example, if someone with fatal cancer last died of pneumonia, the cancer is considered to be the (causative) cause of death. In people with multiple illnesses ( multimorbidity ), it is often not easy to determine the decisive cause of death and the sequence of conditions that led to it. This can be of decisive legal importance in the case of insurance cases, violent deaths or medical malpractice, but also in the case of so-called "late death" after an accident. The event that ultimately led to death could have been weeks or years ago. Example: traumatic brain damage → dementia and bed restraint → pulmonary embolism → late death; Conclusion: unnatural death from brain trauma .

The cause of death statistics are based on the medical death certificates. There, even if several illnesses leading to death are present, a single entry must be ticked as the cause of death.

According to estimates by the World Health Organization , the top twenty causes of death worldwide in 2016 were:

The most common causes of death at the beginning of the 21st century are coronary heart disease and stroke.

Jean Ziegler , the UN special rapporteur on the right to food from 2000 to 2008, estimated in 2007 that hunger or the consequences of malnutrition or malnutrition were the causes of death in around 30–40 million people , see also World Hunger .

About two thirds of all deaths are caused by old age diseases. In developed countries - including Germany - this ratio is even more extreme and can reach 90 percent.

In 2007, the annual number of deaths from smoking was estimated at 5.4 million. 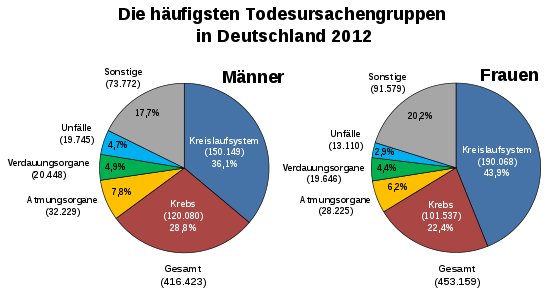 Cause of death groups in Germany in 2012 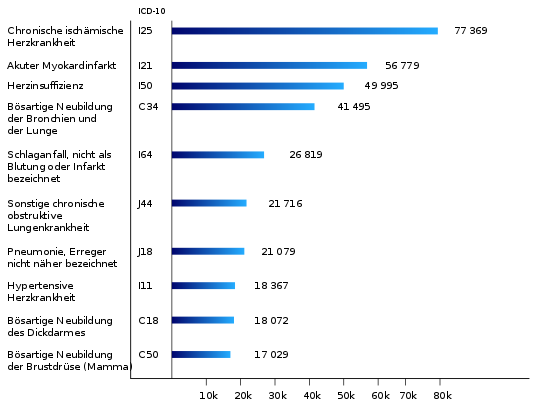 The most common unnatural causes of death:

The order of the most common causes of death differs further according to gender and age group, which can be considered separately (e.g. due to age-related diseases ).

In 2015, 67,606 people died in Switzerland, 6 percent more than in the previous year. The spring flu wave , the July heat wave and the aging population all contributed to this. The mortality rate and the potential years of life lost increased accordingly, and life expectancy at birth temporarily decreased. The most common causes of death are accidents and suicide between the ages of 15 and 40, cancer between the ages of 40 and 80 and cardiovascular diseases in those over 80. This emerges from the statistics on causes of death from the Federal Statistical Office . Overall, cancer was the leading cause of premature death in 2016. In 2017 1043 people have suicide committed and other 1,009 people to assisted suicide committed.

The statistics usually relate to live births, so miscarriages and stillbirths are not recorded. Infections, malformations, insufficient care or abortions of unborn babies are therefore not listed as causes of death in the official statistics.

The more common cause of death is not illegal, but legal drugs . In Germany, the number of drug deaths from illegal drugs has fallen from around 2000 to around 1300 (in 2018) since the beginning of the millennium.

The number of deaths as a result of alcohol abuse was given in the reports of the drug commissioner of the federal government 2002 to 2008 with "over 40,000 people". Since the report from 2009 (up to and including 2012), more recent calculations have given significantly higher numbers, according to which “over 73,000 people die as a result of their alcohol abuse”. The most common alcohol-related cause of death is alcoholic cirrhosis of the liver . Men are three times more likely to die from alcohol abuse than women.

In the wake of the US drug crisis in 2016, overdoses overtook heart disease as the leading cause of death among those under 55.

Cause of death war service

During the Second World War, up to half of a cohort of German men perished in individual cohorts. In the post-war population, the number of surviving men tends to die earlier than would be expected in a population unaffected by war. Injuries, psychological stress, malnutrition or health hazards from combat operations shorten the life expectancy of survivors. However, since these men reach 50 and more years of life and only then die increasingly, this change in the health situation of those affected by the war does not have an impact immediately after the end of the war.

In a study of the Germans who survived both world wars, it was found that the male adolescents at the end of the war later had a significantly higher mortality in the middle age groups. This is not evident in German women. Something similar can be observed, but not to the same extent, in the other warring countries of both world wars. This is explained by the fact that the blood vessel structures are impaired by malnutrition, but this only has an effect in the age groups in which cardiovascular diseases are the most common cause of death. This affects young people most at the end of the war, as undernourishment in the last years of growth cannot be compensated for later, as is the case with smaller children. That this only affects men is explained by the fact that women can store more fat.

The list below contains examples of unnatural causes of death.