Railways are track-bound means of transport or transport and an important part of the transport infrastructure . They are track-bound by running on or under one or two guardrails ( single and double rail, funicular , suspension railway ), floating above or below a magnetic field ( magnetic levitation train ), rolling on tensioned steel cables ( aerial cableway ) or an overhead line ( trackless railway ) consequences. Almost all vehicles traveling on guardrails have steel wheels with flanges or one flange each if they are traveling on two rails . Occasionally, trains with rubber-tyred wheels run on concrete lanes, such as on some lines of the Métro Paris , other Métros in France , the m2 line of the Métro Lausanne , the Metro Montreal and the airport shuttle in Frankfurt . In these railways, the rails only have the function of tracking.

Most railways are used to provide transport services, but there are also railways that the game or. serve for recreational enjoyment (for example roller coasters , ghost trains and rides ).

Most of the track-bound railways are the railways that use the wheel-rail system . They are also known as rail transport systems, the vehicles as rail vehicles. These either have their own traction drive ( railcars ) or are pulled or pushed by a locomotive . Rarer special cases of mechanically guided systems are overhead monorails and systems in which the vehicles do not have their own drive but are moved by a stationary motor, for example cable cars . Magnetically guided are z. B. Magnetic levitation trains.

Steam locomotive of the type A1 of British LNER

The most widespread are railroads on two steel rails. They serve the public persons - near - and long-distance and / or freight . They are divided into main and secondary lines according to their importance and the technical conditions . Railways are mainly operated by state, but also by private railway companies. For goods traffic, there are also non-public railways ( works railways ): connecting railways connect a company with the public rail network, while mine and field railways are used for internal traffic.

According to their gauge, a distinction is made between standard gauge (1435 mm), narrow gauge (e.g. meter gauge with 1000 mm) and broad gauge railways (in Spain, Portugal, Finland, Russia, Belarus, Mongolia and Ukraine). The passenger trains are divided into long-distance and local trains according to the distance and duration of the journey .

It is essential to define a "railway" in Germany, the legal separation from other rail operators, especially the road , city and underground trains that make up each different legislation for the operation result:

Long-distance trains only stop at heavily frequented large train stations and connect large cities. In Germany these are Intercity (IC), Eurocity (EC) and also high-speed trains such as ICE and TGV . Furthermore, these are private long-distance trains such as B. the Harz-Berlin-Express and formerly the Interconnex , the Hamburg-Cologne-Express and the Vogtland-Express .

The regional transport opens up the region. The regional trains (RB) stop outside the S-Bahn network at every station, the regional express trains (RE) only stop at busy stations.
The Interregio-Express (IRE) stops only at selected stations and partly from the local rail transport authorities ordered (eg Baden-Wurttemberg ), partially operated, however, without financial assistance (for example, on the route Berlin - Hamburg). This is comparable to supra-regional connections by private railway companies , such as the Hamburg-Cologne Express , which also operates as a local train.

Train of the Vienna S-Bahn at the former Südbahnhof

The Stadtschnellbahn, or S-Bahn for short , is used for local passenger transport in metropolitan areas and usually runs at frequent fixed intervals on its own tracks next to the main lines or in tunnels through the city ​​center . Outside the core network, they operate in mixed traffic with regional, long-distance and freight traffic. Berlin and Hamburg have separate S-Bahn networks in which the power supply is generated via busbars on the side with direct current (800 volts and 1200 volts, respectively). The Hamburger S-trains to Stade about Buxtehude are two-system - multiple units , the outside of the direct current power supply with traction power 15 kV, 16.7 Hz from the overhead line to be supplied.

In all other city regions such as Munich , Stuttgart , Frankfurt , Cologne-Düsseldorf-Ruhr area , Hanover , Nuremberg , Dresden and Central Germany , the S-Bahn trains run on their own tracks on the core routes, otherwise together with the regional and long-distance trains and receive alternating current (Traction current 15 kV, 16.7 Hz) from the overhead line.

Legally, the S-Bahn are considered to be classic railways.

Mountain railways transport people - mostly tourists - or goods from the valley to a mountain or vice versa. They use cog railways or cable cars that are separate from the normal railway network. Cable cars can either run as funiculars on the surface of the earth or as aerial cableways . The cogwheel train transmits its driving force to the rail with a gearwheel . In the Fell locomotive , the drive force is transmitted to a center rail by its own friction wheels with increased contact pressure.

Other railways - including rack and pinion railways - that run in the mountains are called mountain railways . They are main or branch lines that are part of a larger railway system.

Local railways that are not part of the railways:

Trams are public railways that are not part of the main and branch lines or the mountain railways. They are used for local transport, especially in large cities, and are usually operated by municipal or private companies. Almost all trams today are operated electrically. In the 19th century there were numerous horse and steam trams . Classic trams run on the road or on a special track in the street area. Tram drivers mostly drive on sight, so the vehicles must have very effective brakes . Signal systems are used on the company's own railway tracks, on which higher speeds may be permitted, or in tunnels .

In Germany, the ordinance on the construction and operation of trams (BOStrab) applies to trams in contrast to railway operations .

Cable ducts are trams, which are drawn from a fixed drive to a cable, such as cable cars in San Francisco . Technically, they are a special type of funicular . 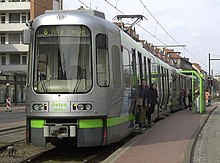 Light rail (including light rail , fr. : Métro léger, Pré-Metro (Metro-forward mode), Dutch. : Sneltram) called developed trams, whose network largely independent of the road and usually a separate track have. In the city center they partly run in tunnels . The networks are often provided with the logo of the U-Bahn (e.g. in Stuttgart and Hanover ), in Karlsruhe the S-Bahn. In some cities only the underground stations have the subway logo ( Cologne ). The trams are also subject to the BOStrab.

Underground trains (metros) are used for local passenger transport in large cities, are operated electrically with direct current (mostly from busbars) and have only independent railway bodies , often in tunnels, also on embankments or viaducts as elevated railways , in cuts or at ground level. The subway operation is secured by signal systems. Since they i. d. As a rule, if they do not have any level crossings with roads, they are independent of road traffic, but still legally count as trams. They are usually operated by transport companies that are (still) in municipal ownership. Pure subways in Germany have Berlin , Hamburg (directly connected to the Norderstedt subway , which is also operated by the Hamburger Hochbahn ), Munich and Nuremberg . In addition, there are also U-Bahn-moderately developed light rail lines (U4 Stadtbahn Frankfurt (until 2009), U18 Stadtbahn Essen ). Legally, in Germany, the underground is a tram, as opposed to the railway. The BOStrab applies here.

Monorails are (mostly) also used for public transport, whose vehicles drive on or under a single narrow track.

In the case of overhead conveyors , the vehicle is under a support rail. The famous 13 kilometer long Wuppertal suspension railway runs largely over the river Wupper and was put into operation in 1901. Younger are the H-Bahn in Dortmund and the Sky-Train in Düsseldorf, which are automatic, driverless systems.

In the case of saddle railways, the vehicle is above the driveway. The vehicle here includes the support body. These include the Alwegbahn and magnetic levitation trains such as the Transrapid .

Vehicles in some rides at fairs and amusement parks , for example roller coasters or ghost trains, also run on rails . They are known as railways and also transport people, but have no transport function because they always bring their passengers back to the starting point. Its purpose is to enjoy the ride itself, or rather the thrill . Also serve toy trains and model trains not the passenger.

For the transport of goods within buildings, there are various rail conveyor systems that are designed for automatic transport.

Portal: Bahn  - Overview of Wikipedia content on the subject of railways

Portal: U-Bahn  - Overview of Wikipedia content on the subject of U-Bahn

Portal: Tram  - Overview of Wikipedia content on the subject of trams