The title of this article is ambiguous. Further meanings are listed under brake (disambiguation) . 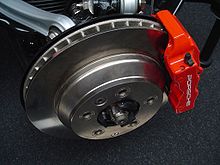 Brakes are used to reduce or limit the speed of moving machine parts or vehicles . They usually work by converting the supplied kinetic energy through friction in heat energy . In contrast to regenerative braking , the kinetic energy for locomotion is lost. As a machine element, brakes are closely related to clutches ; the brake is a special clutch in which one side is stationary. In this respect, many types of brakes can be derived from clutches. Vehicles within the meaning of the StVZO must have a dual-circuit brake system in Germany , i.e. two brakes that function independently of one another.

By far the most frequently used types of brakes in vehicles are the disc brakes and the drum brakes , a further developed form of the block brake . Most often a brake is used to reduce the speed of rotation of rotating parts. But many of the principles listed can also be used to reduce linear movement, even if the construction methods differ somewhat.

In some cases, the type of brake actuation is also used for categorization. However, the designation compressed air brake , hydraulic brake or cable brake , for example , does not say anything about the design, but only indicates the type of power transmission to the mechanical control elements.

The braking power depends on the braking force and the instantaneous speed and is completely converted into heat.

Speed ​​between the friction bodies in

Physically, a brake is used to convert the kinetic energy ( ) of a physical mass ( m ) that has been braked (or decelerated) by the speed difference ( ) into thermal energy. It should be noted that the speed is included in the calculation as a square:

Thermal bonding occurs as a result of the specific heat capacity . The thermal radiation has a cooling effect according to the Stefan-Boltzmann law , the thermal convection by airflow or blowers with variable heat transfer coefficients and the heat conduction through the connecting elements ( conduction ).

The main article Brake disc contains an example calculation for the heating of a disc brake .

Front drum brake of a motorcycle

All mechanical brakes are grinding brakes and are based on reducing a movement through friction between a fixed and the moving body.

The principle of the scratch brake has been known since the earliest days. A lever is attached or clamped to a vehicle in such a way that the (if possible) shorter section points to the ground and the longer section to the operator. By pulling the brake lever , the short lower end is pressed into the ground using leverage and thus brakes the vehicle. This technique was widespread for a long time and is still used today, e.g. B. in sleds, sports equipment or children's vehicles.

The drag shoe is a primitive form of the block brake. 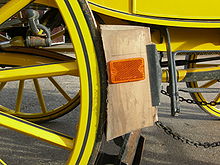 Block brake with a new brake block on a historic stagecoach

The vast majority of all brakes used in land vehicles in the 20th century can be assigned to the block brake principle . Spindle brakes on historic carriages, for example, have brake blocks made of limewood.

The shoe brake is a mechanical brake in which a rotating cylinder is braked from the outside by pressed brake linings .

The drum brake has a cylindrical circumferential housing (drum) against which stationary brake shoes located inside or outside are pressed when braking . The brake shoes are usually actuated via a hydraulic cylinder inside the drum or via rotating eccentric bolts from the outside. Depending on the design, a distinction is made between other types of construction.

The disc brake comprises a on the shaft follower brake disk on to which the brake pads are pressed on both sides. Such brakes can be found today on all common vehicles such as cars , trucks , motorcycles , bicycles and also on trains .

Ua in brake motors provide electromagnets which attract a spring-loaded brake disc of soft iron, for the release of the brake. With some brake motors, the magnetic field of the motor itself is used to release the brake or the DC voltage for releasing the brake is obtained from the operating voltage with a rectifier.

A sub-category of the disc brake is the oil bath brake (often also referred to as "wet brake"). Here one (or more brake disks) (separated by intermediate disks) rotates in an oil bath which are braked by friction with the pressure plate, friction ring (outside) and the intermediate disks. The pressing is done by a pressure plate, which consists of two discs. Balls are placed between the plates in elongated, flatter depressions. By turning the two disks towards each other, which thereby move towards or away from each other, the contact pressure on the brake lining and intermediate disks is adjusted.

The oil is used to remove the thermal energy. The advantage of this system is that it is temperature-stable (no fading ) and very low-wear and therefore low-maintenance. In addition, no brake dust is formed . In the case of repairs, the usually high costs are disadvantageous. This type of brake is sometimes found in tractors and quads . The oil bath brake is related to the oil bath clutch, which is often used in motorcycles .

With the electronically controlled wedge brake (disc brake design), a small electric motor pushes a brake pad with a wedge-shaped back profile between the brake shoes and the brake disc.

With the conventional wedge brake (used in horse-drawn carriages ), the driver rams a wedge between the wheel and the wheel arch.

With magnetic rail brakes , a brake pad is pressed onto the rail on which the vehicle is traveling by magnetic force.

The band brake is also a mechanical brake, but in contrast to the shoe brake, a band is wrapped around a drum.

As a rule, centrifugal brakes do not directly reduce the number of revolutions, but limit the same. They work on the same principle as centrifugal clutches . A common application was to limit the reverse speed of the dial of telephones , the so-called number switch .

Track brakes are shunting technology in tracks at marshalling yards, i.e. H. built-in shunting equipment (RTE). They reduce the kinetic energy of the wagons running down the shunting hill. There are energy conversions through impacts, friction and electrodynamic operating principles on the wheelsets or buffers. The types are differentiated according to function and operating principle.

With certain rail vehicles (for example steam locomotives with Riggenbach counter pressure brakes ), aircraft and ships, the drive is switched or deflected in the opposite direction to brake. In aircraft, this is known as reverse thrust . The principle of reverse thrust is also used for braking in boats and ships.