The title of this article is ambiguous. Further meanings are listed under stumbling block (disambiguation) . 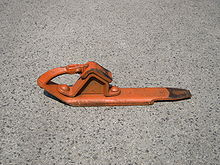 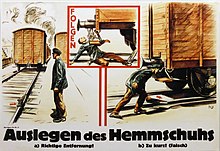 A drag shoe , also called brake shoe , wheel shoe or ramming shoe , is a device for braking vehicles . It is placed between the wheel and the floor or rail in order to brake the car through the resulting friction .

Obstacles on the railroad

Chocks are in shunting of railway cars used herein primarily in repelling and flow process . The drag shoe is made of metal. Its bottom must fit the profile of the rail on which it is to be used. For this reason there are several brake shoe shapes for the different rail profiles. The right drag shoe is identified by a specific color assigned to the shape of the rail head. Where which stumbling block may be used is regulated by the railway infrastructure manager and made known to the users of the infrastructure. A shoe that is too wide tends to tilt (“catch”) and, as a result, to eject the wheel (derailment). The drag shoe has a sole with a tongue that is flattened towards the tip and two guide strips attached to the side . The buck is attached to the sole with the cap and a handle.

Blocking shoes of the standard design are difficult to remove on inclined tracks above 2.5 ‰, because a wagon that is stopped with them does not roll back and release the blocking shoe. In such cases, the brake shoe is used for gradient stations with shortened guide rails. For these cases there are also anti-separation shoes, in which the buck can be separated from the sole with a trigger.

In adverse weather conditions, the drag shoe with a guided tip is used. The extended guide rails in connection with the particularly long sole prevent jumping off. But there are also drag shoes with only one guide bar, which is intended to prevent them from getting stuck in the core of a switch when it is accidentally pushed through and this can lead to the derailment of vehicles.

The drag shoe layer or pusher places the drag shoe in front of the rolling carriage on a rail of the track at a suitable distance from the point at which the carriage is to come to a stop - e.g. B. when running in front of other cars standing on the track or in front of a track closure . In order to avoid damage to vehicles and cargo, he must correctly assess the required braking distance, which requires a lot of experience. A wheel of the railway car to be stopped rolls over the tongue onto the sole and hits the trestle with the interchangeable cap attached to it. The wheel should not come to a standstill, but on the contrary continue to roll on the shoe sole and cap. The drag shoe can become very warm. Since the rolling wheel is rigidly connected to the wheel without sprags via the axle, flat spots on the wheel without sprags are prevented. The key to the best possible braking effect is to keep turning the wheel set. For this reason, drag shoes should not be placed on both rails. The braking effect with two brake shoes is considerably less. If, in particular, heavy wagons cannot be safely braked with a brake shoe, another brake shoe is placed in front of the second axle or the second bogie. There are bar lock shoes with an additional angle welded to the bracket for safe placement with the support bar.

In order to achieve an optimal function, the contact surface / braking surface of the brake shoe must be properly maintained. The sprag cap is lubricated to promote rollability. In winter, the shoe tongue is preheated with an open fire. In the case of smooth rail surfaces, for example due to hoar frost or ice, the tip of the drag shoe is sanded . Because the drag shoes are subject to heavy wear, especially when used on runoff mountains, they are regularly checked with the drag shoe gauge and, if tolerances are exceeded, they are separated out and processed.

If the drag shoe is used on runoff mountains to brake wagons without them coming to a standstill, a drag shoe release device with a catch pit is installed at the lower end of the rollerball. This device pulls the brake shoe sideways out of the wheel and the car rolls over the switch area to its destination. With the so-called Büssing brake or Büssing railway, the drag shoe is transported back to the placement point by conveyor belt after being ejected. A derailment of the wheel in the ejection area is prevented by a wheel guide on the other rail. However, in most of the routing systems that are used regularly, these drag brakes have been replaced by less labor-intensive and automation- capable track brakes (valley brakes). At some marshalling yards, the anti-slip devices were retained as a fall-back level even after valley brakes had been installed.

In some countries, wheel chocks may not be used as wheel chocks to fix (secure against movement) stationary vehicles; To protect parked locomotives from rolling or escaping vehicles, two blue drag shoes are placed in front of the locomotive to be protected at a safe distance.

Brake shoes were previously used on horse- drawn carriages . Since the braking effect of the sliding brakes that were common at the time, as well as the grip of the iron-tyred wagon wheels, was not enough to brake the wagon sufficiently on long steep stretches , the coachmen put a brake shoe attached to the axle or the long boom of the wagon in front of the right rear wheel to close the team brake. The right side was chosen to allow the coachman sitting on the right to see the shoe, the bare left rear wheel ensures that the carriage is guided on the road. To do this, the team must stop in front of the slope, then the drag shoe is placed in front of the right rear wheel and connected to the car with the chain; by pulling this wheel forward, this wheel rolls onto the drag shoe, whereby the chain tightens (and subsequently the drag shoe under the Wheel holds and prevents overflow) and the bolt to be inserted prevents the brake shoe from tipping sideways and thus becoming ineffective. The wheel in question no longer rolls with the brake shoe installed, but slips over the path with the brake shoe.

Modern carriages are predominantly equipped with disc brakes or drum brakes and rubberized wheel surfaces, the strong friction and braking effect of which make the stumbling block unnecessary.

Today, drivers of historic carriages with grinding brakes and iron-tyred wooden wheels mostly use the Wieland brake shoe , which was designed for asphalt roads , in which a wooden wedge, mostly made of birch wood, with a conical groove is inserted under the metal construction , which creates friction on the asphalt . On longer pass descents with heavy carriages, these wedges often have to be replaced several times.

The braking effect of the sprag on snowy or icy roads to ensure the so-called acts Eisreißer (also called " ice scraper "), which is wedged on the obstacle.

According to StVZO (§65, Paragraph 3), brake shoes may “only be used as additional aids and only if the vehicle cannot be braked adequately with an ordinary brake” .

Before steep inclines , there used to be signposted inhibition points where the driver had to inhibit, i.e. put in the brakes, as this was often no longer possible on slopes. Occasionally there are still signs or stone pillars, e.g. B. at Friedenfels in the Upper Palatinate (Steinwald), where there is a centuries-old column of cycling shoes on a steep mountain road, which makes descent without cycling shoes a criminal offense.

The Radschuhleiten , a group of the Schwarzenbach market town in the Wiener Neustadt-Land district in Lower Austria , is probably named after these historical braking aids.

"Inhibitor" as a phrase

The term "stumbling block" is used for something (or a person) that slows down, slows down or hampers a development. This usually has a negative connotation, but it can also be meant positively if the "stumbling block" protects another person from making a hasty decision.