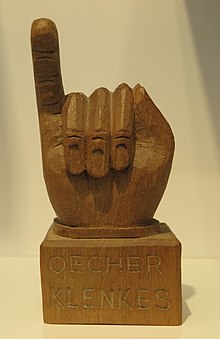 The Klenkes is the identification mark of Aacheners and greeting each other. It is the raised little finger of the right hand . A memorial by the Aachen sculptor Hubert Löneke on the Holzgraben has been commemorating the Klenkes since 1970 .

Aachen was known for its cloth industry and therefore also for its needle factories . The workers, mostly children, used their right little finger to sort out the needles. This activity, the "notching" of the faulty needles on the tape, led to malpositions and growth defects of the little finger in humans. As a result, Aachen residents could often recognize themselves in the distance by their malformed little fingers, even without words. In the course of time, the cloth industry increasingly lost its dominant role in the Aachen area . But the landmark of the Klenkes remained, for example the radio tower built in 1984 in the Aachen forest was given the official name Mulleklenkes , which in High German means something like speaking Klenkes.

An Aachen city ​​magazine , founded in 1975, is named after Klenkes and contains tips and dates about Aachen and the Euregio Meuse-Rhine. The newspaper was created as a so-called instead of the citizens' initiatives in Aachen. The Kölner VolksBlatt served as a model .