This article deals with the part of the hand, further meanings are listed under Finger (disambiguation) . 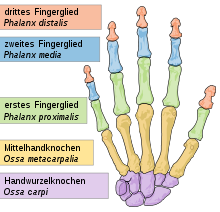 A finger - scientifically digitus (plural: digiti ) - is part of the hand . Fingers belong to the acra . A human finger has three bony supporting elements, the finger bones with the phalanx proximalis , media and distalis , base, middle and end phalanx , only the thumb has only two phalanges ( phalanx bones; from the Greek word phalanx for warriors' battle line; Mz: phalanges ). The phalanges are articulated in the middle and end joints and connect with the metacarpophalangeal joint to the corresponding metacarpal bones ( ossa metacarpi ). The thumb has a special position in humans, as its articulated suspension allows it to be in opposition to the other fingers. The movement of the fingers and the phalanges occurs through the tendons of the muscles in the area of ​​the forearm ("extrinsic muscles") and the metacarpus ("intrinsic muscles"), the fingers themselves have no muscles.

Almost all tetrapods have five fingers ( pentadactyle system ). "Initially" the fingers are still connected to one another by skins - the so-called interdigital skin (in animals: webbed skin ). Only with the regression of these intermediate membranes through apoptosis do the fingers acquire their "free-standing" shape. If this does not take place, cutaneous syndactyly occurs .

In addition to grasping, supporting and holding, fingers also have gestural functions, for example thumbs pointing upwards or downwards, outstretched middle finger , touching the thumb with the index finger , swiping fingers and so on. The counterpart to the fingers are the toes on the lower extremities .

Usually humans have five fingers on each hand in the following sequence:

Developmental features of the fingers

Polydactyly : Each hand has 6 fingers

Malformations of the fingers belong to the group of dysmelia . These include the development of redundant fingers ( polydactyly ), the absence of fingers ( oligodactyly , adactyly ), the lack of separation between fingers ( syndactyly ), the development of redundant fingers with a simultaneous lack of separation ( polysyndactyly ), shortening ( brachydactyly ) or lengthening ( Arachnodactyly ) of single fingers and the mutilation of fingers ( ectrodactyly ). There is also the flexion contracture of the middle joints of the little finger, more rarely also of the ring finger, camptodactyly and clinodactyly , a generally congenital lateral-angled kinking of a phalanx in the hand skeleton.

Men typically have a smaller index finger (2D) compared to the ring finger (4D) due to a higher testosterone influence during pregnancy. This finger length ratio (2D: 4D) is typically smaller in men. A small finger length ratio has been linked to various characteristics of a person, such as higher risk of alcohol addiction or video game addiction.