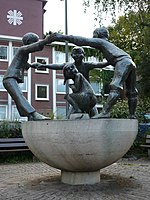 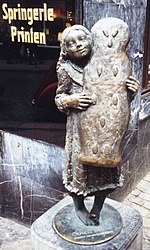 Krista Löneke-Kemmerling: The devil and the market woman

Löneke, who grew up in Beller, a district of Brakel in the Höxter district , attended the Düsseldorf Art Academy as a student in the master classes of the sculptors Zoltan Székessy and Ewald Mataré . Following his apprenticeship, Löneke initially worked mainly in Düsseldorf, but also accepted orders from other cities in North Rhine-Westphalia. Between 1958 and 1961, most of his works were included in the catalog of the Düsseldorf art exhibitions. Around the beginning of the sixties, Löneke moved to Aachen , where he initially set up his first studio in Annastraße 12a in the immediate vicinity of Aachen Cathedral . In addition, he worked as a typesetter and handicraft teacher in the special school service. A few years later, Löneke moved to the Aachener Pontstraße , where he worked well into old age.

Loneke had his most active and successful time in Aachen; numerous sculptures in the city area testify to his creative power. One of the first was the Türelüre-Lißje-Brunnen in Klappergasse (1967). In many of his works he was supported by his wife, the sculptor and graphic artist Krista Löneke-Kemmerling , who had also studied at the Düsseldorf Art Academy up to master class. For example, the sculpture Der Stelzenläufer (1983) and the bronze statues Der Teufel und die Marktfrau at the entrance to Lousberg (1985) in Aachen, but also the Platschhonk monument on the market square in Übach (1979) and the miners' monument in Palenberg (1989) come from her ).

The naturalistic execution of his sculptures is characteristic of Hubert Lönekes ’work, as can be seen in the portrait of the Aachen architect Ludwig Mies van der Rohe and the bust of John F. Kennedy in the Aachen Kennedy Park (near the pillars of the former Yellow Barracks ) recognize is. But typical Aachen characteristics, legends and circumstances are also the subject of his works, which are set up in various places in the city center, which critics certify a refreshing approach and discreet humor. Above all, his joy in working with children and their mischievous behavior becomes clear. The depictions of The Devil and the Market Woman and Türelüre-Lißche are based on Aachen legends. His bronze - plastic Klenkes on the Holzgraben dedicated to Klenkes , the traditional Aachen greeting the little finger raised. It has its origins in the Aachen needle industry, which dates back to the 16th century: the needles were sorted with this finger .

Lönekes ’oeuvre also includes abstract works. One of his areas of interest was the study of signs that relate the archaic elements of fire, water, earth and air.

Löneke was buried in the forest cemetery in Berlin-Dahlem in 2011 .