The Stefan-Boltzmann law is a physical law that specifies the thermally radiated power of an ideal black body as a function of its temperature . It is named after the physicists Josef Stefan and Ludwig Boltzmann . 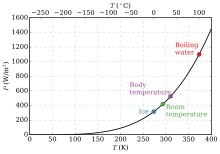 Increase in the emitted radiant power over temperature

Every body with a temperature above absolute zero gives off thermal radiation to its surroundings. A black body is an idealized body that can completely absorb all radiation hitting it (degree of absorption = 1). According to Kirchhoff's law of radiation , its emissivity  ε therefore also reaches the value 1, and it emits the maximum possible thermal power at the relevant temperature. The Stefan-Boltzmann law indicates which radiation power a black body of the surface and the absolute temperature emits. It reads in three spatial dimensions

with the Stefan-Boltzmann constant . The radiant power of a black body is proportional to the fourth power of its absolute temperature: doubling the temperature causes the radiated power to increase by a factor of 16. This law is therefore also known as "Boltzmann's T-to the fourth law".

The value of the Stefan-Boltzmann constant is

In this form, the Stefan-Boltzmann law applies to three-dimensional bodies, i.e. That is, the expansion of the body in all spatial directions is very much greater than the wavelengths of the electromagnetic radiation, the contribution of which to the overall performance is not negligibly small. If one of the dimensions of the body is much smaller than the relevant wavelengths, it is a two-dimensional body (surface), if two dimensions are very much smaller, it is a one-dimensional (rod).

In these cases the waves in the body cannot propagate in three dimensions, and so the total internal energy is smaller. Accordingly, the power emitted is also dependent on the dimension.

where is the Riemann zeta function and is also referred to as Apéry's constant , and

The radiated energy of a black body is generally proportional to the power of its absolute temperature, where the dimension of the body is.

The Stefan-Boltzmann law was discovered experimentally by Josef Stefan in 1879. In 1884, Boltzmann derived this radiation law from the laws of thermodynamics and classical Maxwellian electrodynamics . Based on one of the basic thermodynamic equations for a closed system in thermodynamic equilibrium :

one finds the expression taking into account the integrability condition

Maxwell showed as early as 1873 that the radiation pressure was

lets write. is the energy density of the electromagnetic radiation. Adolfo Bartoli was also able to thermodynamically justify the existence of a radiation pressure in 1876 by showing that in the event of nonexistence the second law of thermodynamics would be violated. The prefactor 1/3 only follows from electrodynamic considerations.

If you insert this expression for in the previous relationship and take into account that the entire energy in a volume can be written as , then integration follows

or for the entire energy

However, the constant of integration remains indefinite at first. It had to be determined through experiments, such as that of Joseph Stefan. It was only in quantum mechanics that it became apparent that this is a quantity composed of other natural constants . In 1900, 21 years after the Stefan-Boltzmann law, Max Planck discovered Planck 's law of radiation , named after him , from which the Stefan-Boltzmann law follows simply through integration over all directions and wavelengths . With the introduction of the quantum of action , Planck's law of radiation was also able to trace the Stefan-Boltzmann constant back to fundamental natural constants for the first time.

In older literature, the quantity is also referred to as the Stefan-Boltzman constant. The constant carried under this name by the CODATA stands above, however, the so-called radiation constant

in relationship; expressed in numbers:

The derivation is based on the spectral radiation density of a black body and integrates this over the entire half-space into which the surface element under consideration radiates as well as over all frequencies:

According to Lambert's law , the cosine factor takes into account the fact that when radiation is in any given direction through the angle and direction, only the projection of the surface perpendicular to this direction occurs as the effective beam surface. The term is a solid angle element .

Since the black body is basically a diffuse radiator and its spectral radiance is therefore independent of direction, the integral, carried out over the half-space, gives the value . For integration over the frequencies is

to be observed. If the specific radiation obtained in this way is also integrated over the radiating surface, the Stefan-Boltzmann law is obtained in the form given above.

For the one- and two-dimensional case, two other integrals have to be solved here. The following applies:

Here is the Riemann zeta function and the gamma function . Thus it follows for

and it follows for

These integrals are z. B. solved by skillful transformation or with the help of function theory .

The Stefan-Boltzmann law in the above form only applies to black bodies. If there is a non-black body that emits direction-independently (so-called Lambert radiator ) and whose emissivity has the same value for all frequencies (so-called gray body ), then is

the radiant power emitted by it. The emissivity is the weighted averaged emissivity over all wavelengths and the weighting function is the blackbody energy distribution. Scatters between 0.012 and 0.98 depending on the material . If the emissivity depends on the wavelength, the radiation distribution changes not only because of the change in the Planck distribution. Due to this additional temperature dependency, the total radiant power is no longer strictly proportional to the fourth power of the absolute temperature.

For a radiator in which the directional independence or the frequency independence of the emission is not given, the integral must be calculated individually on the basis of the relevant laws to determine the hemispherical total emissivity ε (T) . Many bodies deviate only slightly from the ideal Lambert radiator; if the emissivity varies only slightly in the frequency range in which the body emits a noticeable proportion of its radiation power, the Stefan-Boltzmann law can be applied at least approximately.

Comparison of the radiation behavior of the sun and a black body. The effective temperature of the sun is 5777 K.

Outside the earth's atmosphere at a distance from the sun to the earth, a surface facing the sun receives an irradiance of ( solar constant ). Determine the temperature of the sun's surface under the assumption that the sun is a black body in a sufficient approximation. The solar radius is the mean distance between the earth and the sun .

The radiant power emitted by the sun's surface penetrates a spherical shell of the radius with the radiation intensity , which is placed concentrically around the sun , and is therefore total ( luminosity of the sun). According to the Stefan-Boltzmann law, the temperature of the radiating surface is

The temperature of the sun's surface determined in this way is called the effective temperature . It is the temperature that a black body of the same size would have to have in order to emit the same radiation power as the sun.

The Stefan-Boltzmann law makes a statement about the total radiation power emitted by a black body at all frequencies. The division into individual frequencies or wavelengths is described by Planck's law of radiation .

The Wien's displacement law connects the temperature of a black body with the most radiated wavelength.