A magnet (from Middle High German magnets , "magnet, lodestone") is a body which has a magnetic field generated in its environment. In this field, certain other bodies are magnetically attracted or repelled. Magnetic attraction or repulsion is a fundamental natural phenomenon - see the article Magnetism .

Magnetic monopoles , i.e. individual north or south poles without their counterpart, are speculative in nature and have not yet been proven experimentally. It is true that recent experiments have shown monopole-like structures in certain solids; however, these only appear in pairs and can be regarded as sources of magnetization , but not of the magnetic field itself (see magnetic monopole ).

Many rocks also have magnetic properties. The earth's magnetic field , according to which compass needles align, is created only to a small extent by such magnetized rocks in the earth's crust and to a large extent by deeper-lying currents of electrically conductive matter, i.e. concrete, macroscopic currents.

A distinction is made between the following types of magnetism:

Before the connection between magnetism and electricity became known, magnetic phenomena and uses could only be observed and used with the help of natural magnetic iron stones. The practical application was exclusively for the compass . Its principle was already known in pre-Christian China and in ancient Greece. The magnetic iron stones were named after the Roman poet Lucretius ( De rerum natura ) after the Magnesia landscape in Greece, where these stones were found very early.

With Augustine the image of the magnet is still used allegorically. Medieval English theologian and naturalist Alexander Neckam published the earliest European record of the magnetization of compass needles around 1200, and Petrus Peregrinus de Maricourt first described the polarity of magnets in 1269. Basics of magnetism, e.g. B. the knowledge of the magnetic properties of the earth, contributed William Gilbert by proceeding systematically and experimentally, according to his suggestion one concentrated the lines of force at the poles of the magnetic stones with small iron caps. The long article Magnet in the Economic Encyclopedia by Johann Georg Krünitz reflects the unbroken fascination of magnetism, which was still unclear in its causes in the 18th century . In 1820, Hans Christian Ørsted discovered the relationship between electric current and magnetism. This was the prerequisite for the development of electrical engineering . 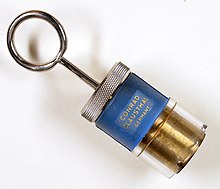 Permanent magnets (also called permanent magnets) retain this position for a long time after being magnetized. Today, metallic alloys made of iron , nickel and aluminum with additives of cobalt , manganese and copper or ceramic materials (barium or strontium hexaferrite) are used for production. Particularly strong magnets are made from rare earths such as samarium-cobalt or neodymium-iron-boron using the sintering process . Permanent magnets are used in compasses as magnetic needles, in electric motors , in electrical measuring instruments ( e.g. moving coil instruments ), in loudspeakers , headphones , microphones and guitar pickups, as well as in many other modern devices such as print heads for dot matrix printers , hard disk drives , actuators and sensors and metal separators. The simplest application as a holding magnet on iron keeps furniture doors, handbags, the lid of an extravagant cardboard packaging closed, decoration or information boards on sheet metal struts of a suspended ceiling, notes on a "magnetic board" (actually using a magnetic button on sheet metal), a smartphone with sheet steel on a magnetic holder , a warning or work light on car sheet metal, pseudopiercings on the cheek, for example.

With the aid of a magnetic body by another or by electrical current generated magnetic field can ferromagnetic substances temporarily (so-called induced magnetism ) or permanently by aligning the white areas will magnet itself.

This is how common permanent magnets are made.

Electromagnets generally consist of one or two current-carrying coils , mostly with a core made of a soft magnetic material , in the simplest case made of soft iron . This arrangement leads to a strong magnetic field , see electromagnetism . Electromagnets are used for numerous small and large technical facilities, e.g. B. separately excited electric motors and generators , relays , contactors , pull, lift and shock magnets, electric door openers.

Alternating current electromagnets can be found in membrane pumps (e.g. for aquarium ventilation) and vibratory feeders .

As a special case, deflection coils, for example in a cathode ray tube, do not have a core and thus act, as an air-core coil , also as an electromagnet.

With electro-magnetic filters, ferromagnetic solids can be separated from liquids. These solids consist mainly of iron oxides . These are filtered off, for example, from the circulating condensate of power plants and the circulating water of district heating networks.

From a magnetic flux density of around 2 T (saturation field strength ), the usual ferromagnetic materials for the core of an electromagnet are in saturation and can no longer contribute to strengthening the field. Without the support of the core z. B. as in an air core coil, significantly higher flux densities can be achieved, but with much higher energy expenditure.

When using superconducting materials to wind an electromagnet, it is possible to achieve magnetic flux densities of up to approx. 20 Tesla in continuous operation. Since the transition temperature of superconductivity drops sharply with such magnetic fields and current densities, the coils must be cooled to well below 4 K in cryostats filled with liquid helium by evaporative cooling at negative pressure.

A deflection magnet is a magnet (almost always an electromagnet) that is used in a technical device to deflect a beam of charged particles (e.g. electrons ) in a different direction. In this case, a coreless coil is also called a magnet.

Deflection magnets use the Lorentz force , which forces moving electrical charges in a magnetic field to change direction. If the field is homogeneous , the particles fly through an arc across the direction of the magnetic field . The magnetic field can be generated permanently or inductively . The latter variant allows rapid changes in the field strength .

The change in direction usually serves to focus or steer a beam. To deflect electrons, deflection magnets are components of:

In particle accelerators and their beam guides , too , charged particles are directed onto certain paths with dipole magnets .

Conversely, if the charge is known, the angle of change in direction allows conclusions to be drawn about the mass of the deflected particles. This is the basis of mass spectrometry .

If a magnetically recording data carrier ( hard drive , magnetic strip of a credit card , tape reels , etc.) comes near a stronger magnet, the acting magnetic field can lead to data loss by overwriting the magnetic information on the data carrier. A well-known example of this are the magnetic holders on folding tables in Interregio trains from Deutsche Bahn AG, which were not attached to the locking position (backrest) but rather in the table, i.e. incorporated into the table support surface. The hard drives of laptops on top were not only erased by these magnetic holders, but also damaged, and the loss of data could not be reversed. EC / credit cards are often destroyed at checkouts because some anti-theft devices are removed there with a strong magnet.