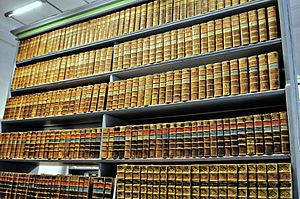 The complete works in the Upper Lusatian Library of Sciences

Title page of the 18th volume of the Economic Encyclopedia : “Economic Encyclopedia or general system of the State-City-House-u. Agriculture, in alphabetical order; by D. Johann Georg Krünitz, […] Eighteenth Part from Get to Glaze. Berlin 1779, by Joachim Pauli, bookseller. "

The Economic Encyclopedia is a German-language encyclopedia created between 1773 and 1858, largely by Johann Georg Krünitz . It is considered to be an important source of business and technology from the period between the Enlightenment and industrialization . 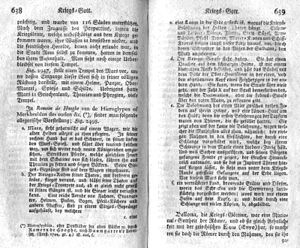 The entire work, structured in lexical and alphabetical order, comprises around 169,400 pages in 242 volumes, the individual volumes have between around 600 and more than 900 pages.

In the announcement of his work (1772), Krünitz notes the structure:

“The form of a lexicon, or the alphabetical order chosen by you, is, however, the most convenient for a detailed and cumbersome lesson, and the most reliable for the light of economic science, by one according to the various needs, and among people in general, and the economists in particular, to spread distribution proportioned to such unequal powers of the mind. It does not scare off readers who are afraid of the coherent and uninterrupted in learning and diligence, it entertains and satisfies the instant curiosity, and leads to the principles and the chain which connects all useful truths in common with one another. "

He writes about the procedure for processing:

“But since I am concerned with such diverse and different subjects as the statistic, urban, domestic and rural economy, about large and small, extensive works, where I soon turn to philosophy about legislation, cameral finance - and police establishments, soon have to let down to the slightest practical advantages and manipulations in factories and manufactures, in housekeeping and kitchen, in agriculture and cattle breeding, impossible to know everything myself, so my work consists actually in the fact that what I find out partly through verbal or written messages, partly in other printed sources, which I always faithfully and conscientiously report, find useful for my purpose, and bring it into an appropriate extract and context , and in the end I use all my powers of judgment. "

The articles are not structured uniformly: Their scope ranges from simple references to articles that extend over more than one volume “Administration (police)” (volumes 221 and 222) - other volumes, on the other hand, deal with up to 1,855 lemmas (volume 8 , Cha-Davier ). The complete work contains 9,398 illustrations on copperplate engravings, which, however, for reasons of cost, were included in the later volumes more sparsely than in the earlier ones.

The typeface of the first volume may be called “chaotic” because attempts were made to separate lemmas in French, Latin, German and other languages ​​by switching between Fraktur and Antiqua typefaces , as well as highlighting by switching between recte and italic and / or (in the absence of by changing the font size or by introducing an additional Gothic font. With the changed concept of a completely redesigned encyclopedia, this typographical “variety” was restricted from the third volume, “Eye - Farmer Wool”.

The Economic Encyclopedia is an important source for the economy and technology of the time between the Enlightenment and industrialization, although the last author, Hoffmann, was already aware that the work could no longer be up to date when it was completed.

History of the work

In 1773 the first two volumes of the encyclopedia, which Krünitz was to create on behalf of the Berlin bookseller and publisher Joachim Pauli , appeared.

From the first volume of "Krünitz", however, a work that far surpassed the original was announced. Diderot and d'Alembert had already had a similar experience, whose 28-volume encyclopédie (with 17 text and 11 table volumes), completed in 1772, was initially intended as a translation of the English originally two-volume Cyclopaedia (first 1728, two-volume, last, 1786, five-volume).

From the fifth volume on, Krünitz's encyclopedia was continued on the basis of lemmas that he had derived from the first German encyclopedia, the 64-volume work by Johann Heinrich Zedler , which was published between 1732 and 1754 , the Great Complete Universal Lexicon of All Sciences and Arts . The later authors of the Encyclopedia hardly seem to have gone beyond the list of keywords ascribed to Krünitz.

Changes to the range of topics and titles

The title of the work was adapted several times to the concept that changed during the development - with the exception of the last one, these changes were made by Krünitz.

Using his extensive private library of around 15,000 volumes, his profound language skills, his wide-ranging specialist knowledge and immense diligence, Krünitz had completed the first 72 volumes and, according to him, worked 12 to 16 hours a day. He had announced two volumes a year, but mostly three had appeared, sometimes four. As noted in the foreword to Volume 73, for example, he died while working on the article Corpse of Volume 73 on December 20, 1796.

His work had several post-editors (mostly one after the other) and was not completed until 1858 - with the 242nd volume:

Five entrepreneurs acted as publishers: Joachim Pauli from 1773 to 1812, then his widow Louise until 1823 , then her third husband CH Mowinkel . Around 1830 Leopold Wilhelm Krause took over the publishing house, which passed on to his stepson Ernst Litfaß (1816–1874) when he died in 1846 . Litfass brought the project to a close in 1858.

From 1782 onwards, Krünitz initiated a second edition of the early volumes. Volumes 1–97 were reprinted almost unchanged ( Lit. Cziesla ). Only individual pages and parts of preliminary remarks have been re-set.

There are also a large number of separately published excerpts from the encyclopedia of various sizes. Some of them were published by Joachim Pauli, some were edited by Krünitz himself. The 34-volume excerpt from the part of the complete work available at the time, edited by several authors, published by Pauli 1786–1830, should be emphasized. The project was abandoned according to Volume 34.

The famous pirated print , which the Brno printer and publisher JG Traßler published with imperial permission and with the support of the disgruntled former editor Flörke, is known as the Brno reprint , appeared 1787–1823, comprises volumes 1 to 129 and was banned in Prussia . Volumes 125–129 (1818–1823) are titled Flörkesche Encyclopedia .

Modern facsimiles and microfiche editions exist to a modest extent or in modest quality. The digitized and classified full text has been published online as the Economic Encyclopedia since 2001 .

As part of a digitization project funded by the German Research Foundation (DFG) from 2001 to 2006 and carried out by the University Library of Trier , a digital version of "the Krünitz" was created with a lot of background information. The lemmas of this free online edition are classified according to the international standard Dewey Decimal Classification (DDC). The most important bibliographical information cited in abbreviated form is resolved. All internal references in the text are linked hypertextually and the work can be searched using sophisticated search functions.