Antiqua ( Latin antiquus 'old', 'erstig') denotes fonts with rounded arcs that are based on the Latin alphabet and originally referred to models from Roman antiquity . Even five centuries later, the antiqua is still practically unchanged in extensive use. They and their mixed forms are the most frequently used print and cursive fonts for Western languages ​​today. This is why works from the Renaissance set in this font appear astonishingly modern.

Opposite it are the broken scripts , which are also based on the Latin alphabet, with broken instead of rounded arcs.

In the narrower typographical sense, antiqua is understood to be classic serif fonts with a clear line contrast , while serif-emphasized ( Egyptienne ) and sans-serif linear antiqua ( grotesque ) are not included, although these are definitely based on the antiqua in the general sense.

The Antiqua emerged in the epoch of humanism (15th century) in Italy as an initially handwritten book font. The term Antiqua is based on an error . The humanists of the Renaissance knew the ancient texts only in the form of manuscripts written in the Carolingian minuscule and assumed that these, like the Capitalis, came from ancient times . Therefore, they wrote in the humanistic minuscule derived from the Carolingian minuscule , which they combined with the capital letters of the Roman Capitalis monumentalis . The Antiqua fonts mimic the handwritten humanistic minuscule in typographical form, including this combination of uppercase and lowercase letters.

Use of Antiqua in Europe 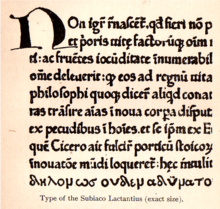 Sample of the early Antiqua form by Sweynheym and Pannartz (1465)

In 1464, Adolf Rusch used the first known Antiqua typeface. Then the Germans Konrad Sweynheym and Arnold Pannartz , who worked in Subiaco near Rome (1465), edited an early form of Antiqua for an edition of Cicero's De oratore . However, this was still very much attached to the Gothic tradition and could not be clearly distinguished from the Gotico-Antiqua . In 1469 Johann and Wendelin da Spira, originally from Speyer but active in Venice, developed a more formal form of the Antiqua. This was used by Cicero to print Epistulae ad familiares . Thanks to this typeface, Venice received the reputation of the most important center for the Antiqua.

The French Nicolas Jenson , who lived in Venice, developed the first qualitatively convincing antiqua in 1470. The characteristics of this typeface were the diagonal upward slash of the minuscule e, which came from the tradition of handwriting, and the upper endings of the uppercase M. It still had a few similarities with the handwriting (e.g. keeping abbreviations and ligatures ) without trying to imitate them. This typeface was imitated throughout Italy and remained the most frequently used type in the country until it was further developed by Aldus Manutius . 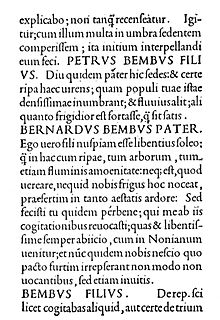 Page from De Aetna; printed in 1495 by Aldus Manutius in Venice

With the printing of Pietro Bembos De Aetna by Aldus Manutius in 1495, a new form of Antiqua was created. This font, the De Aetna-Type , departed more than Jenson's type from the handwritten model and was very much influenced by the Roman inscriptions in the design of the capitals. Another feature of this font is the contrast between thicker and finer strokes.

The humanistic cursive , a cursive font, was also received as a print in Venice shortly before 1500. In 1501 a book appeared in an antiquarian cursive at Aldus Manutius in Venice; this font was named Virgil. With this type, Aldus Manutius began an inexpensive edition of classics, the so-called Aldinen . A space-saving type of contemporary antiqua was necessary for this project, and this was achieved with the antiqua cursive. This writing became known beyond the borders of Italy.

Up until then, Venice, and thus Italy, had been the center of the new development of antiquated printing in the Renaissance . However, after the political division of Italy, France became the new center. The French type cutter Claude Garamond developed the perfect renaissance roman type. It was characterized by a stronger emphasis on bold basic and fine hairstyles and looked lighter than the previous fonts. A special characteristic of this typeface was, on the one hand, the small mark of the e, which inclined to the right in the upper part of the curve, and, on the other hand, the fact that the individual types had a different axis position. Claude Garamond also played an important role in the development of the antique cursive. What was special was that Garamond produced an antiqua font and the matching italic as a markup font at the same time. Garamond's typefaces were then used by many printers in the 16th century not only in France, but also spread in Antwerp, Basel and Frankfurt. This success was also due to the change in the overall conception of the book.

In the 17th and 18th centuries new impulses came from the Netherlands: for example from Dirk and Bartholomeus Vosken from Amsterdam or Johann Michael Fleischmann and Christoffel van Dyck from Haarlem. The differences between this font and Garamond's were among other things. a. in the larger count of the e, at the level of the minuscule n, it became larger and the serifs more refined. While the capital letters hardly have an oblique style, the lowercase letters can still clearly be seen from the humanist manuscript written with a pen.

The increased use of copper engraving in the design of fonts since the 17th century made it possible to create even stronger contrasts in the linework. The fonts were imported from the Netherlands until the middle of the 18th century, after which they began to be redesigned independently. The Dutch font innovations also influenced developments on the English continent.

The antiqua typeface, which was further developed in England, has a softer typeface and the capital letters are wider than the Dutch types. William Caslon is one of the main exponents of English type development. He was based on the fonts of Van Dyck, but with the new design placed less emphasis on the shape of the letters and more on the effect of the entire typeface. The most important position in England, however, is occupied by John Baskerville : The types that he developed can be assigned to the Baroque and are very easy to read. The typeface appears broader, the individual letters show strong contrasts in line widths, the capital letters have strongly emphasized serifs, the lowercase letters have diagonal strokes and the font axis is almost always vertical.

At the time of Louis XIV, France became the leading country for typeface design. When the Imprimerie Royale was founded, they wanted to develop a new typeface that could not be used by every printing company: this typeface was named Romain du Roi and was intended exclusively for the royal printing company. It was the first type in the Baroque style that was based on mathematical calculations and a precise construction plan. The Romain du Roi was used in 1702 for printing Médailles sur les principeaux évènements du règne de Louis le Grand . The characteristics are a consistently vertical shadow axis and serifs without a strong fillet. Despite the prohibition of imitation of this type, it greatly influenced the development of typography in France. Pierre Simon Fournier developed a copy of this font in 1737.

François Ambroise Didot (1730–1804) succeeded Fournier . This new development is characterized by an increased contrast between basic lines and fine lines, the hairlines of the hatches are even more delicate. If Gutenberg wanted the greatest possible resemblance between printed letters and manuscripts, copper engraving found more and more entry into the design of the font. The printed matter should now look like copperplate engraving. The same principles now applied to the uppercase and lowercase letters in this classical form of the Antiqua.

Giambattista Bodoni completed this classicist font in Italy. At the beginning he was strongly based on the Fournier type, until he published Q.Honoratii Flacci Opera in 1791, using a font that had its own character. After he had immersed himself in the classical art scene, he developed a font with an individual design that diverged greatly from the handwriting tradition. The typeface is characterized by the contrast between the different line widths, the serifs are thin and stand out from the basic lines.

The antique fonts of Venice spread in Italy, Germany, France and Spain. Until 1480 there were only ten antique types in Germany; with the interest in humanism , the use of these scriptures increased. The first to use an antiqua font in German-speaking areas was Adolf Rusch .

The printer and publisher Johann Amerbach from Basel spread the antiquarian typefaces in Germany and Switzerland with the printing of u. a. scholastic texts, dictionaries and Bibles. He owned 6 antique types. Basel became the center of the production of antiqua typefaces north of the Alps, but antiqua typefaces were also used in Augsburg and Nuremberg.

In 1525 one began to deal theoretically with the Antiqua. Albrecht Duerer wrote “Underweysung der messung mit dem Zirckel und Richtscheyt”, the first German-language book on the construction of antique letters. Earlier theoretical instructions for the design of the Antiqua had already been published in Italy: these books dealt exclusively with the capital letters, which were already geometrically formed by their origin from the Roman inscriptions. In contrast, the lowercase letters of the Antiqua came from the handwritten tradition. All of these publications deal with the geometric structure of the letters without, however, addressing the optical effect. The printer Johann Froben and the Egelnolff-Luther type foundry (17th century) were important representatives of the antiquarian typefaces.

At the beginning of the 16th century, the Gothic fonts were mainly used in letterpress printing. Italy was the first country where the antiquarian types found more general use. This was followed by France and Spain (first half of the 16th century), England (around 1700), Sweden and the Netherlands (in the 18th century).

Germany played a special role in this typographic tradition. Johannes Gutenberg developed the first German typeface , Textura , a broken script. About the Schwabacher it developed into Fraktur, which was used in Germany until 1941 as a utility font alongside the Antiqua. In contrast to other countries, which increasingly switched to the Antiqua typeface, it was not used more intensively in Germany until the course of the 19th century (→ Antiqua-Fraktur-Streit ).

The Antiqua typefaces are subdivided according to their time of origin and various design elements. DIN 16518 is a common, if somewhat outdated, structure for the German-speaking area .