The plaque honors Aldus as a great printer and typographer

After studying in Ferrara , Rome and Verona , at the age of around 40 he set up a printing company in Venice whose products were to revolutionize the world of books. In the Biblioteca Marciana there was an extensive collection of Greek manuscripts that had come to Venice through the foundation of the Greek Cardinal Bessarion . With a group of talented typographers , Manutius set out to publish these texts. His editions, the so-called Aldinen , were innovative, among other things because of their small book format, roughly equivalent to the octave , which could be produced relatively cheaply. In 1495 he published the first prints in the world in Greek letters. With his prints of Greek and Latin works of antiquity and humanistic authors such as Pietro Bembo and Francesco Petrarca , Manutius made a significant contribution to the development of humanism in Europe and to the rediscovery of antiquity during the Renaissance .

In Venice, Manutius lived first in the parish of S. Agostino, later in S. Paternian, where Andrea Torresano also worked, with whom he printed from 1495 and whose daughter he married in 1505. Margarete, the widow of the Frankfurt bookseller and publisher Peter Ugelheimer , also lived here ; with their support Manutius published the letters of Catherine of Siena in 1500.

It has occasionally been alleged that he died of an assassination attempt, while others report that he contracted an illness as a result of overwork, which he died of after a few months. The date of death is also given differently (February 5, 6 or 8, 1515).

Two memorial plaques commemorate him at Campo Sant 'Agostin. They are attached to the house in which his office was presumably located.

After his death, his father-in-law and his sister-in-law continued printing and publishing until his son Paulus Manutius (1512–1574) took over management in 1533 .

Manutius was a driving force in the rediscovery of ancient literature in the Renaissance. At the same time, he turned the craft into an art.

He maintained a learned society (also known as the academy ) in his house , which took care of the editing of these texts. Important humanists, including Hieronymus Aleander , Pietro Bembo , Erasmus of Rotterdam and Johannes Reuchlin , were among his circle of friends. From 1495 he published five books by Aristotle , followed by works by Theocrites , Aristophanes and Virgil , Juvenal , Petrarch, Martial , Thucydides , Sophocles and Herodotus , Euripides , Homer , Pindar and Plato . His most famous print was probably the Hypnerotomachia Poliphili by Francesco Colonna ( 1499 ) with excellent woodcuts . 1502 he moved the Divine Comedy by Dante Alighieri .

As a typographer, Manutius also had a significant influence on the still young art of book printing. He replaced the so-called Gothic script , the textura derived from the manuscripts, which was common in printing shops in the north of the 15th century , with new, artistic letters - the Aldin types , now called Antiqua . In the edition of Virgil 1501 he first used the cursive script (English italic ) whose invention then his signature cutter Francesco Griffo complaining for itself after it in 1502 divorced in dispute of Manutius and its competitor Girolamo (Gershon) Soncino was changed.

For the typographical design of punctuation , his editions of the works of Bembos and Petrarch were groundbreaking, among other things, through the regular use of the fixed point at the end of the sentence and the shape of the comma to mark periods within the sentence. 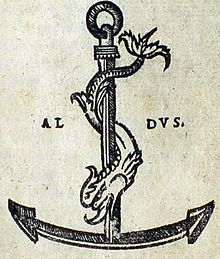 Printer's mark of the Aldus press

The printer's mark of the Aldus press shows an anchor and a dolphin: the anchor is a symbol for slowness, the dolphin for speed. It had been in use since 1502 and later featured in numerous emblem books. The motto formulated here in the picture is called Festina lente (hurry with a while). It is ascribed to Augustus and has come down to us in Sueton's biographies and the Noctes Atticae of Aulus Gellius .

Aldus' signet, which stood for the care and beauty of his prints, has been repeatedly copied by other printers in Europe.

It is assumed that the monk Makarije , who ran the first printing house in Southeast Europe, worked in the printing house of Manutius and acquired his knowledge there.

At the end of the 20th century, Aldus Manutius was given a late honor: The Aldus Corporation , a company that launched the layout program PageMaker in 1985 , paving the way for desktop publishing (DTP), named itself after the Venetian printer. In September 1994, Aldus merged with Adobe Inc. and is history too.

In Umberto Eco's novel The Foucault Pendulum , a glamorous self- publishing house is called Manuzio . A reputable science publisher by the same entrepreneur, on the other hand, is named after Claude Garamond .

In the novel The Odd bookstore of Mr. Penumbra by Robin Sloan his work plays a central role as a fictionalized version of Aldus Manutius and one dedicated to him fictitious secret society .