The title of this article is ambiguous. Further meanings are listed under 1502 (disambiguation) .

The Fourth Voyage of Christopher Columbus

The fourth voyage of Columbus

Landsknecht Joß Fritz initiated a Bundschuh movement in Bruchsal and Untergrombach . The places belong to the diocese of Speyer , whose bishop Ludwig von Helmstatt financed expensive buildings by increasing taxes and restricting the forest, pasture and fishing rights of his subjects. The articles of the Bundschuh movement demand the abolition of serfdom, the abolition of tithes and other customs duties, the elimination of noble privileges in the use of forests and fishing grounds, and the confiscation of a large part of the monasteries. The movement soon includes at least 7,400 people in the area between the Main and Neckar. Initially the occupation of Untergrombach and then a train to the margraviate of Baden are planned , but the movement will be betrayed in disregard of the confessional secret. Joß Fritz escapes, but 110 members are caught. Ten farmers are beheaded, quartered and hung on the country roads as a deterrent. 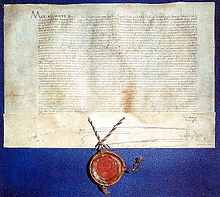 Certificate of founding of the University of Wittenberg with seal

Cinnamon from the Ceylon cinnamon tree

Auítzotl in the Codex Mendoza