This article covers the year 1507; for the maize variety see transgenic maize .

A Portuguese fleet under Tristão da Cunha and Afonso de Albuquerque conquered the Persian Gulf located at the entrance, strategically important base Hormuz , the cities of Muscat and Sohar , as well as the islands of Socotra by the Arabs and start there with the construction of a fort to secure the sea route to Portuguese India .

The Count of Lerín rises against Jean d'Albret , King of Navarre , and his wife Catherine . The exiled Cesare Borgia , brother-in-law of d'Albret, is sent to put down the uprising. During the siege of Viana on March 12th, he was killed in an ambush near Mendavia, which he was said to have recognized but ignored. The uprising, an aftermath of the Navarre Civil War , continued for the next few years and led to a decisive weakening of Navarre and, as a result, to the loss of its independence.

With the help of Piedmontese and French troops, Lucien of Monaco succeeds on March 19 in a great battle in the Republic of Genoa , which has been besieging the rule for 100 days , in which the fortress and a large part of the port are destroyed.

In the same year, the French King Louis XII. Acquire Monaco and capture Lucien. His brother Augustin , Bishop of Grasse, takes over the administration of the rule. He brings in experts to assess the value of Monaco. This results in a value of 166,000 ducats, which Ludwig cannot afford. Augustin does not agree to the exchange of Monaco for other fiefs.

Title page of the Bambergensis 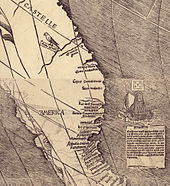 The German cartographer Martin Waldseemüller creates a world map with the help of his partner Matthias Ringmann . Together with a terrestrial globe and an inscription, it is to be seen as a three-part project, to which Waldseemüller gives the Latin name Universalis cosmographia secundum Ptholomaei traditionem et Americi Vespucii aliorumque lustrationes ( The complete cosmography according to the tradition of Ptolemy and Amerigo Vespucci and according to other illustrations ). At Ringmann's suggestion, the two scholars name the newly discovered countries in the west after the first name of Amerigo Vespucci, which is the first time that America appears on a map for the continent.

The annals of Tacitus are rediscovered in Corvey Monastery . It contains, among other things, sections on the Varus Battle and the Cheruscan Arminius .

After more than six years of travel through Asia occurs Ludovico de Varthema on December 6 aboard a Portuguese ship from Cannanore in Portuguese India from his home to Europe, which it around the Cape of Good Hope leads.

In the Aztec Empire , the last new fire ceremony under the zodiac sign of the fire drill takes place at the end of January / beginning of February under the rule of Moctezuma II . This celebrates the change in the 52-year cycles of the Aztec calendar .

Raffael paints the altar painting Entombment of Christ in oil on wood . Together with other works by Raphael, the picture forms the central part of an altar in the church of San Francesco al Prato in Perugia.

Cover of the Etterlin Chronicle

Petermann Etterlin , son of the Lucerne town clerk, publishes a printed Swiss chronicle . This is later criticized for its "French-friendly attitude".