This article explains the Yemeni archipelago, for the eponymous island see Socotra (island) , for the reef of the same name in the Chinese Sea see Socotra rock .

Socotra was part of Hadramaut Governorate until December 2013

Socotra (also Socotra or Sukutra , Arabic سقطرى Suqutrā , DMG Suquṭrā ; Names of the island in antiquity: altgr. Dioskouridou, Latin Dioscoridus ) is a group of islands in the north-western Indian Ocean that officially belongs to the Republic of Yemen . In fact, it has beenruledmilitarily and politically by the United Arab Emirates since April 2018.

The archipelago is located at the eastern end of the Gulf of Aden between 95.8 and 233 km from the Horn of Africa and 352 km south of the Arabian Peninsula . The archipelago includes the main island of Socotra , which is 3,625 km² in size and has 42,442 inhabitants ( 2004 census ), and the small islands of Abd al-Kuri (133 km², approx. 300 inhabitants), Samha (40 km² ), just a little further to the west , 100 inhabitants) and Darsa (16 km², uninhabited), as well as the uninhabited and maximally 80 to 85 meter high cliffs Ka'l Fir'awn (9 ha, north of Abd al-Kuri) and Sābūnīyah (5 ha, west of Socotra) ). The western tip of the island of Abd al-Kuri is about 100 km east of Cape Guardafui (the northeast tip of the Horn of Africa ). The main town Hadibu (also known as Tamrida or Hadiboh ), which is located on the main island, has 8545 inhabitants.

In 2003 UNESCO declared Socotra to be the first biosphere reserve in the Arab region, and since July 8, 2008, the islands have been declared a World Heritage Site .

The archipelago has a tropical, desert and semi-desert climate ( effective climate classification according to Köppen : BWh and BSh ).

Tectonically , Socotra is located between the Arabian and African plates . The islands are believed to have separated from the mainland over 20 million years ago. Like the subcontinent India and Madagascar, they once belonged to the supercontinent Gondwana and are therefore not of volcanic origin. The entire archipelago sits on a shelf base , which extends the north Somali mountains on the Somali Peninsula to the east-northeast and has a maximum depth of 914 m, but mostly less than 200 m sea depth. The archipelago is separated from the Arabian Peninsula by the Gulf of Aden , which is up to 5029 m deep . 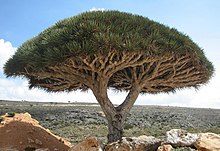 Socotra is also called the "Galapagos of the Indian Ocean". Due to the geographical isolation, numerous endemic species developed on Socotra , including six endemic bird species. Research has shown that more than a third of the islands' 800 plant species are unique to Socotra. The number of endemic plant species per square kilometer is behind the Seychelles , New Caledonia and Hawaii, the fourth largest on an island group worldwide.

Some parts of the coast are surrounded by dunes , which are among the largest coastal dunes on earth. Socotra is the home of the dragon tree species Dracaena cinnabari , a relic of the Cretaceous period , whose tree resin - the dragon's blood - is used for the production of natural remedies and incense . The dragon tree (also: dragon blood tree ) is a symbol of Socotra today.

733 species of fish from 108 families live on the coast of Socotra, most of them coral fish . The most species-rich are the wrasse (Labridae), followed by the gobies (Gobiidae), the damselfish (Pomacentridae), the sawfish (Serranidae) and the butterfly fish (Chaetodon). The most common species are the damselfish Pomacentrus caeruleus and the wrasse Thalassoma lunare . Almost all fish species on Socotra's coasts are widespread in the north-western Indian Ocean and the western Pacific, and there are only 4 or 5 endemic, that is, species found only here.

On the island group of Socotra, Soqotri, a Semitic language that belongs to the small group of the New South Arabic languages , has survived to this day . It has hardly been researched and does not yet have a sign system. 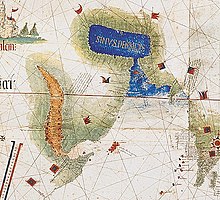 Detail of the Cantino Planisphere : the Persian Gulf , the island of Socotra (colored red), the Red Sea

In 1507, a Portuguese fleet under Tristão da Cunha and Afonso de Albuquerque landed at the then capital Suq in order to establish a Portuguese base, to hinder the Arab trade from the Red Sea and to free the supposedly friendly Christians from the so understood Islamic yoke. They built a fortress, but left the island four years later.

In 1834 Socotra was occupied by Great Britain. Because the British Empire wanted to rule the Gulf of Aden as the gateway to the adjoining Red Sea , Socotra became a British protectorate in 1866 . With the opening of the Suez Canal in 1867, this strategically important point became even more important.

The Oman which in 1891 also became a British protectorate was, raised repeated claims to the island. The British occasionally supported this position without actually handing Socotra over to Oman. Instead, the British surrendered the Churiya-Muriya Islands claimed by South Yemen to Oman in 1967 .

The island played a special role during the Cold War . The People's Democratic Republic of Yemen (South Yemen), which has been independent since 1967 and is friends with the Eastern Bloc , declared the island a restricted military area for strategic reasons. Warships of the Soviet Union carried out an amphibious landing maneuver on Socotra in May 1980 , two squadrons of Soviet Sukhoi bombers were stationed there.

With the unification of South and North Yemen, the island fell to the Republic of Yemen in 1990. Since 2013 it has formed its own governorate, Socotra .

In February 2020, a regiment of the Yemeni army stationed in Socotra rebelled and pledged its loyalty to the separatist “Southern Transitional Council” in Socotra, which was supported by the UAE.